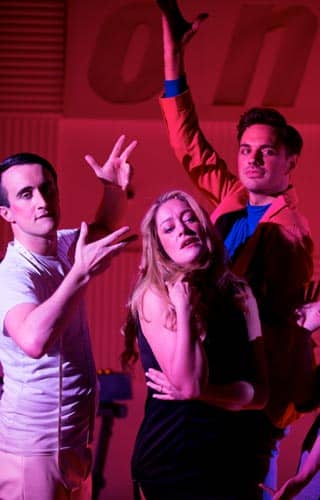 Atherton is that rarest of musical theatre performers: she can sing in pretty much any style and, no matter what she is doing, she is able to imbue her performance with undeniable spunk, endless charm and sensual allure. It is not every soprano who can play dowdy geek character, svelte seductive siren, and camp fetish magnet (complete with vinyl Nurse’s outfit just covering her pert derrière and barely containing her heaving bosom) seamlessly, as part of the one character – but Atherton manages that task with consummate ease in Shock Treatment, a musical now having its premiere stage outing at the King’s Head Theatre.

Directed by Benji Sperring and adapted, from the film of the same name, by Tom Crowley, Shock Treatment is billed in the programme as the “Equal” to its progenitor, The Rocky Horror Picture Show. While that claim is what the advertising industry might refer to as “mere puffery”, it is both untrue and self-defeating. Describing the show as the equal of The Rocky Horror Picture Show sets up expectations for the audience which will never be fulfilled, not the least because Shock Treatment does not feature the star from the original, Doctor Frank-N-Furter.

What Shock Treatment does have in common with its stage forebear is the notion of two geeky types, Janet and Brad, finding themselves out of their depth and seeking to find themselves and each other in a situation laden with sexual tension and frisson, replete with oddball, extreme characters, and a great deal of funky, catchy music.

The plot is wafer thin. Brad and Janet have been having marital issues. Brad has lost his job and Janet fears they are drifting apart. She volunteers them for a television show which promises to fix their problems. From there it is a frolic through madcap nonsense involving bizarre television hosts, the even more bizarre medico McKinleys, little black dresses, shock therapy procedures, closets being flung open, and a white vinyl costume parade.  Eventually both Brad and Janet are stripped bare, poked and prodded, shocked, and therapeutically revived – a black dress happy-ever-after jollity descends over all the land (here, Denton USA).

Tim Shortall’s set is a riot all of its own, a white wonderland which can serve as TV studio or clinical treatment room. A flimsy, moveable, flapping curtain gets a good workout to comic effect and Nic Farman provides a lot of fun through clever use of colour washes to supplement mood, enhance character or, occasionally, make a joke of its own. The costume design from Xylona Appleton is cheeky and very resourceful, especially when it comes to the vibrant outfits worn by the Hapschatts. For a venue as small and under-resourced as the Kind’s Head, the creative expertise assembled here is very impressive and their work collectively exceeds expectations.

Crowley’s adaptation of the film (the 1981 sequel to The Rocky Horror Picture Show) for the stage does not attempt greatness; rather, it functionally adapts the plot to provide a maelstrom of Carry On South Park opportunity to showcase songs, characters and concepts. It is funny, silly and a little bit sexy in pretty much equal parts, and provides real scope for good fun.

Atherton is the supernova of the production. She is in excellent voice throughout, bringing vibrant understanding to even the most banal tune here. Her capacity to convey wide-eyed Doe-like innocence is remarkable, especially when, at the same time, she can clearly articulate the rapacious sex goddess within. Best of all, she can achieve the reverse – and it is quite something to see the traces of girly virginal piety dancing across her features when she is either in black negligee or clinging white vinyl Nurse outfit.

In this way, Atherton’s performance encapsulates the underlying promise of the piece: Geeks and Outsiders can have sex, drugs and Rock’n’Roll too! So too do the two other magnetic, but polar opposite, performances of totally committed seductive power.

Ben Kerr is hilariously straight as Brad, the quiet, slightly dull husband of Janet with the body of a Greek God but no understanding of who or what he could be. Inevitably, Kerr is stripped to his underwear (much to the audience’s glee); less inevitably, Kerr manages to imbue a pre-Crucifixion Christ sensibility to what happens to Brad which is, startlingly and against the odds, poignant. It’s a gentle, touching performance, warm and thorough. His work in his final number, In My Own Way, is delightful.

In the opposite corner, gurning and swishing and mugging for all he is worth, Mateo Oxley milks every comic nanosecond in his turn as the outrageously camp, one-foot-leaping-out-of-the-closet Ralph Hapschatt. Oxley makes John Inman’s turn as Mr Humphries seem understated, but not in a bad way. His big numbers, Thank God I’m A Man and Breaking Out, are genuinely exuberant highlights and his work with Atherton in Me of Me and Little Black Dress, show-stopping. Yes, he pulls focus and, yes, he can take four laughs when one would do, but he is incessantly inventive and his work with Rosanna Hyland’s Betty is nicely judged and he bounces off the antics of Adam Rhys-Davies’ cheeky up-for-anything Cosmo very well. The Hapschatt tans should almost get their own bow.

After all of the assured excess in the body of the show, it was insightful to see Oxley squirming in his ridiculously short black dress for the finale, Anyhow, Anyhow. He had no reason to squirm, but it was a measure of the commitment to his outrageous performance as Ralph that the Oxley reality was markedly different.

Rhys-Davies and Nic Lamont make an interesting and wacky odd couple as dubious surgical duo Cosmo and Nation and they share synergy and focus as they rattle through the various plot contrivances with which they are involved. Likeable and affable, they are both very engaging and, occasionally, riotously dirty.

As Farley Flavors, the megalomaniacal media mogul, Mark Little brings miscasting to the table. He cannot sing remotely well enough for the score and his performance, though wild, was uncontrolled and, ultimately, unconvincing. He was neither extreme enough nor subtle enough to make a mark; there was little to admire.

As Musical Director, Alex Beetschen does an impressive and terrific job, although it has to be said that there were some serious sound balance issues (Chris Drohan, over to you) which interfered with the understanding of lyrics. Given the inherent need for the music to be pounding, diction and sound support are critical. Little, Hyland, Rhys-Davies, Lamont and Oxley all had real difficulty being heard at times; only in one case was that a little blessing.

In hindsight, O’Brien’s 1981 script is strangely prescient, especially with its focus on quick fix solutions, the wide-reach and unstoppability of reality television and that fact that, despite the passage of time, individuality and acceptance are not universal concepts. So while there is a real sense that this show is just shits and giggles, there is an underbelly of social comment which is worth reflection.

Shock Treatment is obviously a cult musical. The audience around me was singing along (often) and some were dressed in homage to their favourite film characters. But honestly, on this occasion, that simply added to the festivity.