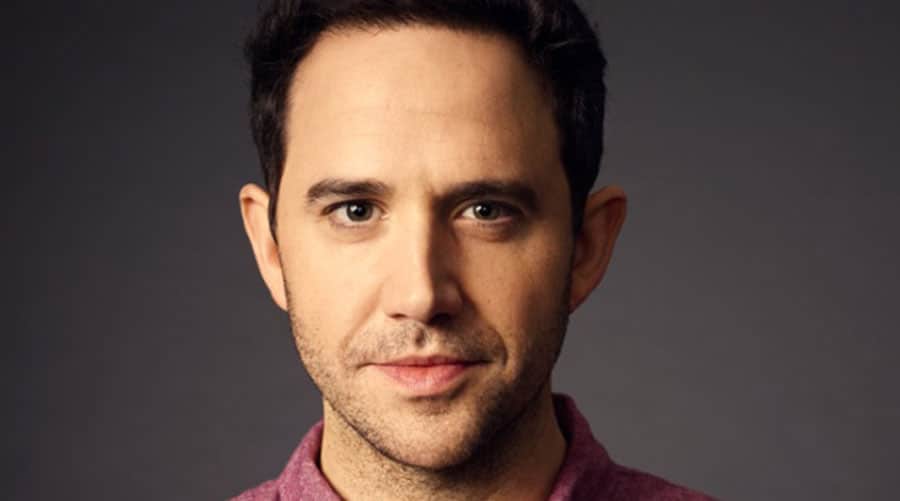 Santino Fontana is not – perhaps – a name very well known to British audiences, but such is the mission of this series to bring before the world’s eyes and ears celebrated luminaries of the Broadway musical theatre stage.

To begin with, a blast of muggy New York summer surged into our homes, not courtesy of this unseasonably harsh North American winter, but thanks to the carefree youthful charm of Rodgers and Hart’s Manhattan’.  Fontana gave it his best lounge singer spiel, and the game was afoot.

You see, Seth played a little bit of a fast one on his guest for this episode by not announcing the number in advance; he just launched into the opening vamp as if to say, ‘This is it, kid: SING!’  And Santino did.  All the way from his parents’ house in Richmond, …. Washington.  That may be about as far from the Big Apple as you can get within the continguous 48, but with Fontana around, one soon gets the feeling that we will never be far from the next wise-crack or dollop of smart, metropolitan banter.

He can act, too.  Seth reminisced on seeing him first on stage in Oscar Wilde.  And then we sidled into Bernstein and Comden and Green’s On The Town’, with ‘I’m So Lucky To Be Me’ – a chance for his lovely top notes to ring out bright and clean, including a top Ab NOT written in the score!  (If you want to stand out in this world, there is no sense in playing by the rules.)

It was very refreshing to get something from Alan Menken and Howard Ashman’s first venture, ‘God Bless You, Mr Rosewater’: ‘Dear Ophelia’, a pretty ballad with some scrunchily involving harmonies and truly surprising melodic twists.  Exceptionally well delivered by Fontana.  And thence to ‘The Fantasticks’, an Off-Broadway Ueber-Hit, whose run is – by now – probably actually longer than the total age of planet Earth (thanks to writers Harvey Schmidt and Tom Jones).  ‘They Were You’ is another exercise in charm for a tenor, and Fontana shows you exactly how to get the most out of it.  His voice is really fascinating, possessed by a kind of ‘dynamic warmth’ that resonates all the way through the middle register, spreading outwards and upwards: it’s a seductively pleasing sound that creates drama around itself, and so never cloys.

‘Joe, Joe, Joe’ from Frank Loesser’s The Most Happy Fella’ is a tour-de-force for a singing actor like Santino, and was our rehabilitation after his ‘worst ever stage accident’ story, a potentially fatal head injury that plunged him into a world resembling a particularly disturbing Ray Milland movie. But fear not, mortals: Rodgers and Hammerstein’s ‘Cinderella’ was waiting for him just around the next hairpin corner.  ‘Do I Love You Because You’re Beautiful?’, truncated to fit one voice (it’s a duet) was a nice bit of ‘late’ R&H.

John Battagliese came on next, winner of the ‘voice of the week’ spot, with a startlingly mature tone in his very youthful frame: another stunning find by the Seth detectives.  And so to ‘It Only Takes A Moment’ from Jerry Herman’s ‘Hello, Dolly!’  Exquisitely served up.  ‘Metaphor’, taking us back to ‘The Fantasticks’, followed this up, giving Seth a chance to garnish it with some fairly taxing vocal support.  (It’s so nice when in a cabaret the performers remember to pick the pace ‘up’ just as the show starts to wind down.)

‘When You’re Making Love Alone’ (Cheryl Hardwick and Marilyn Miller), came – as it were – next: a perky beguine from TV’s ‘Crazy Ex-Girlfriend’ series. This was fun (which is, I think, as it’s meant to be).  Then we found ourselves a little bit hungry, and so helped ourselves to 16 bars of ‘Vanilla Ice Cream’ from ‘She Loves Me’ (Harnick and Bock) with Mrs Fontana breezing operatically in to spoon it out: my, people come and go so quickly around here!

And then we ourselves got frozen. But first, we had to have more fun with, ‘I Am Gritty’, a neat, smart, very New York skit on ‘West Side Story’, smashed out in seconds by this master of his yet-another-vocal-turn-you-ain’t-heard-before-have-you? style.  If there were ever a simple, easy-to-understand reason for opening up the theatres again, then this guy, your honour, is it!  With that still ringing in our ear-drums, Kristen Anderson-Lopez and Robert Lopez’s ‘Love Is An Open Door’ (from the Disney movie where there is a lot of snow and ice as well as a great deal of singing) offered a hilarious Danny Kaye-esque auto-duet, complete with southern drawl falsetto for the female voice.  (Did he get the job, yet??)  Brooking no discussion, ‘Almost Like Being In Love’ (Lerner & Lowe) showed up again to ring down the Washington night, taking us back to his lounge singer persona, opening up a love-messaged medley for the most final of finales.

The show ran long, and deep and wide, providing plenty of fireworks and even a floor of lava (coded reference No.17).  Oh, yes: that was fairly bubbling by the time we crashed into the still uproarious play-out.  And that, ladies and gentlemen, is show business.