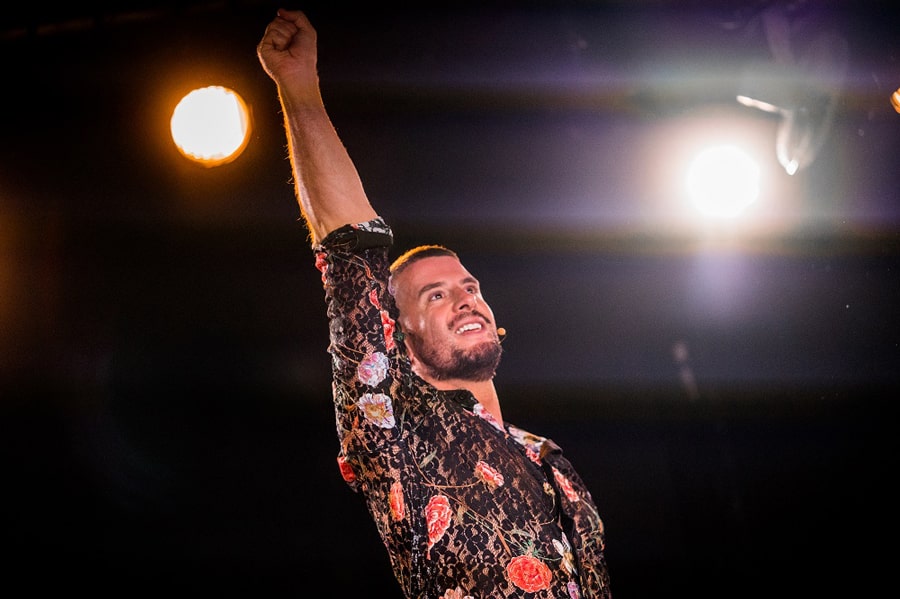 It is 50 years since the Stonewall riots kickstarted the global fight for gay equality and, while homophobic attacks and discrimination persist, huge progress has been made for LGBT+ people in Britain and the US. In his solo show, Riot Act, Alexis Gregory highlights some of the hidden, largely forgotten stories of this struggle over the past five decades and the emotional and personal cost of getting to where we are now. Based on interviews, he has constructed a fascinating piece that brings to life the experiences of three people who lived through key moments in recent queer history, from Stonewall to the AIDS crisis, assessed from a present-day perspective.

With a gravelly American accent, Gregory embodies Michael-Anthony Nozzi who, aged only 17, found himself in the midst of the Stonewall riots on his first day in New York City in 1969. He gives us an illuminating snapshot of the gay scene in Greenwich Village in the late 1960s and the everyday risks of police violence, culminating in the bloody attacks by police on the Stonewall Inn on June 28. He also takes us on to the 1980s and 1990s and the devastating impact of AIDS, recalling how in one month he lost 32 friends.

With a small costume change, Gregory transforms himself into British drag performance artist Lavinia Co-op, opening a window into the world of drag and the “gay lib” movement in London from the 1970s onwards. She talks of the subversive impact of drag – long before RuPaul took it mainstream – and her time with legendary radical drag cabaret group Bloolips. Finally Gregory becomes Paul Burston, now best known as a writer and the force behind queer literary salon Polari. He movingly recalls the horrific impact of AIDS and how it propelled him into activism through the ACT UP movement in London, helping to change public and political responses to HIV. He champions the kind of oral history that Riot Act is bringing to the stage, explaining that “a lot of times, official history is not the truth, or the whole truth”.

The importance of recording these testimonies is emphasised throughout, not least because AIDS killed many of those who were there. As Paul points out, “there was a break in the chain”. Lavinia also speaks of the need for the younger generation to hear the stories of those who came before as well as the need to remember those who have been lost: “We need a museum to explain all this sh*t!” Michael also regrets how younger men rarely understand the struggle that went before: “They have no idea what we did for them to have the rights that they have today so that they can ride on a float with their arse out and not be arrested.”

Through skilful dramaturgy of the verbatim accounts, Gregory draws out not just the sense of loss and grief but fear – fear of violence, fear of death. “It was liberating but scary,” Lavinia recalls, echoed in the accounts of both Michael and Paul. These men lived through it but, as they all point out, it isn’t until years later that they realise that these were such pivotal moments in history.

Channelling rather than impersonating his three witnesses, Gregory gives a masterful performance under director Rikki Beadle-Blair. It takes a few seconds to adjust to each new “character”, represented by minimal costume changes, but then you feel you are in the presence of someone who lived these experiences. At times, it is funny and celebratory but, mostly, it is intensely emotional, especially for anyone old enough to have lived through any of the events being recalled. This is a powerful and important piece of verbatim theatre that captures some of the joys, fears and losses of the last five decades of LGBT history.

Running at Arcola Theatre on 23 and 30 June 2019 and then on tour to Crewe, Norwich, Bristol, Oldham and Brighton.