Right Now at the Bush Theatre is one of the most unusual and “odd” productions I have seen of late. Originally written in Quebecois by Catherine-Anne Toupin, this English language version translated by Chris Campbell and directed by the Michael Boyd is deeply unsettling. A seemingly unremarkable couple move into a new flat and are accosted by their over-familiar neighbours. However, the pleasantries and badinage slowly morph into something more sinister.

The versatile space of the Bush is striking under the seasoned eye of designer Madeleine Girling. The living room set is composed of choice, original and unique pieces one can buy from certain commonplace catalogues. Oliver Fenwick’s eerie blue lighting floods the space like a fish tank and lends a cinematic quality to the end-on stage. Lindsay Campbell as Alice and Sean Biggerstaff as Ben are a fractious couple still grieving the recent loss of their child. An indomitable knock at the door heralds the arrival of the strangest neighbours one could conjure. Juliette, played by Maureen Beattie, her husband Gilles (Guy Williams) and their son Francois (Dyfan Dwyfor) are just utterly bizarre. And, to be honest, I might as well leave it there because things only become more confusing. 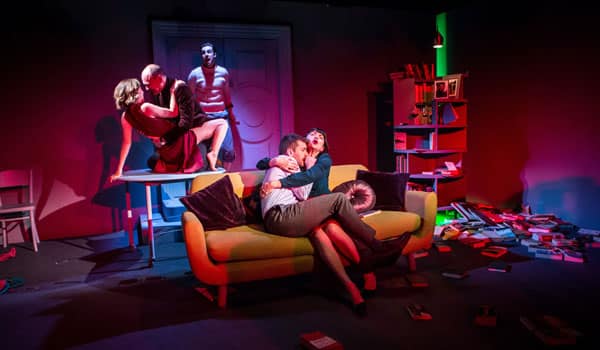 Rather than any attempt at a linear narrative, the plot develops through philosophical enquiry. Relationships and character seem as transient as paper and as ephemeral as shadows, the only victim of this being Alice who fights against the sadistic and perverted (in the most complementary way) whims of a playwright who evinces no sympathy for her stricken protagonist. A Freudian wet dream, the characters drink, dance and dare each other on further with party games and peculiar eroticism. To begin with, the young couple question the outlandish family, facing the audience and directing their dialogue straight out, but eventually they lose their intimacy and confidentiality in the mayhem of it all.

I think it is fair to suggest that Toupin has taken inspiration from Ionesco’s seminal play The Bald Prima Donna where, in a similarly claustrophobic environment over a similarly doomed dinner party, two couples fret out their time upon the stage in non-sequiturs and empty metaphors. However, the ground broken in the Romanian’s Theatre of the Absurd, Toupin seems to have finessed managing to earn real laughs as well as confront genuine trauma. Although this is a unanimously strong ensemble cast, the most affecting performance of the night for me belonged to Dyfan Dwyfor as Francois. A distillation of Freud’s Id, complete with banal expostulations and absolutely no filter, he twitches and gurns, juggling, cart-wheeling and cutting himself, desperate for his mother’s love and attention.

This production was designed to shock, and Michael Boyd seems to have enjoyed himself greatly after his liberation from the pomp and ceremony of the Royal Shakespeare Company. Without wanting to spoil the last scene, Toupin’s cruel game is finally shattered by a startling coup de théâtre; the gasp from the audience is palpable. Right Now defies definition, but one stark observation seems to be the universally testing task of raising children.

Right Now runs at the Bush Theatre until 16 April 2016