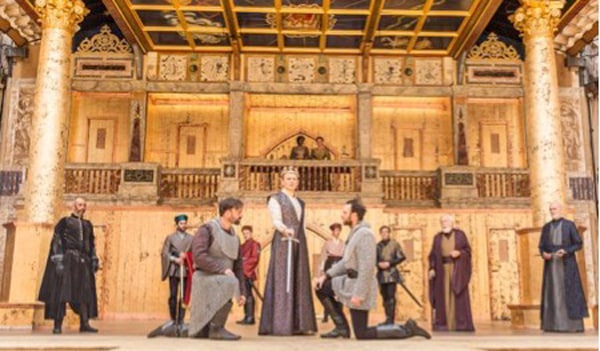 Briefly, one wonders whether the directors for this year’s summer season at the Globe received a memo requiring them to add either prologue or epilogue to the productions playing there as a way of unifying the season. Apparently, Shakespeare’s own ideas about how his plays should start and finish don’t cut the mustard anymore.

This one begins with pageantry. A king is dead; a procession leads a child king into his coronation. Everything is gold and ornate. The walls of the Globe have gone quite gold from grief. To the side and on the ceilings are ornate, glorious paintings. A palpable sense of the Golden Age is everywhere. The stage has been converted into a cross shape – so also ever present is the sense of divinity, of sacrifice, of duty.

The child sits on the throne. The musicians herald their new monarch. Then, in a moment that Bob Fosse might have created, there is a transition from child to man, and now the older monarch is on the throne. And, quite literally, the air is filled with gold. Thousands of tiny glittering gold squares cascade from the heavens and, like a shimmering tornado, envelop everyone. The sense of the monarch, his obsessions with the glamorous things in life, his excesses, his champagne tastes, his enjoyment of pomp and ritual, his belief in his own divinity, a lifetime of getting his own way – all this is made crystal clear in this arresting image of wild, golden grandeur.

This is Simon Godwin’s revival of Shakespeare’s Richard II, now playing at the Globe Theatre. Paul Wills has transformed the look and feel of the usual Globe setting: I doubt the playing area has ever looked so good. His set design is both overwhelmingly beautiful and delightfully simple. In the second half of proceedings, when Richard is the breathing embodiment of that well known Shakespearean truth – All that glisters is not gold – the lights show up the flaws in his gilded environment. The burnished effect is emphatic, increasing in intensity as Richard’s fortunes fade.

Richard II is a complex and fascinating play, one that has an excess of political power play and a raft of characters who see duty in various different ways. On one level, it sets up the War of the Roses and is concerned with the dangers to the realm when the line of succession is unclear. At another level, it is a potent reminder that while Monarchs might be powerful, even divine, in truth their power is only as certain and strong as the combined goodwill each has from the Lords of the land. Capricious indifference to those upon whom one relies for support, taxes or armies, is not a recipe for success.

It is a play full of symmetry. It opens and closes with a monarch slain and grieved over. Richard has a trio of “caterpillars”/advisers; Bolingbroke also has three key advisers. A deadly earnest call for a duel begins the political wheel spinning; a more ludicrous one occurs at the start of the second half of the production. John of Gaunt waxes lyrical about the kingdom, “this sceptred isle”, and, later, Richard sits upon the ground “to tell sad stories of the death of kings”. Godwin sees all of this, and presents the machinations and intrigue with clarity.

But seeing a jewel clearly and appreciating its depths, flaws, and multi-faceted possibilities, when it is set in the light, are quite different things. Godwin tells the story of Richard II but does not shed much light on the main characters, their subtleties and nuances. This is, however, a perennial state at the Globe, where the focus almost always is on humour and audience interaction at all costs. 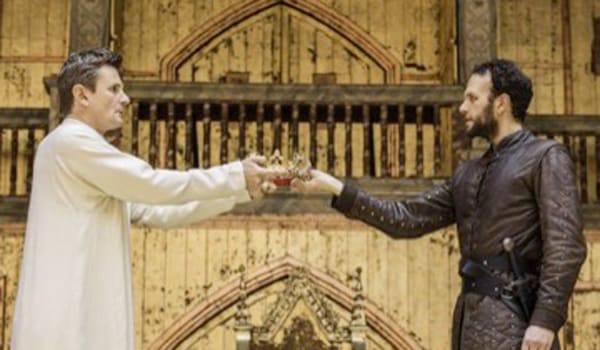 Charles Edwards brings his assured comic sensibilities to the role, with the result that his Richard is curtly funny, waspishly and camply cutting, knowing, and awash with hubris. This ensures many satisfying moments of comedy and Edwards treats the text almost as if it was Coward or Wilde. He lightly deals with the more sombre aspects of his character – so there is never any profound sense of concern at his fall. Indeed, while you might laugh with and at Edwards’ Richard, you don’t really care for or about him.

He manages the text well enough, but there is little effort spent on enjoying the verse or making it come richly and vividly alive. This is inevitably concomitant with the pursuit of laughter. There is never a clear sense of his relationship with Aumerle or any of his “caterpillars”, or of the complexity of his feelings about his Uncles or his relationship with his people and his sense of loss when Bolingbroke takes the crown. The rich core of the character is never closely explored; the beauty of the text is never given full value; and the thrill of discovering Shakespeare’s most deluded monarch left largely unfelt. Largely, this is a direct result of the Globe space and Godwin’s choices, but Edwards, gifted though he is, in far from an obvious choice for this particular Richard.

William Gaunt, on the other hand, is an ideal John of Gaunt, not the least because of his surname. Alone of all the cast, Gaunt takes on the vocal challenges of the verse, and it is rewarding indeed to hear his delivery of the great speech where the King’s uncle waxes lyrical about the King’s land. Unfortunately, on press night, his performance was undermined by a calamity in the audience – a collapsed viewer needing medical attention. The ruckus occurred in the middle of the scene where John of Gaunt tackles his monarch nephew about his failings as the custodian of the land. Like a true professional Gaunt carried on undeterred, but, through no fault of his, attention was diverted from him. It was difficult indeed not to shout out “start the scene again” when the audience calamity was quietened – because his performance deserved undivided attention. 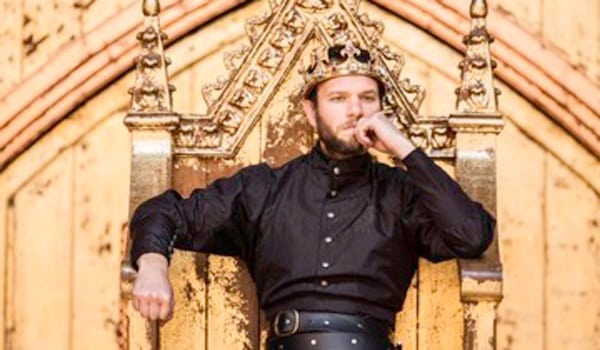 Of the rest of the cast, the most impressive was David Sturzaker, whose Bolingbroke was infused with masculine authority, haughty hereditary entitlement and a fierce political ambition. Sturzaker provides a strong, centred counter-point to Edwards’ flighty and capricious Richard. Unafraid to show uncertainty and fear along the way, Sturzaker presents a complicated Bolingbroke, making sense of the comedy and development of Kingly skills. He occasionally shouted but this was not a consistent issue; mostly, his delivery was thoughtful and careful.

William Chubb was inconsistent as the Duke of York. Some sections were very well done, but in others he seemed lost at sea. This may have been a result of the comic pulse of the production, but, at least in part, it was about Chubb’s connection to text and character. Graham Butler, playing his son, Aumerle, seemed to enjoy himself immensely as the effete, insinuating confidante to the King. Drenched in prissy and trizzy tics and tricks, including a costume which seemed more dress than tunic, and a walk and stance that would not have been out of place in La Cage Aux Folles, Butler’s Aumerle was an unashamed fop, a spoilt out-of-control brat with an imprecise understanding of politics and the right way to curry favour. In both cases, the comic extremes of the character were well achieved, but the darker, more complicated aspects were largely unpursued.

This is a light-hearted and superficial version of Shakespeare’s play. It seems to take its measure from Bolingbroke’s line in Act Five: “Our scene is altered from a serious thing”. (Sturzaker delivered this line with a knowing exactitude) There is much more to this play and these characters than is investigated or delivered here – but nevertheless the story is told in a very enjoyable way.

You would probably only feel unease if you already knew the text.