As I came away from the opening night of this production, I had one question foremost in my mind: why would anyone actually want to come and see it?  I mean, when they know what it’s really like?  Eventually, the answer to this conundrum became clear: because they are a friend or – more likely – a relative of the writers, creatives and producers.  I could think of no other circumstances in which attendance would be deemed necessary or desirable.

It isn’t every day that a show this bad comes along.  But here it is: a very dull pastiche 1930s musical comedy that in its floundering attempts at struggling into dramatic life is not shy to rope in every tired out cliche and worn through situation or character trope, cobbling them together with little regard for dramatic shape or plausibility, shoe-horning in a generous clutch of (mostly, but not quite all) period-style musical numbers, and occasionally bursting into frenetic, over-emphatic dance episodes.

The songs, composed through long years of artistic inactivity by composer-lyricist and now retired marketing executive, Alick Glass, do – now and then – exhibit a certain lyrical flair; some of the couplets rhyme in a pleasing and even enchanting way.  However, Glass is rarely able to sustain the discipline demanded to create whole songs of the same quality – he lets in too many details that are just not of the same calibre.  When it comes to tunes, he is too ready to borrow too closely from existing models: eg. a French-language chanson triste comes closer to its model, ‘Autumn Leaves’, than I would want to risk letting fall into the hands of any self-respecting copyright lawyer.

And that, ironically, is very much the point.  This is yet another re-telling of the ‘I-sent-a-story-to-a-magazine-and-they-sold-it-to-Hollywood-as-a-hit-movie-without-my-permission-or-even-me-getting-a-red-cent-out-of-it’ model.  Glass has collaborated with his daughter Suzanne on the ‘book’, which is a scenes-by-numbers affair in which exposition is always uppermost in the authors’ minds and dramatic structure, or simple dramaturgy, a distant memory.  For a while, I thought about all the notes I could give the authors on how to tidy up the mess they have created, but – after about 15 minutes – I was so overwhelmed by the problems they have made for themselves that I gave up. 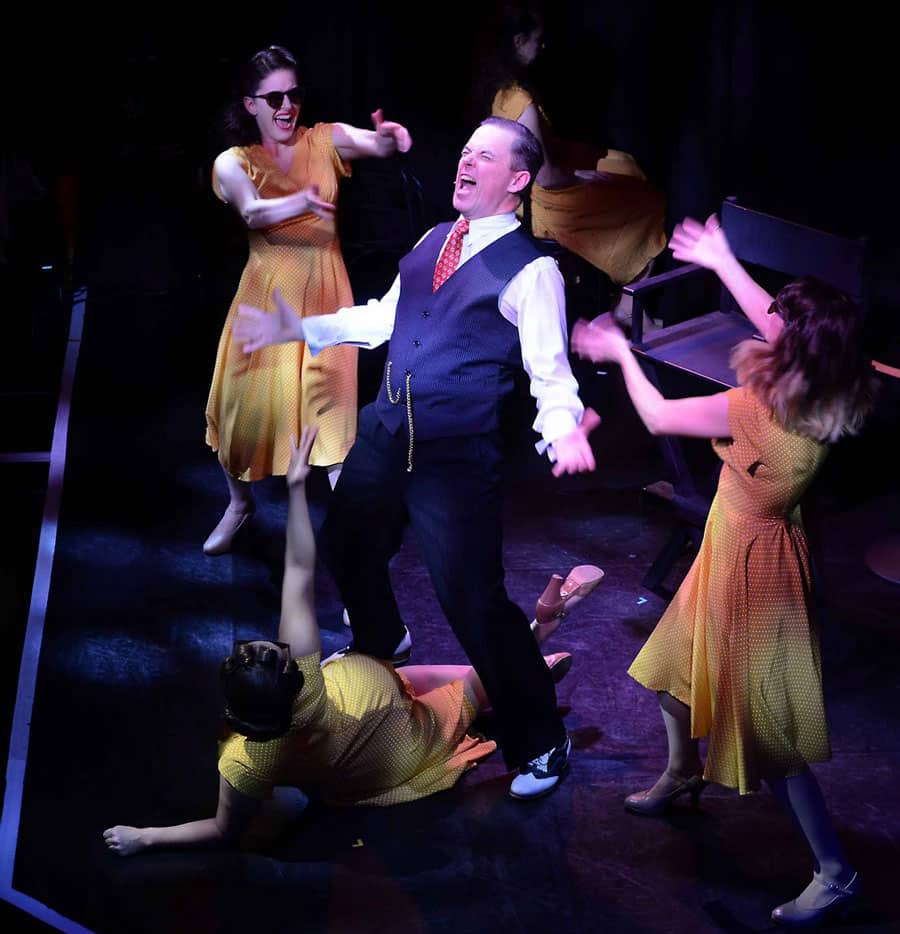 Glass reports in the programme that Sammy Cahn advised him 35 years ago to find a composer and ‘try to write a musical for the stage, however difficult and however long it takes’.  So, no need to give up yet. (Tellingly, I think, Cahn did not recommend he use his own music, as he does most of the time here, regardless of how much it sounds like that of other composers.)

The cast are all industry regulars, or newcomers, and do what they can to polish this rubbish into some kind of presentability.  They seem only too well aware that what they have been given to work with is a hodge-potch of other shows: Jeremy Secomb is asked to give us bits of the rascally defence lawyer in ‘Chicago’, mixed with the rapacious newspaper editor in ‘Sweet Smell of Success’; Cory Peterson has to wheel out a string of Gilbert and Sullivan patterers; Maddy Banks must emote, emote, emote as the doormat would-be novelist who pens a winning yarn (father and daughter Glass are not afraid to be conservative and misogynistic in their representation of women… if anybody still has a stomach for seeing that sort of thing on the stage: I don’t.)

And so on.  Ed Wade gets to show off his luscious light tenor in a song that is a stand-in for ‘I Have Often Walked Down This Street Before’ – or is ‘Too Many Tomorrows’? – only not nearly as good as the real thing.  And Lauren Ingram, Charlie Cavanagh, and first-timers Charlie Dennis, Eleanor Tollan and Priscille Grace make up a hard-working female chorus that does its best to make Tamsyn Salter’s effortful choreography seem as natural and human as possible (Salter herself has to stand in for the ‘deportment teacher’… I said it had every cliche).  Recording and performing musical industry pro-Warren Wills leads the reliable trio and – much less securely – directs the play: another industry stalwart Nick Richings lights the results.

Normally, when confronted by a debut musical play, one tries to be kind, but in this instance that would just be wrong.  These are people who really ought to know better.  They had an industry workshop at Pineapple not so long ago and by then they should have noticed that the show is in deep trouble.  It’s only fair to potential audiences to alert them to the fact that, should they opt to go and investigate for themselves, then it is they who will be in trouble.