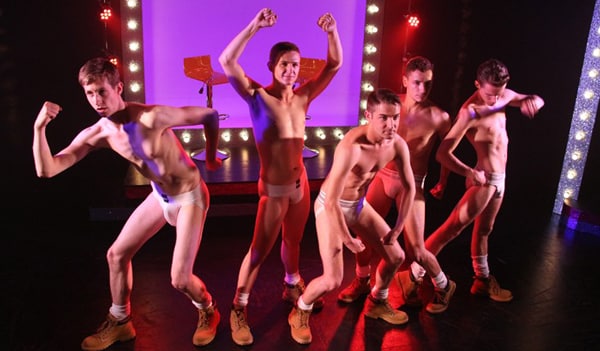 Theatre is often thought of as pure escapist entertainment, especially musicals, so it is always interesting to encounter a piece of theatre which inspires a need for research. And so it was with Rent Boy, The Musical, now playing at Above The Stag Theatre, in a production directed by Robert McWhir.

One of the best numbers in this show, combining excellent choreography (courtesy of the very talented Carole Todd) with a catchy melody, is “Who Invented The Jockstrap?”, and as the ensemble attacked tune and routine with undiminished vigour, I found myself wondering what the answer to that question was. It was certainly a question that had never occurred to me before. It turns out it was C. F. Bennett in 1874 – see, musicals can be educational!

This is completely as-it-says-on-the-tin musical theatre. The title suggests risqué goings-on, dollops of double entendre, and chorus boys dressed in very tight pants: Roger de Bris heaven. And the production delivers in all those respects.

If the team behind the Carry On Gang films were still writing now, they might have come up with some of the silliness here:

If you need a hammering
I’m the one who can.
I don’t want to hear you yammering
Learn to take it like a man.

Subtlety is not at a premium here – but then it doesn’t need to be. Nothing about the production seeks to be worthy or important: it is an exercise in good fun, and if you go along looking for a laugh and nudity of the burlesque kind, you are likely to be substantially rewarded.

The book and lyrics, by David Leddick, are rudimentary but inoffensive. It’s more a scrapbook of thoughts and sketches than a book musical, but it’s unlikely its intended audience will care. Centred on an awards ceremony for, essentially, Rent Boy of the Year, the piece careers from career (of one category winner) to career (of others) with a few loose “interviews”, between Awards Show Host (subsequently Hostess as Act Two opens in a kind of homage to Billy Flynn) and winners, thrown in for good measure.

There is nothing revelatory about the tale and the usual “it’s just sex” tropes endlessly wheel by. However, part of the tapestry of the piece as a whole is a kind of reluctant/hesitant love story between one of the Rent Boys and a lonely, gentle client who thinks they can have a “real” relationship. This is, to say the least, clunkily interwoven with the ribald frivolity and it is near impossible to regard it seriously – and if it were not for the commitment of the specific performances, and, presumably, McWhir’s desire to make the piece slightly more intriguing than one would expect, this part of the show might have been lamentable. But it is not; its reasonably sensitively handled, and does, in fact, raise interesting issues. In almost exactly the same way (and tone) that the successful film, Pretty Woman, did in the 90’s.

Suffice to say that credibility is not required to be suspended: each of the cast presents and convinces as a possible Rent Boy, certainly in terms of appearance, attitude, and ease with states of undress. And the show never works better than when the Camp meter is at maximum, and the attitude is more Gypsy Rose Lee than musical. The highpoints here include a pouting, hip-thrusting Cell Block Tango cousin, “Pete’s Tool Rental”; the over-the-top drag routine that starts Act Two (complete with large white feathers, a tease of a strip, and two bare-chested attendants) “I Have My Fans”; the aforesaid “Who Invented The Jockstrap?”; and the lively “All My Dreams In A Row”.

Andrew Sargent’s pastiche score is tuneful, zippy, but ultimately forgettable. Michael Webborn’s musical direction is sound and the recorded accompaniment somehow precisely fits the mould of the tacky affair the Awards ceremony would be. There are, however, some sound balance issues – more, it seemed, a question of the performers needing to properly support their voices to ensure appropriate projection than anything else.

David Shields provides a suitably grimly glittery setting, but his costumes are wickedly amusing. The gold waistcoats are a particularly inspired touch. Chris Withers’ pragmatic lighting design ensures everyone can be seen in a good light, and that what needs shadows gets them.

The star of the show, in truth, is Carole Todd’s spirited, cheeky, and knowing choreography, which brings out the very best in the cast and masterfully establishes high readings on the happy barometer of the mood in the auditorium. The cast might not be real hookers, but they are all good hoofers.

The stand out was Aaron Jenson who was suitably edgy as Edge, was completely unabashed whatever the script required, and who danced with real style and flair. Frank Loman keeps proceedings moving as the MC, a kind of Graham Norton on LSD character, all big gestures and snide, swollen retort – and his drag moment is very funny too. Lucas Meredith is hilarious as the MC’s hapless, but waspish, glamorous assistant, making quite a lot out of little.

Samuel Clifford and Conleth Lane do admirable work as the will they/won’t they pair of client/service provider tentatively expiring the possibilities of a true emotional relationship. Although the writing is twee, the pair play it straight (well, you,know what I mean) , and the result is genuinely touching. There is good work too from Marcus Grimaldi, Phil McCloskey and Henry Collie (who is this production’s answer to Dirk Diggler a la Mark Wahlberg).

All the cast have sound singing voices and mostly the diction is excellent. It did, however, seem that most were used to relying upon amplification to get their voices to the back of the auditorium. In a small space like Above The Stag, this should not be necessary and was disappointing.

Still, the energy, commitment and enthusiasm of the mostly young cast can’t be faulted. And although the raw material may not be scintillating, McWhir’s skills shine in making the whole much greater than the sum of its parts. It’s intended audience (Above The Stag is the UK’s only full time professional LGBT theatre) will doubtless enjoy it – but, actually, anyone with a sense of humour will find a lot to like here.