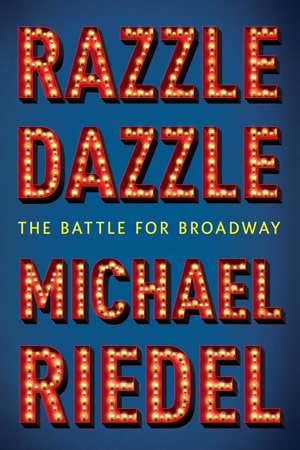 Can you imagine New York without Broadway? It’s unthinkable today, but by the mid 1970’s, Broadway was almost out for the count.

Michael Riedel’s stunning new book Razzle Dazzle charts the rise of Broadway and introduces the key players in The Shuberts and The Nederlanders, who today remain the dominant forces in the Broadway theatre community.

It charts Broadway’s history through to the 1970’s when due to the vice on the streets of New York and the poor financial health of the city, the Broadway theatre district very nearly became extinct, and the artistic and managerial forces of a few extraordinary individuals who stepped in, and through extra-ordinary measures ensured that Broadway was restored and developed into what we know and treasure today.

Riedel’s book is exceptionally well researched and pulls no punches in his assessments of some of the major players in this century long saga. As a fan of Gerald Schoenfeld’s memoir Mr Broadway, it was interesting to see Schoenfeld and Bernie Jacobs of the Shubert Organisation presented with perhaps a few more foibles, but with ultimate admiration for their efforts in restoring Broadway.

Razzle Dazzle gives the reader a warts and all feeling for not only the major players, but the major scandals and the behind the scenes machinations of Broadway including the “Ice” scandal that very nearly saw a lot of Broadway theatre staff and management indicted on corruption charges.

It was Schoenfeld and Jacobs, the lawyers for the Shuberts who following a board room coup, set about trying to put Broadway back together. With theatres being bulldozed for car parks and the 17 Shubert Broadway houses being valued at less than $1million (unthinkable now), they worked with the likes of Michael Bennett, Andrew Lloyd Webber and Cameron Mackintosh in the monumental task of re-establishling Broadway.

Through the auspices of the Shubert Organisation, they encouraged producers and writers, helped to engineer new urban policies for New York and were instrumental in the clean up of the Times Square area, turning it from a dangerous neighbourhood, to (with the introduction of Disney), a family friendly destination.

It’s incredible to think that following all of these events Broadway is now stronger than ever, with shows queuing up to play in Broadway theatres.

It’s obvious that Riedel holds a supreme love for his subject and respect and admiration for many of the people who play parts in the latter part of his book – those who helped save Broadway.

Michael Riedel is to be congratulated on this great history of Broadway. It’s a riveting read for any fan of musical theatre on the Great White Way. It brings all of the players in the great Broadway drama to life and regales the readers with those fabulous anecdotes and memories that true fans of Broadway die for. For musical theatre fans, the chapters on Michael Bennett and the British invasion of Broadway are irresistible.

With Christmas coming up, Razzle Dazzle would be a perfect gift for any friends who eat, sleep and breathe Broadway. I know that I’ll be having my third read of it over the Christmas break.

Buy a copy of Razzle Dazzle from Amazon.co.uk