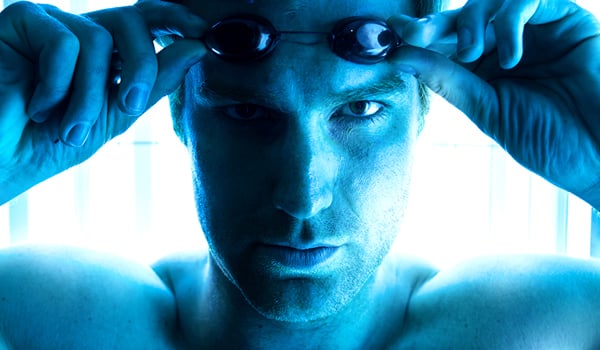 Raz transfers to the Trafalgar Studios 2 from 22 March. Book Now!

In the 1980s and 1990s, Jim Cartwright won acclaim for plays depicting Lancashire lives such as Road and The Rise and Fall of Little Voice. He has returned to this world for his new one-man play, RAZ, capturing the energy and desperate drive of a lads’ night-out in Bolton. It is told through Shane, a young truck driver who lives for the weekend when he can dose up on beer and drugs and try to forget about his lowly paid job and ex-girlfriend.

James Cartwright (who happens to be the playwright’s son) holds your attention from the start, appearing on stage in just goggles and a pair of Superman underpants as he primes himself for the evening ahead with a “nine-minute blaster” in The Tanning Shop. We see him go through the rituals of preparing for a Friday night “on the raz” as he marshals his mates Robo, Micksy, Sparky and Staunton over the phone for a night of pubs, clubs, beers and recreational drugs. In a high-powered, bravura performance, Cartwright brings us these characters and more, under the sharp, precise direction of Anthony Banks.

With its rugged, vernacular poetry, the play provides no clear solutions or resolutions, leaving us with the sense that this merry-go-round of decadent nights out will continue every weekend for Shane and his friends, presumably until they finally meet a girl and settle down. Stumbling upon an open-mic night at one pub, Shane takes to the stage, ranting about “government” and how it has created a “generation that got forgot”. But he also talks of the Friday night rave-up as a continuation of what his parents went through as well as an experience that, in different forms, dates back to the Stone Age. But, social commentary aside, RAZ takes us on an entertaining rollercoaster of a ride through the joys, frustrations and heartache of the kind of night-out that happens every weekend not just in Lancashire but in towns and cities around Britain.