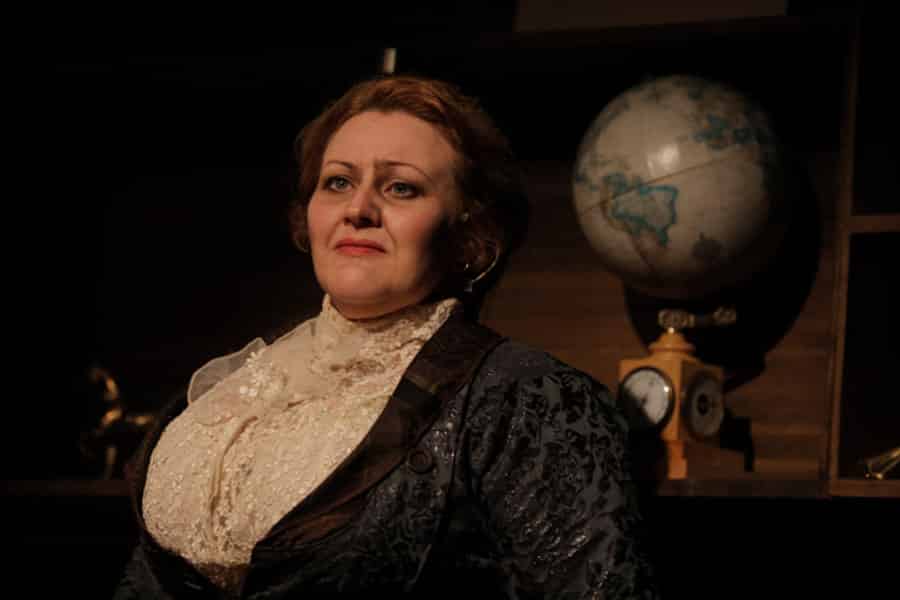 This is one of the finest, most delightful musicals currently on offer in London and nobody who loves such theatre and is within reach of the venue should allow the next four weeks to go by without doing their best to see it.  Michael John LaChiusa’s remarkably symphonic, often through-composed meditation upon the life and character of Anna Edison Taylor, the first human being to go over the Niagara Falls and survive to tell the tale, premiered in the USA eight years ago and this first UK production opened earlier in the spring at the wonderful Brockley Jack Studio in South London.  Already recorded as a double CD, that production has subsequently transferred to this Off-West End house in a much augmented and redirected form.  It looks as good as it sounds and provides an involving, different kind of story to see, one with abundant relevance to our time. 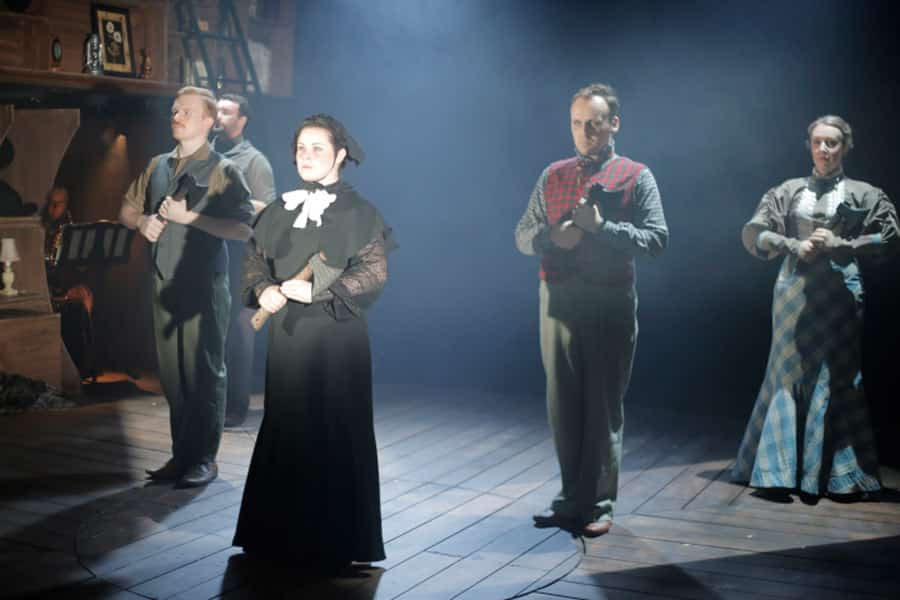 Director Dom O’Hanlon responds to it in the same way as I have seen him do everything else with music theatre: as a play.  There is nothing in his world to separate the actors speaking and singing, which is all the more astonishing because the music they have to sing is anything but conversational in manner.  LaChiusa is hugely talented in all disciplines of writing text, lyrics and the score, and here he assumes a palette of ‘period’ styles that trick the ear into believing we really are at the dawn of the 20th century: there are cake-walks, and waltzes, ballads and marches, operetta and operatic sounds reaching from Sousa to Irving Berlin to Charles Ives or Richard Strauss; and then, we get echoes of more contemporary genres, like the clever artistry of Sondheim.  Brilliantly tuneful, and fantastically well-orchestrated by Michael Starobin for a conventional pit band of eight (keys – Erika Gundesen, Ashley Jacobs; strings – Grace Buttler, Hannah Thomas, Jack Cherry; French horn – Maude Wolstenholme; and reeds – Claire Shaw, Simon Williams), combined with the first-class voices of the cast of seven (three women, four men), this is one of the richest sounds you will hear at the moment in London. 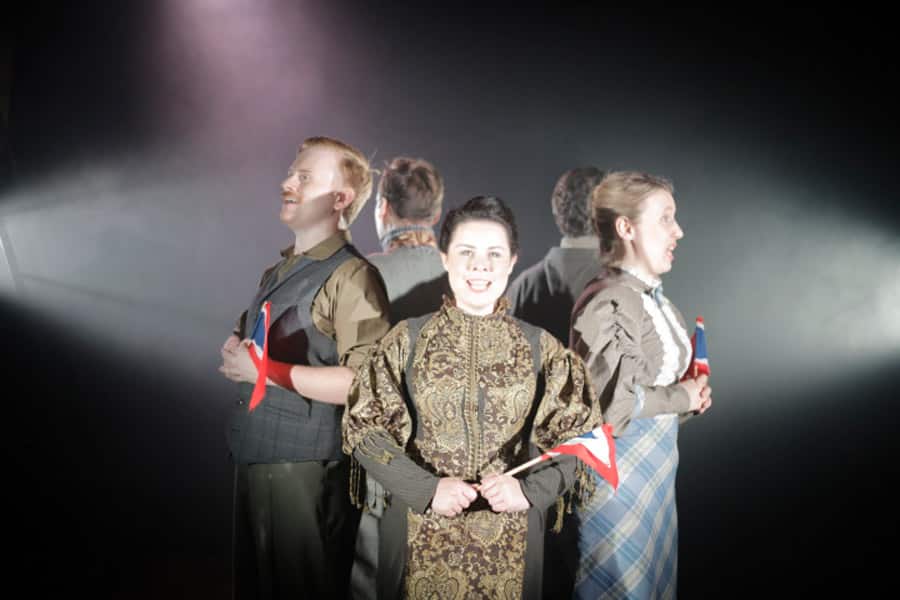 But the deciding factor in performance has to be the magisterial presence of musical director and conductor Connor Fogel, who manages the enormous score with aplomb, achieving impeccable balance (also thanks to Adrian Jeakins’ perfectly judged sound design, with deputies Henry Whittaker and Chris Love), and a clarity of expression that might easily defeat a lesser professional.  Here, the forward impetus of the show is never in doubt; the pacing is faultless with a score which, unlike so many conventional shows, continuously builds and increases in tension right up to the very last moment.  In fact, it functions much more like an opera than anything else, with each number building on top of its predecessor to take us on a musical journey of discovery and revelation. 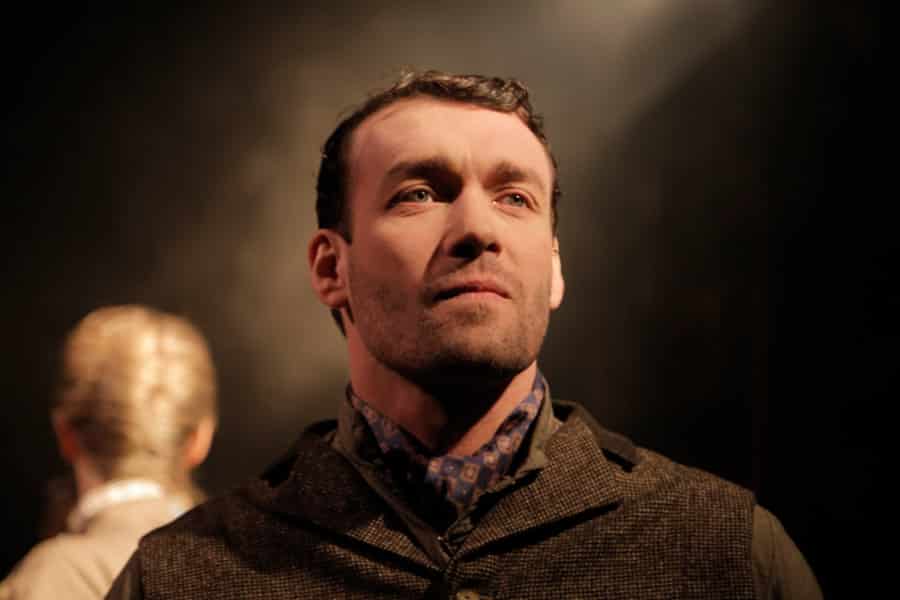 Central to this achievement is the astonishing performance in the lead role of Trudi Camilleri.  Seen here not so long ago as Mother in ‘Ragtime’, she was impressively capable standing in at short notice for the indisposed Anita Louise Combe.  Producer Blake Klein approached her and asked her to do a big project with him, and then went off and searched for the right show.  In due course, with the agreeement of LaChiusa, he came up with this: but this part is a challenge of an altogether much, much greater magnitude.  Hardly ever off-stage, Anna is the person through whom and in whom we see and experience the entirety of the drama.  Luckily, Camilleri has had the practice of singing big operatic roles (Butterfly, Mimi, Sieglinde) and has years of experience doing it at that.  She is far and away the most senior member of the cast and exudes an authority and focus which rightly dominate: vocally, she is perfectly adept at switching between dramatic heaviness and lighter-than-air pianissimi, her diction is razor-sharp and her phrasing easy and natural.  The only problem she has – and it is not one of her making – is that the show takes about 15 minutes to really get going.  Coming right at the start, this seems more of a problem than it really is.  LaChiusa’s only flaw in construction.  What follows more than makes up for it. 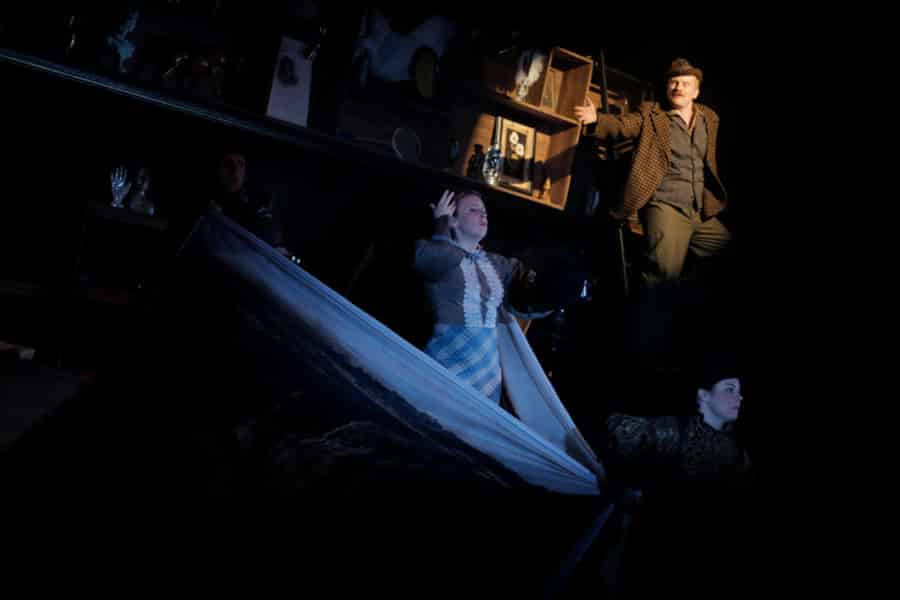 The rest of the company make a fine ‘chorus’ commenting on Taylor’s stagnation as downtrodden, ignored and over-looked schoolteacher, trainer, therapist, in small-town America that just doesn’t grasp what unfulfilled, unexpressed ‘greatness’ she has in her; and then, they are heard commenting upon her remarkable ascendancy as the instigator and scientific planner of one of the most daring of dare-devil ‘stunts’ that amazed a sensation-hungry public at the turn of the last century; ultimately, they are there to tell us about her subsequent fading again into obscurity, and show us to what happened to all those who tried to imitate and surpass her achievement.  However, it is in their more personal capacities, as incarnations of real people in her life that they are most to be remembered.

Will Arundell has a well-written journey to go on himself as her ‘agent’, Frank Russell, finding surprising notes to strike in his part, especially in the second half.  Also sometimes to be heard in the stand-by function for Anna, Emily Juler is usually playing her sister, Jane, and also another completely contrasted character, the ‘Blonde’; she is a wonderful counterpoint to the assertive bombast and determination of her widowed, desperate sibling.  Every bit as striking is Emma Ralston, who comes of age in this production with a characterisation and performance that place in her the ranks of those who you will be seeing cast again and again in West End roles: her 2nd Act showdown with Taylor, as her staunch opponent, Carrie Nation, is a battle-of-the-titans worthy of Handel and one of the dramatic high-points in this production.  Her minute attention to detail and her icy poise and control are, doubtless, the result of typically sensitive and intelligent direction from O’Hanlon, who has worked with all the cast with such precise concentration and finesse.  Tom Blackmore is another such beneficiary of this artistry: he grows visibly stronger and more fascinating as the performance develops, with his Young Soldier being a characterisation of telling economy and modesty.  Finally, Conor McFarlane’s warmly voiced baritone pairs well with the even darker, sexily lusher bass of Andrew Carter.  At the performance I attended, I also got to see Matthew Gent brought on to substitute for a suddenly unwell Carter: his wiry, angular intensity meshed equally well with the rest of the ensemble.  Natalie Williams is the other standby. 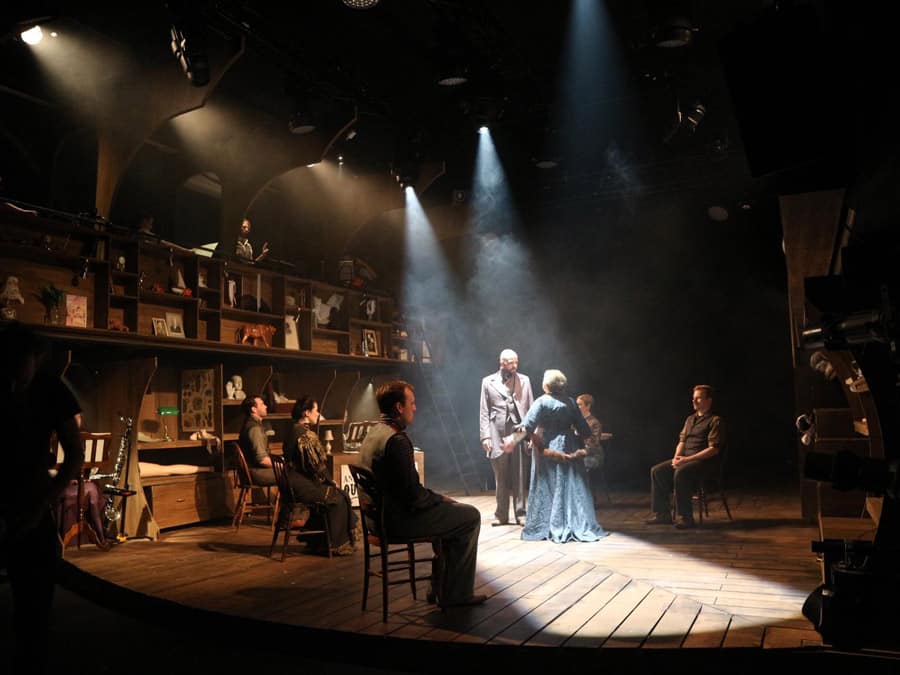 All of this takes places on the open, traverse stage of this theatre, which is such a perfect setting for any modest chamber musical theatre.  The sides are dressed – over-dressed – with decorative paraphernalia assembled by Tara Usher.  The richness of the writing in the text, however, as well as her impressively handsome concept for the costuming (realised and finished with apt flair by Lemington Ridley – Karolina Pociute attends brilliantly to everyone’s hair and make-up), make much of this clutter seem rather redundant and in-the-way.  Not so with the pitch-perfect lighting design of Beth Gupwell, which commands epic grandeur with bold expressionistic effects and a near mystical assimilation of the ebb and flow of the contours of the musical score. Overall, however, as a combined creation, this is a production that all concerned may justifiably feel immensely proud of.  It is a ravishing spectacle, in miniature, well deserving of a bigger production and a superb recording you will love to play again and again to relish for all its lovely tunes, dramatic energy and ingenious story-telling.  It is a great testament to the strengths and gifts of Michael John LaChiusa, and please may we see and hear a lot more of him?  Decades from now, I anticipate, we will all be wondering why his work was not more often performaned and seen.  For the rest of this month, you have an opportunity to do something about it, so grab your chance with both hands.  Just like Anna!