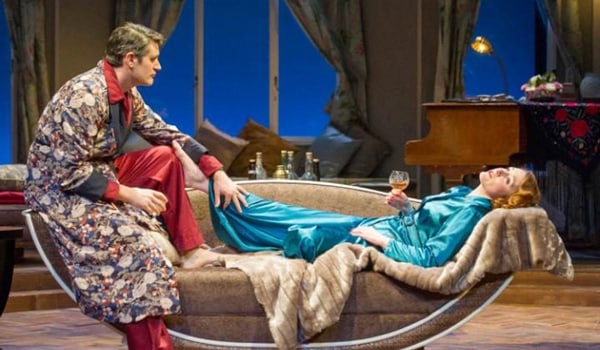 Shakespeare once wrote that the course of true love never did run smooth and he certainly wouldn’t be wrong if he were to cast a cursory glance at Private Lives, currently at the Churchill Theatre, Bromley.

We begin on adjourning balconies of a luxurious hotel where a divorced couple, who – unaware of each other’s presence – are honeymooning with their new spouses, Sybil and Victor. While initially aghast, the pair rekindle with an almost reckless abandon and abscond to Amanda’s Parisian flat.

With the main scenes taking place on the hotel balcony and only one scene change, the play isn’t heavily reliant on set design. There is, however, a nod to the flamboyant 1930s Art Deco period throughout, particularly in Amanda’s flat.

One of Noel Coward’s most enduring comedies to date, the lead roles of Amanda and Elyot have been depicted by some of the most esteemed actors, including Maggie Smith and Alan Rickman. While grappling lightly with the themes of duty, obligation and free will, it is the spirited yet alluring Amanda, played here by Laura Rogers, who captivates in her portrayal of the somewhat wanton female lead, whose dancing in is an endless source of amusement. 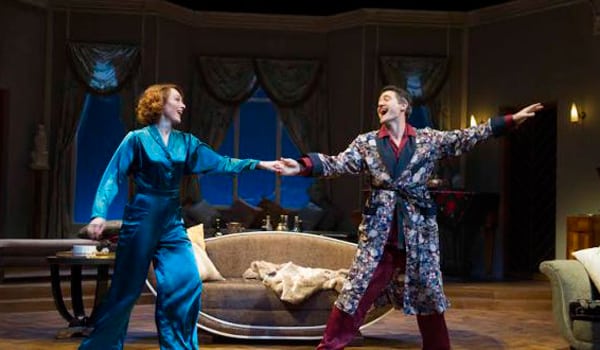 But it isn’t quite harmony for the pair who, intrigued about potential lovers during their five years of separation, descend into acerbic jibes and razor-sharp one-liners. The result is a sexually suggestive fight between her and Elyot that has the audience gripped, albeit reminding them of the all-too familiar fraught boundaries between love and hate. Tom Chambers’ Elyot at times delivers witty one-liners with panache but occasionally rushed lines in the second half sometimes fall flat.

The sudden arrival of the dreary Victor (played by Richard Teverson) and the prudish Sybil (played by Charlotte Ritchie) deftly balance the quarrelling lovers, interrupted only by the French maid Louise, played by Victoria Rigby, who discovers the fracas the morning after.

The leads do have a small singing scene and the score contains one of Coward’s most popular songs, Some Day I’ll Find You, but more music would be welcome, as would a little more theatrical adventure and playfulness.

However, while the pace of the comedy occasionally dips in the second half, this production of Coward’s play is a gem, proving the enduring relevance of Private Lives and its ability to delight contemporary audiences.

Sorry Sybil and Victor, but who wants a straight-laced love affair anyway?

BOOK TICKETS FOR THE UK TOUR OF PRIVATE LIVES

Layla is a London-based writer and freelance journalist. Her words have appeared in VICE, The Telegraph and The Independent among others. Formerly Culture Editor at Kettle Magazine, Layla is continually captivated by London’s vibrant theatre scene. Her biggest acting acclaim was playing the moon in a school play.