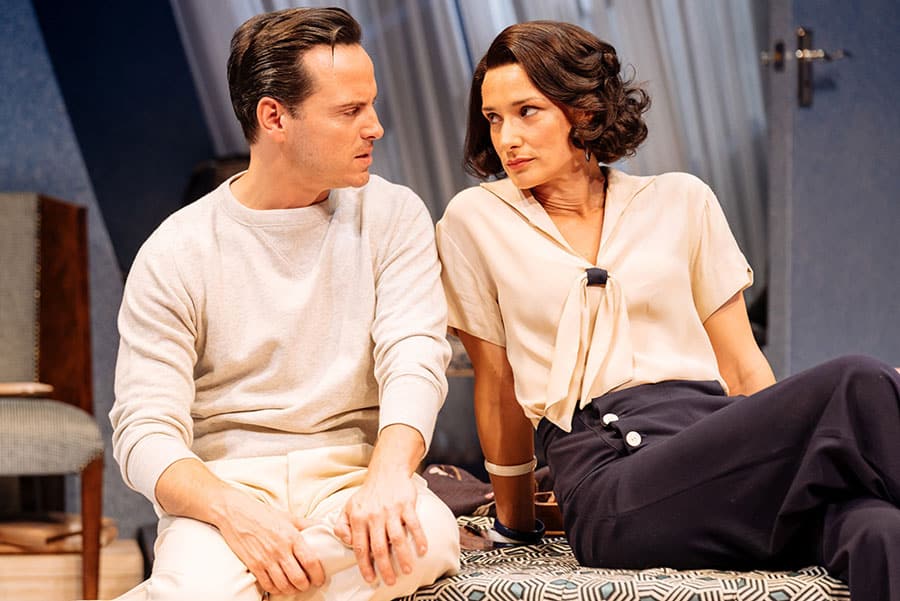 A few years ago, the National Theatre, in its mission to be representative of and faithful to the canon of great British dramatists, wheeled out this little performed and not well-known middle-period Noel Coward comedy, giving it a representative and faithful staging; a gaggle of company regulars dutifully filled all the stipulated roles, and then did their best to navigate a Lyttleton stage crammed to the gunwales with cumbersome furniture, ephemera, props and bric-a-brac, littering a box set vertiginously configured to diminish and narrow and vanish in a point somewhere in the upstage centre region, creating a feeling of the suffocating oppressiveness of the bohemian life.  And they tried, somehow, to draw from this crowded mess a light comedy of manners, while the despairing lead droned on and on in a role that seemingly had nowhere to go.  So, when it was announced that the Old Vic was reviving this creaking period piece, in my mind alarm bells were not so much ringing as playing the Coronation Scene from Mussorgsky’s ‘Boris Godunov’.

How little I knew.  What a magical transformation has been achieved by director Matthew Warchus at his Old Vic – incredibly, attempting his very first Coward play.  Andrew Scott returns to take on this demanding central role of the actor who can never stop ‘acting’.  I last saw Scott in a Coward comedy at this same address a few years ago, when he played one of the three bohemian lovers in ‘Design for Living’.  Then, director Anthony Page allowed Scott free rein to show off his high-octane, scene-stealing skills. Here, nearly a decade on, with much more experience under his belt, including a well-received (and understated) Hamlet, and also a great deal of precise focus television, Scott is richly matured.  He makes very much less go an awful lot further; not a bad idea, when playing a part that dominates most of the three acts that put the lead actor at huge risk of running out of ideas to keep the public amused. 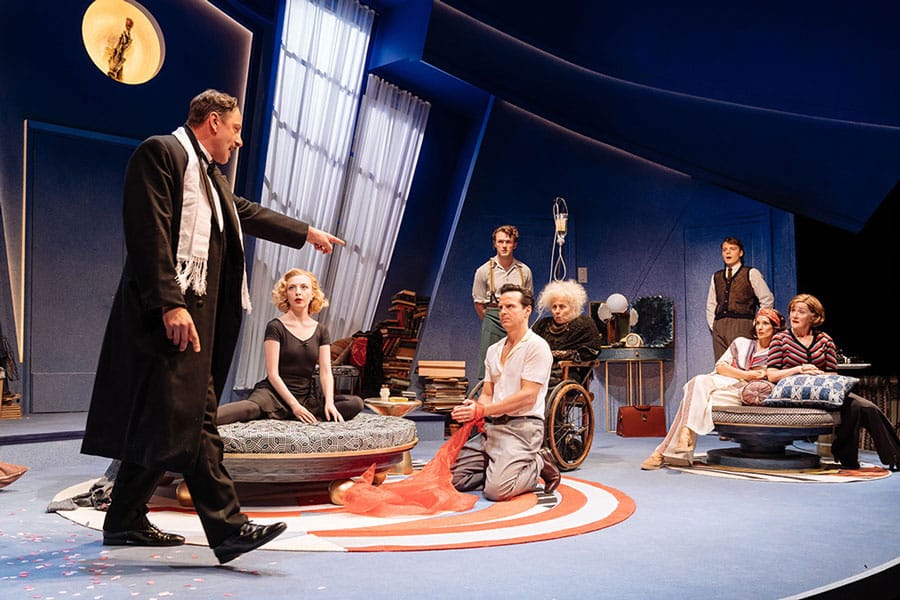 But no such danger arises with Scott.  Here he is superbly, masterfully in control of himself, and indeed of all – or nearly all – that happens around him.  That is exactly as it should be: the part is a virtuoso showpiece for a consummately gifted actor.  It is a major source of the pleasure of this production that we see and hear the astonishing dramatic skills of such a clever and subtle professional.  Especially satisfying, too, for the audience, to see a player who has in real life also achieved something like the stature that Coward’s Garry Essendine is always telling us he has.  Indeed, for the concluding bow, a heavy security guard significantly appeared at the foot of the stage, with his eyes carefully trained on the audience, doubtless trying to spot the first sign of an over-excited fan making their way to present their congratulations to the star a little bit too much in person.

How dramatic!  Nevertheless, the cult of the Scott personality alone would not count for nearly so much were it not wonderfully surrounded by a company of comparable merit.  Written in 1943, this is Coward at his very best, with expert control of the comings and goings of the Essendine household, staff and visitors, who pop in and out of the five doors on stage with meticulously executed farcical timing.  Indira Varma, as Liz Essendine, is a great foil to her estranged husband, undeterred by the gauche enthusiasm of Kitty Archer’s Daphne Stillington, her philandering spouse’s latest conquest; Archer makes the most of this riff on Nina from Chekov’s, ‘The Seagull’, whose appalling acting is one of the comic high-points of that master’s oeuvre.  Fascinatingly, Warchus contrives an even more stimulating complication in the next two moths eager to cast themselves upon the flame of Essendine’s glamour: Luke Thallon’s impulsive and all-too-believable young writer, Roland Maule, busy lying his way into the great thespian’s inner sanctum; and, an even more inspired manipulation of casting, the creation of ‘Joe’ Lyppiatt, who in the hands of Enzo Clienti, becomes a kind of Ricky Martin figure – equally fascinating and frightening: he ultimately gets to share the Act 2 closing striptease with the clearly highly democratic and inclusive Essendine. 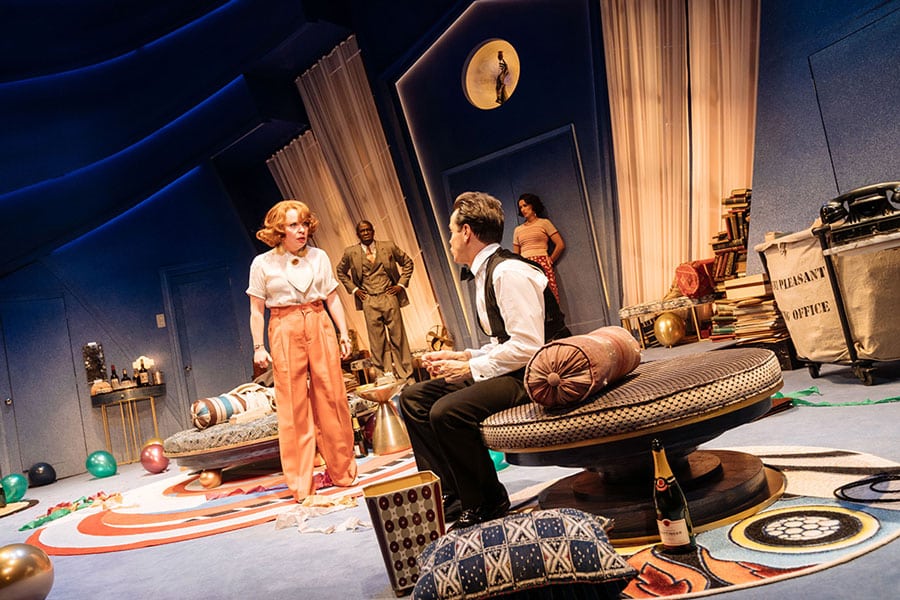 There is also the angry Morris Dixon, played with buoyant energy by Abdul Salis, and his outraged wronged wife, Helen, done to a ‘t’ by Suzie Toase, as well as the long-unsuffering secretary, Sophie Thompson’s Miss Jean Brodie-like Monica Reed.  And there is Fred, the (probably) entirely heterosexual manservant, given knowingly suave body by Joshua Hill (although there are enough clues left lying around here and there, not least in Garry’s sly passing of money to him … on more than one occasion!… which seems to point at – perhaps – a little more than meets the eye).  For that, as ever, is the way with these characters in Cowardland: they are never what they seem, and they are certainly never what they claim to be.  The fun is had in finding out just how far, and how completely, they diverge from appearances and reputation.  In fact, even the maid, Miss Erikson, Liza Sadovy’s first creation of the evening, is every bit as full of surprises as the rest of them (Sadovy has even more fun with the brief appearance of Lady Saltburn, the terrifying great-aunt of Miss Stillington… yes, it all ties together neatly!).

And all this plays out on Rob Howell’s smashing art deco set – he has also done the impeccably judged costumes, and these are all lit to perfection by the great Tim Lutkin with Hugh Vanstone.  Simon Baker looks after the sound (which reminds us, over and over again, of the potency of cheap music – rather like one of those dreary ‘playlists’ of cliched tunes that have now become de rigeur at popular weddings).

Ultimately, though, all of this artifice would fall down were it not for its capacity to seduce and charm the audience.  This it does with total success, sweeping all resistance before it as it fills us with a vision of life so incredibly far removed from how we actually live, but so full of the truth of our passion for pretence and self-delusion, as well as our helpless weakness when provoked by our desires.  For a very first go at a play which has so often caused others problems, this is one of the highlights of the year.