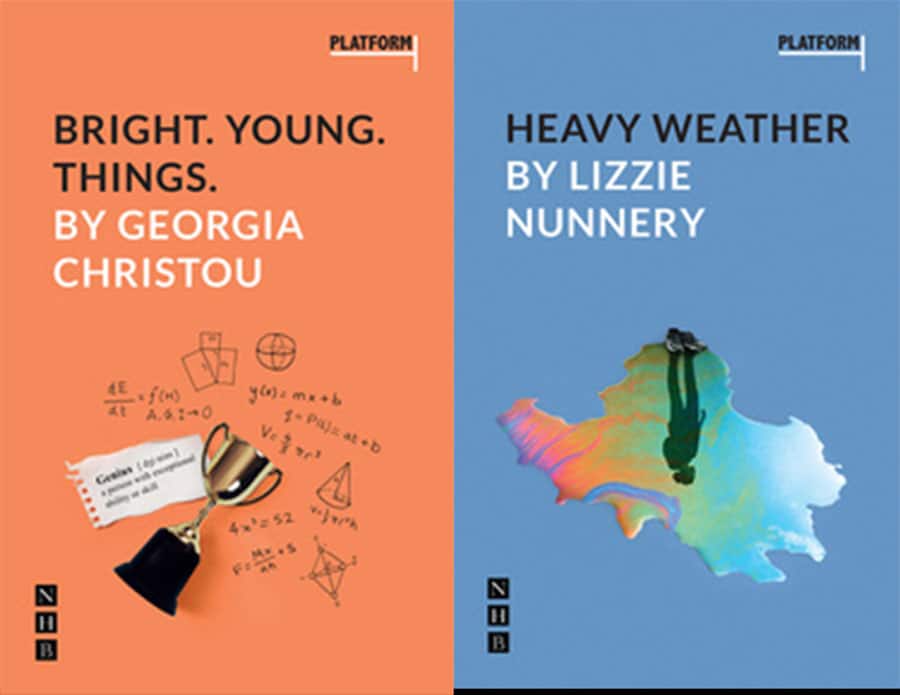 Launched in 2015, the Platform series provides large cast plays with an all-female, or predominantly female cast, to be performed by schools, community groups and youth theatres. It’s a collaboration between Nick Hern Books and Tonic Theatre, whose director, Lucy Kerbel, responded to research that showed that, although most members of youth theatre groups were female, many plays side-lined female characters for male led narratives. The aspiration of Tonic is to support theatre in the UK to achieve greater gender equality. These plays set out to challenge assumptions of female voices and experience by placing young women centre stage, without denying opportunity to the male participants in the group. These two new plays, following on from the first three Platform plays, are contemporary, relevant to the lives of young people, and offer an excellent range to a group who like to be challenged.

Bright. Young. Things by Georgia Christou uses a structure many young people will identify with- the reality TV competition. Here the “hunt” is on to find the “Golden Brain” of Britain, the cleverest bright young thing. It’s a piece that I think many young people will enjoy being in, and there is much humour. I loved the Producers, who can be any number provided they all move in the same way, a homogenous group of slimy manipulators as they script their show. Instantly recognisable are the cheesy presenters and judges, and the contestants, who are well-rounded characters. Accidently recruited into the final is Rochelle, spirited and intelligent, who refuses to fit the mould the producers decide for her, and, one by one, the other contestants realise that this isn’t what they want either. It’s a clever piece about identity, parental pressure and the media, and it reads with tremendous energy.

Slightly darker in tone, but bringing us back to pre-COVID concerns, Heavy Weather by Lizzie Nunnery reminds us that the climate emergency is still of chief concern. Mona, an outsider, has been brought up by her eldest sister, Elin since their mother walked out on them to campaign and protest for environmental issues. Catching a glimpse of her mother on a screen, Mona travels to a climate change protest to find, confront and join her mother, Lucinda. But she finds chaos, her mother is selfish, and the issues are more complex than she thought. If all this sounds heavy- and it is a strong message- Nunnery weaves through the text hilarious, thoughtful encounters with a social media Influencer, a Guru, over-sensitive volunteers, and, with echoes of Bright Young Things, a storyteller who insists on shaping Mona’s narrative into one of anger and protest. The play also contains music, superb lyrics that enforce the play’s message, and thrums with life and urgency.

Both writers give ample opportunity to the groups to make their own mark on the production, the scripts give much opportunity to the performers. It also strikes me that, with social distancing rules in place, there are enough parts for smaller groups to work on the text, not just one large group, perhaps creating two contrasting versions of the same text. Every youth theatre director, drama teacher and community group would do well to check out these plays, and others in the Platform series. As Kerbel states, youth theatre is the engine room of future theatre-makers, and here is excellent fuel to power that development.