Douglas Mayo reviews a new production of Pippin the musical that is now playing at Southwark Playhouse having transferred from The Hope Mill Theatre.

It must be said that Stephen Schwartz really is one of the finest musical theatre composers and lyricists there is. Visiting Jonathan O’Boyle’s new production tonight at Southwark Playhouse, I was reminded just how much I enjoy this score, his second major musical, the first being Godspell.

Having braved the cold and snow, I thoroughly enjoyed this most wondrous score and this production of Pippin which is yet another transfer from The Hope Mill Theatre in Manchester, which is fast becoming one of our most treasured musical theatre producing houses.

Maeve Black’s scenic design gives the Large at Southwark Playhouse a very end of the pier feel, a bit decrepit, definitely worn, inhabited by the Leading Player and her troupe of players returning to tell the story of Pippin. It’s a story they’ve told many times before and the dominating Leading Player ensures it must be told just so, and that’s where the fun begins.

Genevieve Nicole’s Leading Player is near on perfect. Vocally dynamic and perpetually poised to steal back the spotlight from any player who dares to stray from the path. It’s only recently in the production’s history that this role has been played by a woman, yet based on Nicole’s performance tonight you might always think it had been so if you had never seen the show before.  The dynamic works perfectly when contrasted with Jonathan Carlton’s stunning Pippin. Incredibly well sung and imbued with perfect comic timing, Carlton is definitely a star in the ascendance. Watching Nicole and Carlton together is a thrill.

Mairi Barclay plays both Fastrada and Berthe, an incredible piece of casting and an incredible performance. As Berthe – Pfiffin’s grandmother (and no that’s not a typo!) her wonderful showstopping delivery of Just No Time At All was a highlight. As Fastrada, the manipulative, step-mother of Pippin and mother of Lewis she is equally at home wringing every inch of comedy out of Roger O Hirson’s book. Bradley Judge injects humour in abundance into Lewis, Fastrada’s vain, vacuous and Visigoth slaughtering son. It’s a character whose largess is only matched by his indifference to the fawning of those around him. Watching both mother and Pippin’s sexual doting over Lewis’s new military breastplate complete with pecs and a eight pack… well see it for yourself!

An important part of Pippin’s story is his relationship to Charles (Charlemagne) played by Rhidian Marc. Marc brings a glorious voice and booming Welshness to this role and his family interactions help establish the comedy of the piece from the outset.

Tessa Kadler plays Catherine, a simple mother and widow and foe of the Leading Player. Together with her son Theo (Scott Hayward) they provide some of the comic highlights of the second act.

William Whelton as choreographer has kept elements of Fosse’s original choreography in the mix. It’s not delivered with the laser-sharp precision of the original but that’s not a bad thing as the rest of his vision sees the cast switching between styles even paying homage to two British ice dancing champions at one stage. Its choreography that is incredibly fluid and executed with panache by this talented company.

O’Boyle’s production is tight, fast paced and thoroughly enjoyable. This is no slavish copy but a wonderfully fresh take on a musical theatre classic. The direction here works well, the production flawlessly moves from scene to scene and is about as cohesive as you could possibly ask for. 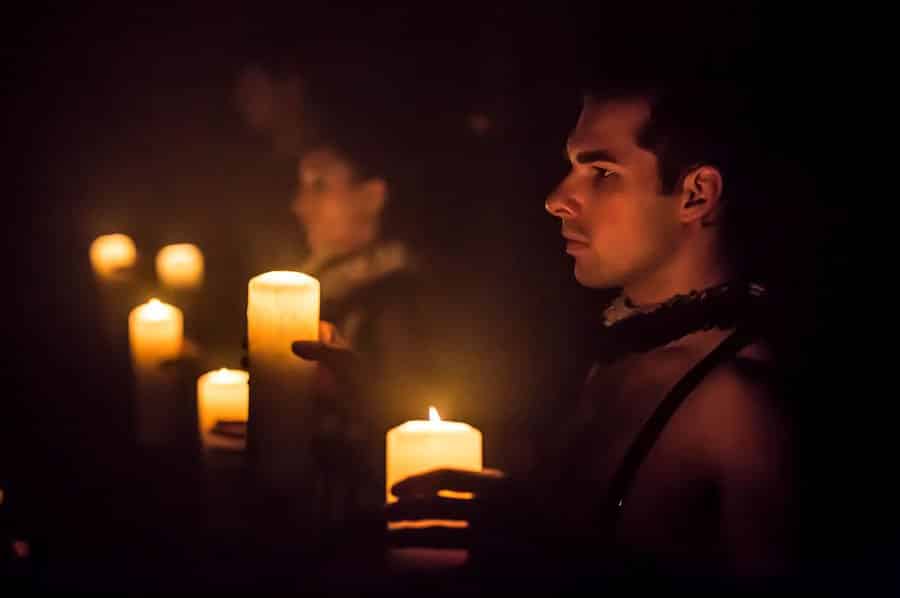 Zach Flis and his band keep the action flowing beautifully, delivering Andy Collyer’s orchestrations as a base upon which this talented ensemble deliver Schwartz’s glorious score. Katy Lipson, Joseph Houston, William Whelton and Guy James are to be congratulated on yet another brilliant production.

There is so much to enjoy here that one viewing of Pippin may not be enough. I’m certainly looking forward to a second viewing.