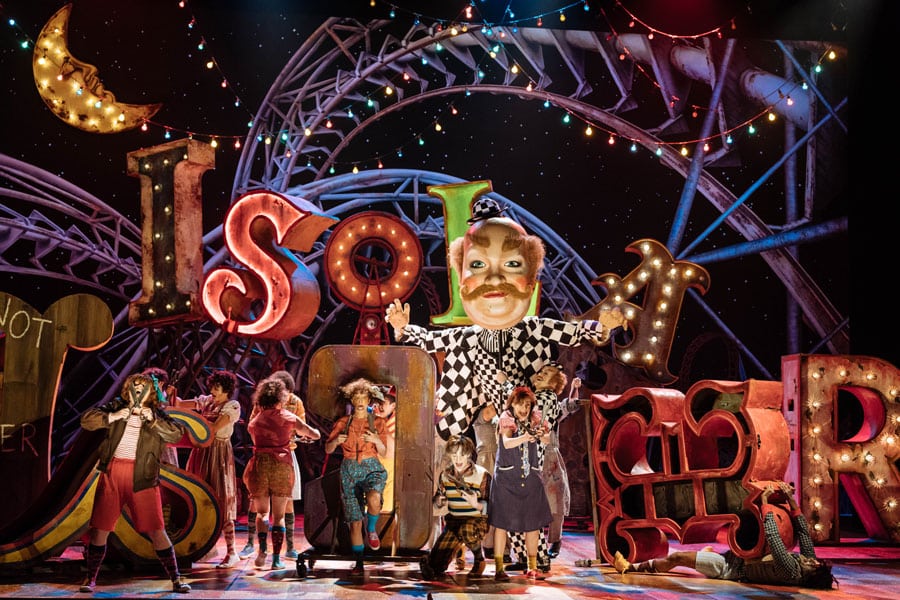 The National deserves our admiration and encouragement for searching so tirelessly, every Christmas season, for a new way to entertain us above and beyond the conventional diet of pantos, ballets and the relentlessly onward march of the Dickens Industry.  Amongst the delights served up here over the past few years have been some real discoveries, marvels like ‘Nation’ and ‘Peter Pan’.  True, there have also been the occasional noble experiments that have not resulted in quite such 100% outcomes (as Ofsted might say), and it remains to be seen whether this current offer ends up being classed as being of the first or second category. 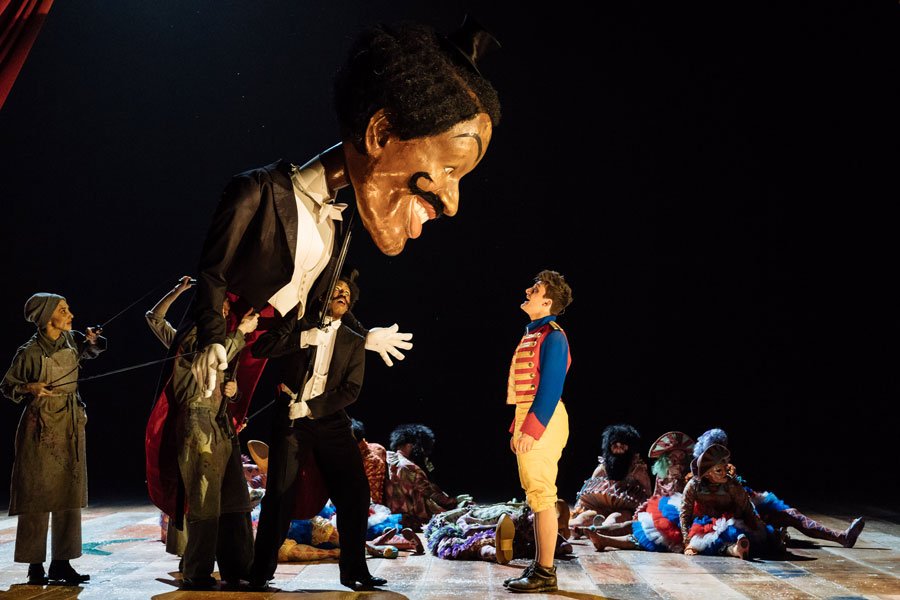 What we saw on Press Night last night would seem to suggest the latter.  However, let us begin with the positives.  There is a foray into a handsome stage design, by Bob Crowley; however, even he seems to have run out of budget, with a little looking as if it is being asked to stretch a long way, and much use is made of a clutch of stepladders (recalling productions by certain other directors).  More of this in a moment.  The lighting, by Paule Constable, is intellectual rather than showy: at the start, for instance, we might well be in Ibsen territory, and at his bleakest.  The director, John Tiffany, will always be remembered for his terrific realisation of superb productions, like ‘Once’ and ‘Harry Potter And The Cursed Child’.  Here he seems on less certain ground, and the principal cause of that may well lie in the script. 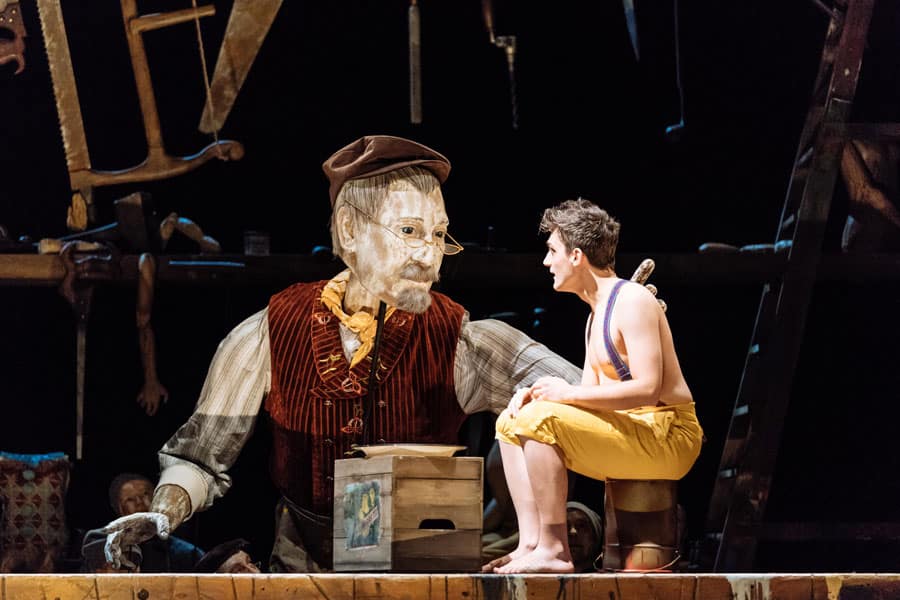 Dennis Kelly is officially designated at the ‘playwright’ of this work, but that is only part of the story.  He has the interesting brief – and it is a challenging one – to make use of the original musical score written for the late 1930’s Disney animation.  The musical adapter, supervisor and orchestrator, Martin Lowe, has added considerably to what is available, also plundering from a selection of hitherto unpublished material and drawing generously upon more or less regional Italian and Alpine folk song repertoire, to fabricate a complicated sound world that simultaneously inhabits several different worlds.

Music is such a powerful influence over everything  that this provides the production with a nearly insoluble problem: how can it make sense of such a varied patchwork of genres and styles?  Director and designer do what they can, while the ‘movement’ director, Steven Hoggett, tries valiantly to find an appropriate physical language to unify the disparate elements.  Crowley also makes frequent (but patchy) use of puppetry, of various kinds: four of the secondary characters – Geppetto, the puppet maker (a rasping Mark Hadfield); the Blue Fairy (a sweet if rather cool Annette McLaughlin); Stromboli, the puppet theatre owner (Gershwyn Eustache Jnr, serving up a grotesque Uncle Tom of a caricatured stereotype, much more Papa Lazaroo than is tolerable to this touchy reviewer), and the Coachman, who takes the naughty children to Pleasure Island to be indulged and turned into donkeys (David Kirkbride) all get this treatment. 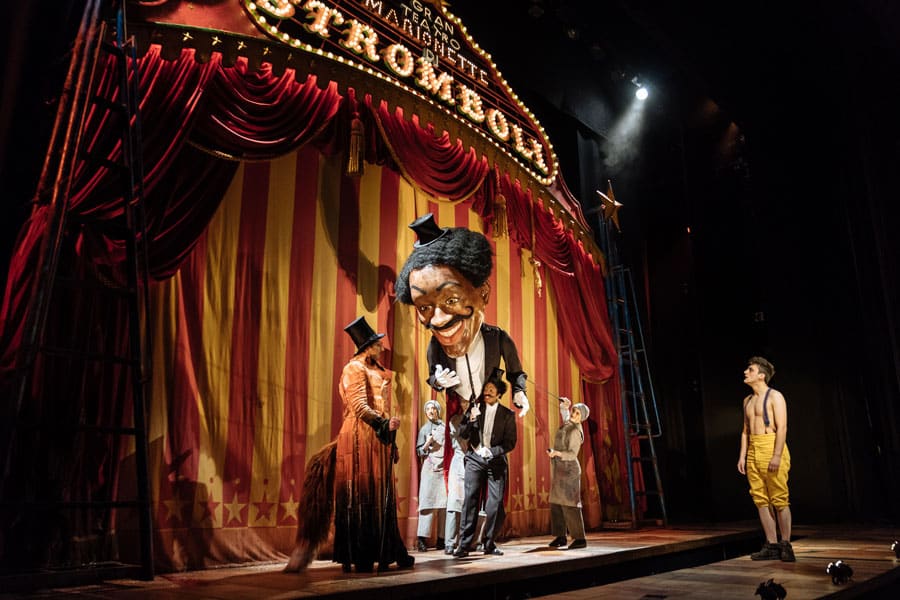 Kirkbride actually puts in a well-facetted and modulated performance, but little of that makes its way through the frozen rictus painted onto the giant head that he is compelled to carry aloft above himself for nearly the whole of his performance, rather like a Christ in the Passion Play at Oberammergau having to go about the whole procedure holding up his crucifix with both hands.  The Karnival-esque toys become an irritating and deadening distraction, even though they may well have consumed the lion’s share of the funds allocated for design.  Oh, and each has to be carted around by its own ‘dedicated team’ of handlers and operators, making the stage resemble one of those Passiontide competitions that enliven the streets of some particularly devout Italian towns – mainly in the far South of the country.  But do they help tell the story? 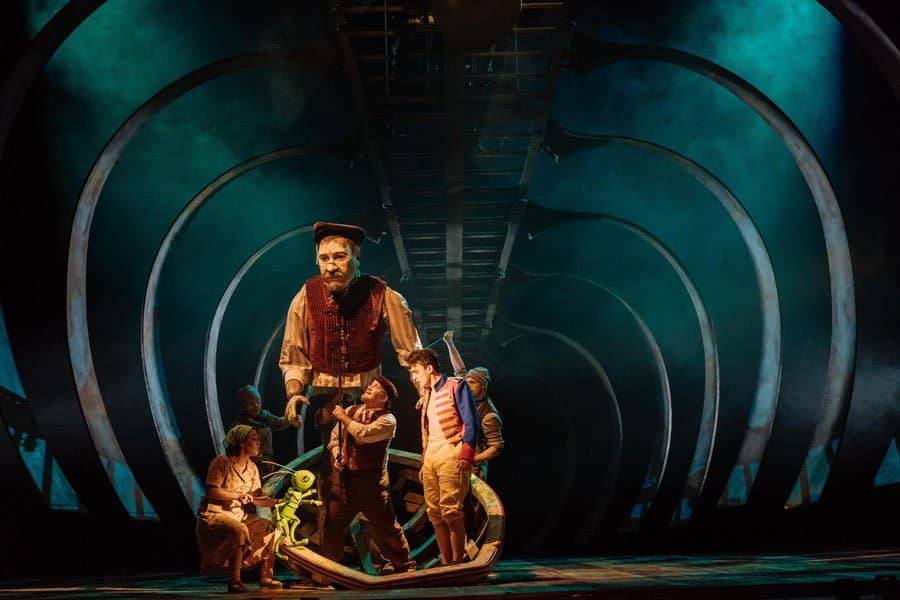 Equally, there are characters who escape this burden.  The sly Fox – in another example of craven perpetuation of a stereotype – is David Langham, who goes about in a big floppy coat, with a non-too-probable fluffy tail poking from time to time from beneath its folds.  Unlike the bulk of the other characters, who talk like their personalities have been through several Hayes Code sieves, he does resemble the ‘alternative comics’ of the late 20th century.  On the other hand, the urbane and dapper Jiminy Cricket, alone of all the characters, sounds as if he is from this millennium (and if you are planning on attending this presentation with children, they are likely to find this character the most appealing).  He is made into a cat-sized pet, hauled about the place by two yokel-clad ensembleers, one of whom, Audrey Brisson, must voice him from beneath a traditional peasant headscarf.  Why?

Who on earth knows.  Least in the clue about this must be the regular-sized ‘human’ cast, with a female Lampy (Lampwick) being Dawn Sievewright, asked to re-tread her tough Caledonian lassie turn from a certain other recent musical entertainment (having said that, when someone makes the musical of ‘Million Dollar Babe’ – and if that has not already happened, then it is only a matter of time – she is going to get the lead: her right hook has to be seen to be believed).  The equally one-dimensional Waxy is Jack North, and the rest of the gang are packed out with Trieve Blackwood-Cambridge, Anabel Kutay, Clemmie Sveaas and the superb Jack Wolfe (wasted in inconsequentiality).  My guess is, and it is only a guess, Tiffany had so many headaches trying to solve the technical nightmares of the production that he simply ran out of time to detail the rest of the production in the way it really, really needs. 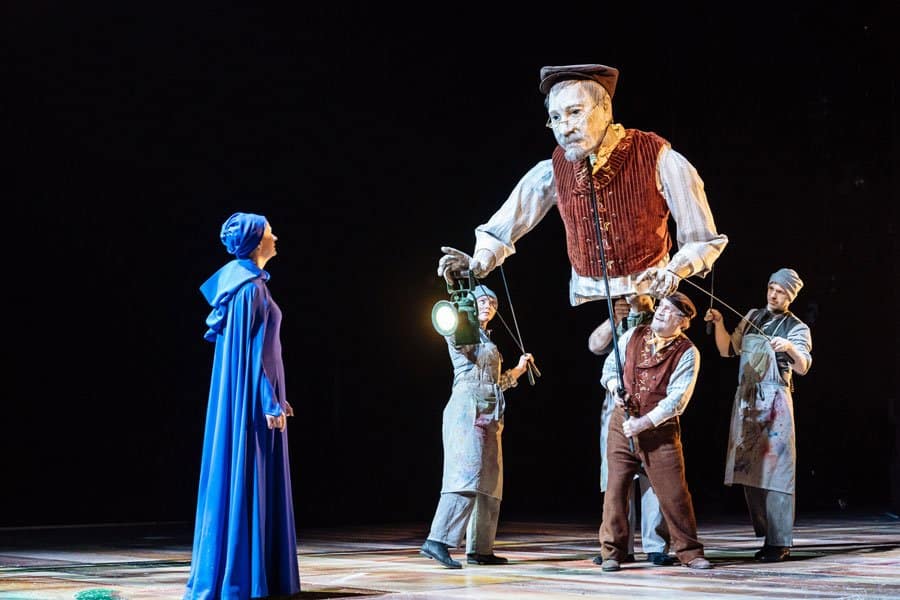 The same also has to be said for the choreography.  Despite having a score dominated by some of the best known Disney tunes ever written – and getting hold of them is something of a grand coup for this house, Hoggett seems totally at a loss as to what to do with his cast when they are playing.  A good example of his is the ‘new’ number of ‘Fun and Fancy Free’, a thumping quick-step, which is staged several miles away from that easily identifiable dance form: for theatregoers who have had their cultural wings nailed to the floor and been force-fed ‘Strictly’ for Lord knows how many years, this is a bit of a radical move.  I imagine, for many, the temptation to tweet about this heresy to Len may prove too strong to resist.

As for the sound…  Well, the designer Simon Baker is a very good master of his trade.  It cannot be anything other than a confluence of misfortunes that have created the end effect of his amplifcations sounding for all the world as if they are emanating from a cupboard located in a building nearby, rather than the stage directly in front of us.  Oh, yes, and what about that odd slit in the forestage?  It took me – and I do go to the theatre fairly often – well into the second half to work out that it serves as a pit, in which have been poured the talents of no fewer than fifteen excellent musicians.  Now, the Lyttleton is not the Royal Festival Hall, a space that can be easily filled by precisely that number of musicians and without the assistance of amplification.  So, why is it needed here?  This is a conventional chamber orchestra: single woodwind, brass, percussion and strings, with a keyboard thrown in.  Are the acoustics in this space so atrocious that they need boosting with mikes?   Maybe they are.  Tom Brady does a good job with the interestingly compiled score, with its yo-yo’ing between unrelated styles.  It would be nice to hear his work properly, though.  And more involving.  The box-like, flat sound projection available here, sadly, often as not squashes his carefully nuanced details into a muddy mess. 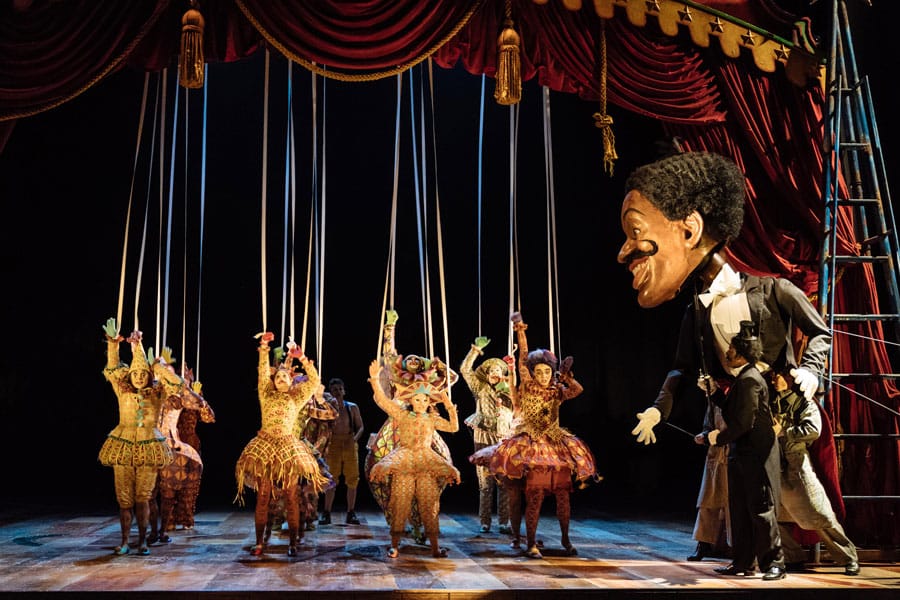 The element I have paid least attention to so far is the biggest cipher of all: the lead.  Joe Idris-Roberts is a very accomplished actor (I saw him recently at The Bunker, and most impressive he was, too).  He certainly does have a fine physique, which – Aladdin-like – he gets to display to advantage for quite a bit of the first half.  He has a pleasant voice, but – like most of the company here – he does not seem to have been cast for his ability to sing 1930’s American popular songbook rep particularly well.  On the basis of what we see here, he can ‘move’, but he is not really asked to ‘dance’, even though, as I’ve observed above, the music sounds as if it is constantly trying to get the characters to do just that.  His moves, like those around him, are rather more athletic than expressive or interpretative.  All of this aside, there seems to be a much bigger, and harder to solve, problem to struggle with here.

If you ask anyone, just anyone, to ‘draw’ an image of what Disney ‘means’, to them and to the world, they would most likely ignore everything I have discussed so far.  They would, however, be able to make an attempt at drawing one thing, or to cry disappointment at feeling ill-equipped to sketch it: a face.  It might be the face of Mickey, or Donald, or Goofy, or one of the other well- known figures of the franchise.  And the most important element in the face would be the eyes.  Disney, having shown the world the china doll perfection of Snow White in his first feature-length cartoon, realised he could not repeat that trick: he needed characters for audiences to warm to in the merciless close-ups of the exhibition houses.  And so he endowed his vision of the piece of wood made toy made flesh with the most expressive eyes he could find: Vivien Leigh’s.  Go and watch the movie again, and you will see her eyebrows all over the place.  And it is with that very expressivity that we, as audiences, connect.  Who cares about spectacle?  Only technicians.  Give us the human stories of personal desires and passions, vulnerabilities and strengths, virtues and vices, and we will love the heroes who take us on their journeys to explore them.  It is no fault of Idris-Roberts if this property does not – quite – give him the scope and depth he needs to draw us closer into his heart.

So, what lies behind all this?  Honestly, if the National had not had such a runaway artistic and commercial success with ‘War Horse’ (and nobody need be in the least bit surprised to learn that was the erstwhile demesne of many in this company), then I wonder if we would subsequently have seen such a proliferation of other shows making use of similar gadgetry?  Just wondering.

As it is, it ain’t over, till it’s over, and the production team may well make many radical improvements to this venture.  Let us, please, not forget that even the great triumph of the puppeteering branche of the theatre, the story of a horse made out of sticks, very nearly flopped: legend has it, only some sort of magical miracle lifted it from failure and across that invisible but all important boundary that marks the definition of success: so decisive, and so elusive.  Full marks to the National for having a jolly good go with this attempt; it may yet be made to work as well as the show clearly intends to.  But more work it will need before that happens.