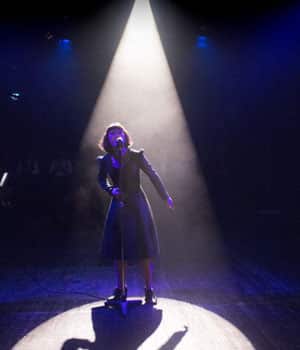 In 1979, Pam Gems wrote a play about the life of Edith Piaf, the French superstar songstress whose life ended tragically in 1963. It was a vehicle for Jane Lapotaire, produced by the RSC, and went on to play the West End and Broadway, garnering a Tony Award for Lapotaire in 1981.

Although the performance was lauded, Gems’ play was not. Writing for the New York Times, Frank Rich was caustic:

“Still, a torrent of rough language alone cannot camouflage the fact that ”Piaf” often obeys the dramatic cliches of rags-to-riches-torags showbiz sagas. Like an old movie biography, Mrs. Gems’s play unfolds in snippets in which minor characters (almost 30 of them) whip by to deliver information (”War has been declared!”) or to act out, in absurd shorthand, famous events in the subject’s life. As written here, Piaf’s various men are often indistinguishable ciphers, whether they be her managers, lovers or one-night stands. If that’s the playwright’s point, she’s fudged the facts to fit. Many of the characters appear to be broad composites; we wait in vain for such lively Piaf proteges as Yves Montand and Charles Aznavour to play their roles in her story.

Instead of raising substantive issues about Piaf, the evening’s cartoonish archetypes call the playwright’s craft into question. If we only meet Piaf’s greatest love, the boxer Marcel Cerdan (Robert Christian), for two inconsequential minutes, how are we to care when the heroine mourns over his death repeatedly for the rest of the evening? Why does the playwright create a cameo for Marlene Dietrich (Jean Smart) without bothering to illuminate her relationship with the heroine? These sketchy people just grease the narrative skids and kill too much time. Singly, they may be innocuous, but collectively they become a dead weight around the play’s neck.”

Nothing has changed over the decades. The play is still troubled in form and content and Rich’s criticisms are as pertinent as ever. This is made clear in Jari Laakso’s stylish revival of Piaf now playing at the Bridewell Theatre. Even using the revised script that Jamie Lloyd brought to the Donmar, and with an outstanding lead, a gifted ensemble, superb musical direction, and a sensitive and insightful staging, the fault lines inherent in Gems’ script gape and irritate.

Part of the problem is that Gems does not permit the audience to know enough about Piaf while simultaneously ensuring there is an overburdening of information. Not enough detail about relationships and feelings is conveyed in the narrative, although many facts are. Given that Piaf was an addictive personality, there are many repetitive passages, especially in Act Two. These really need pruning and rewrites could improve the intensity of understanding of Piaf, her life, crises and triumphs.

But, in the end, these are academic considerations. Because in Laakso’s production they are mostly overcome by the sureness of the direction and the outstanding central performance from Cameron Leigh as Piaf.

The Bridewell Theatre provides an excellent, adaptable space and it is surprising that there are not more professional productions, such as this one, staged there. Laakso sets the action mostly on one level, but at one key point uses the upper gallery to significant effect. Chris Randall’s lighting is terrific throughout, the opening scene being particularly striking, and providing a lasting and haunting image which deftly summed up the agony and ecstasy of Piaf’s career. 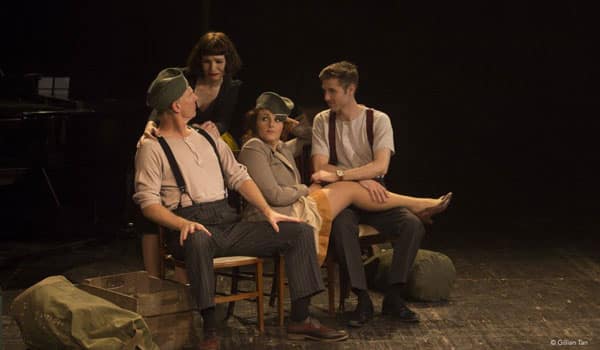 Phillippa Batt provides a clever design; sensibly chosen items of furniture create multiple locations and adapt to many purposes. The play’s tenderest moment, between Piaf and her great love, Marcel (a winning Mal Hall), occurs in bed – Batt uses chairs to create the impression of the bed. It’s not just expedient; it speaks to Piaf’s life and times. She often made something out of nothing throughout her life, and the makeshift aspect of the design helps emphasise this in an ineffable way.

Given its inherent flaws, the play cannot hope to succeed without a powerhouse performance from its star and here Laakso has struck gold. Leigh is outstanding in every respect. Her voice is powerful and bewitching, full of throaty sensuality and ardent guttural flourishes. You have no trouble believing that she could sing loudly enough to be heard over the traffic on the streets of Paris.

Leigh handles all of the numbers with flair, but was truly ravishing in her delivery of several numbers: La Vie En Rose, Mon Dieu and, of course, the signature Piaf tune, Non, Je Ne Regrette Rien. Despite that, she makes an unlikely high point out of Jimmy Brown, a song not in French and not riven with pain; yet, even in this moment of bravura delight, Leigh shows the pain behind the smile, the fear behind the joy.

She is also one of those actors who can manage to invest her character with coarseness and savage, hard edges but maintain empathy. Leigh takes no short cuts here – this is a full-blooded, vicious woman who lives hard, loves and lusts endlessly, but who also happens to have the best voice in the world. It’s fascinating and awful at once. Her use of obscenities is perfectly judged; they don’t jar, they emphasise the type of language and behaviour which has become normal to Piaf because of her life experiences.

Leigh is helped enormously by a spirited and well-judged turn from Samantha Spurgin as Toine, Piaf’s life-long friend. The sense of comradeship between the two women is beautifully conveyed, not the least when they are screaming at each other or laughing raucously with each other, or, in one Instance, sharing the penis of a randy man against a lamppost. Spurgin flirts with hatred and envy of Piaf with clever understanding, but there is always a sound sense of the unyielding support that only decades of intimate friendship can provide. 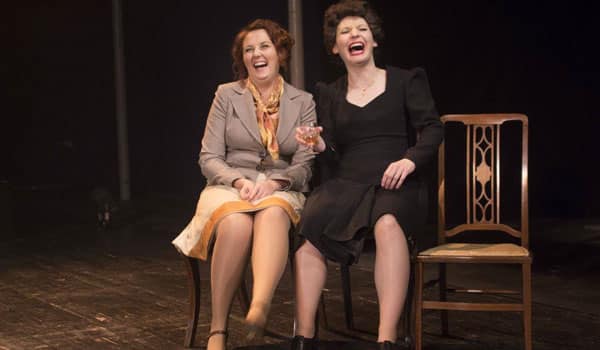 Mal Hall plays most of Piaf’s sexual partners (well, the ones she cared about anyway) and is immensely charming throughout. His hilarious delivery of Deep In The Heart Of Texas is a real highpoint of an evening few on belly laughs. His Marcel is beautifully judged and in a few short scenes he manages to evoke the sense of what Piaf’s life might have been like had Marcel’s life not been cut short. He is good, too, as a young Charles Aznavour.

Max Gallagher plays many roles, all with distinction. He has an easy charm on stage and it is difficult not to warm to him, even when he is required to delve into the more melodramatic aspects of Piaf’s life. His turn as Piaf’s surprise agent is particularly good, as he charts the rise from bicycle-riding hopeful to world-weary success story. There is excellent work too from Maxime Yelle who after a tenuous start as a warm-up act as juggler/acrobat (in retrospect, this uncertain beginning set the mood perfectly for what was to follow) is an active and committed ensemble member, as well as playing Bruno, the impresario who will be so important to Piaf’s success. Both actors brim with commitment and energy, whatever they are doing.

The only disappointment comes in some wooden performances from Kit Smith and Valerie Cutko. Cutko plays Marlene Dietrich, which is a tough gig at the best of times. But this version of her is so aloof and wan as to be almost entirely colourless, when Dietrich’s presence in the play is to provide contrast and inspiration for Piaf. Cutko fares better as the personal assistant Piaf treats badly – she brings quiet sensitivity to the part. Smith, however, jars continually, his poor delivery sadly breaking the efficient unity of the other ensemble members.

There is judicious use of movement (Katya Bourvis) and happily, it never intrudes, only enhances the moment. Particularly impressive is the section where ordinary men turn into soldiers and head to war: simply done, but incredibly effective. Isaac McCullough provides first rate musical support and he is in full command of the difficulties of the songs and ensures they are sung well and accompanied perfectly. It is a joy to hear the piano so well played.

Piaf is an enjoyable, though flawed, play. Laakso’s production wrings every last drop of interest from it, and manages to deliver the material in a fresh and effective way. With Leigh’s powerful performance at its core, this is a very enjoyable theatrical treat.

Piaf runs until 14 November at the Bridewell Theatre