Our very own theatreCat Libby Purves paid a visit to Peggy For You at Hampstead Theatre. 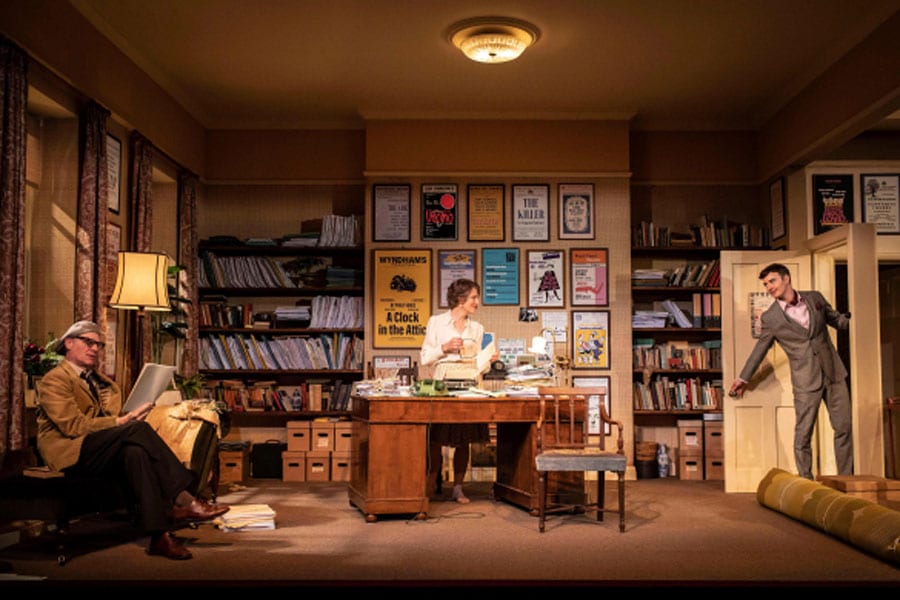 Lounging in the small hours on her office couch, under a wall of posters for her many clients’ shows – both famous and forgotten –  Peggy is fresh back from bailing out a client. Police stations, she finds, are interesting: everyone should go.  A script falls from her hands as she seizes another. “Wonderfully written.  That’s really the problem”.  On her (bare) feet again she is soon batting off those who want her beloved clients to “whore” for Hollywood for not enough money. “You have reached new levels of impertinence even for an American..discuss it with your fellow-pimps”. Assistant Tessa arrives,  to take down a sharp note to  “that ghastly bishop … sent me his play, retyped the title, pretends he has rewritten it’.  There’s been a bit of confusion with the wrong cheques sent to her two Yorkshire Alans, Ayckbourn and Plater.  She assumes they live close, Hull and Scarborough, surely virtually next door…? 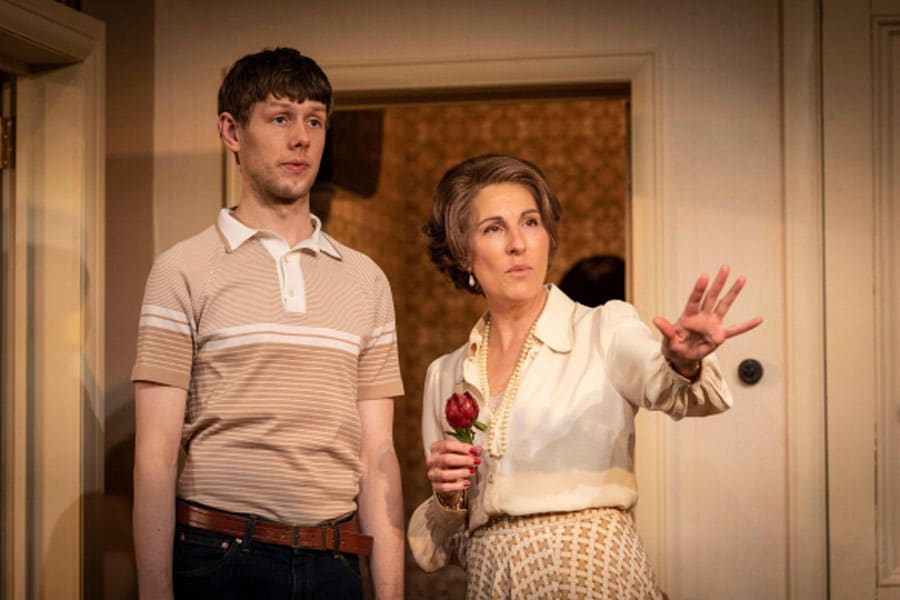 It is Hull-Alan (Plater !) who wrote this 1999 play about Peggy Ramsay, midwife and defender of the 20th century’s best playwrights.  Scarborough-Alan, on first reading it,  said it gave so much about the nuts and bolts it was like inviting the critics in your bedroom.    Well, if you love plays,   this is an invitation not to miss: pile in! Tamsin Greig, elegant as an anaconda and just as ruthless, is in herself a serious treat; and Plater ensures both comedy and important hard-kernel ideas in her interactions with the longsuffering secretary (Danusia Samal) and three playwright clients – imaginary, but based on himself and memory of others.   The first is Simon,  Josh Finan as a gauche 21-year-old with a winning mixture of shyness and the headlong artistic self-confidence that not only sends her his play “Shades of Nothingness” but demands she come and see a scratch pub performance that very night.  She agrees, shrugging off the National Theatre’s new Uncle Vanya, on the grounds she knows the play so well she could virtually sing along.  And,  with a lovely barb, that such events tend to “put fifty thousand pounds worth of scenery between the audience and the play”, and that young directors should be kept away from “concepts”.  Glorious. 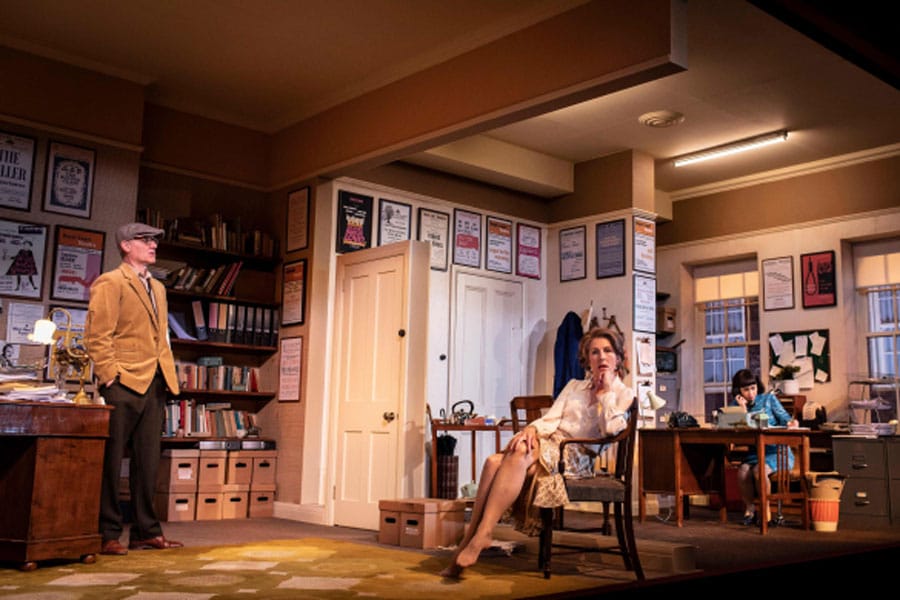 Any play about a real person must be, she once said, a pack of lies; but these lies are memories, appreciations, gamey flavours for which her shade should be grateful to Plater.  Not only for the reminiscences which must be real; Orson Welles eating all the biscuits, Ionesco making passionate love and taking passionate offence, Sam Beckett in Paris “two streets away from my abortionist”. 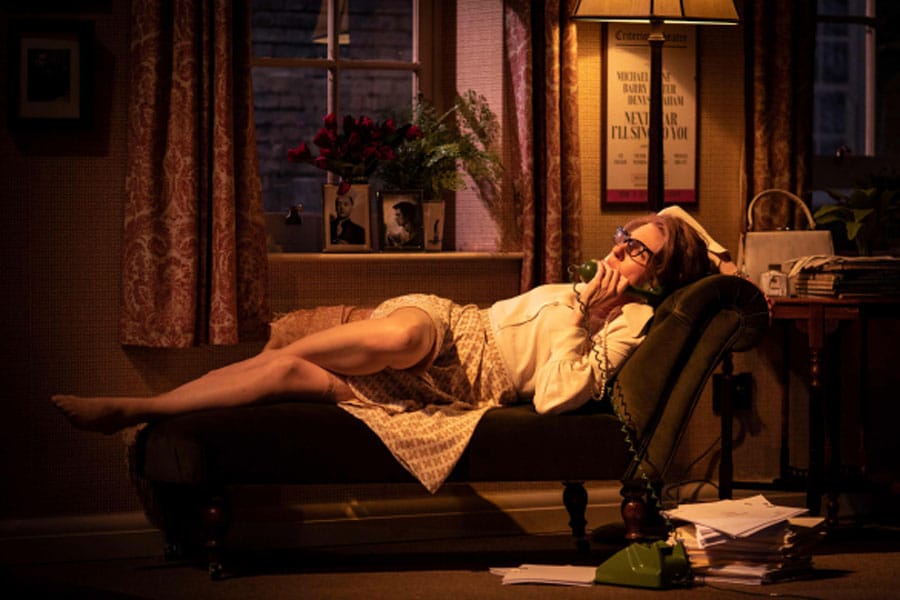 The second playwright is Philip, a smooth Jos Vantyler as a client at the golden-boy stage:  on Broadway and the West End, taking her to lunch, announcing his engagement.  She treats him no better or worse than young Simon. Since the latter has asked the rare and tricky question “What IS a play?” she faces him with it, and gets some artsy clichés – “A celebration of our humanity. A message to the future..” etc.  But the best answer came earlier, as she mused about the Humber bridge:  you set out in the fog not knowing where it leads, then the mists clear and you have arrived somewhere.  That stops the heart; so does an extraordinary moment when she quotes Henry IV part 2  and the rejection of Falstaff “I know thee not, old man”.

That’s artful.  It prefigures the hardcore of the play. For the first half,  I worried it might be just an entertaining tribute band to Peggy and her era, darlings all the way.  But the third client is Trevor Fox hard-bitten, Geordie, fed up with her, giving his notice, refusing to be dazzled by her whimsical distractions. He is the only one to silence her, with a devastating “I wasn’t mad about the real Lucille Ball”  so why a “cheap imitation”?  He is angry at her assumption (clear in her dealings with the engaged Philip) that life has to be lived chaotically if there is to be art. 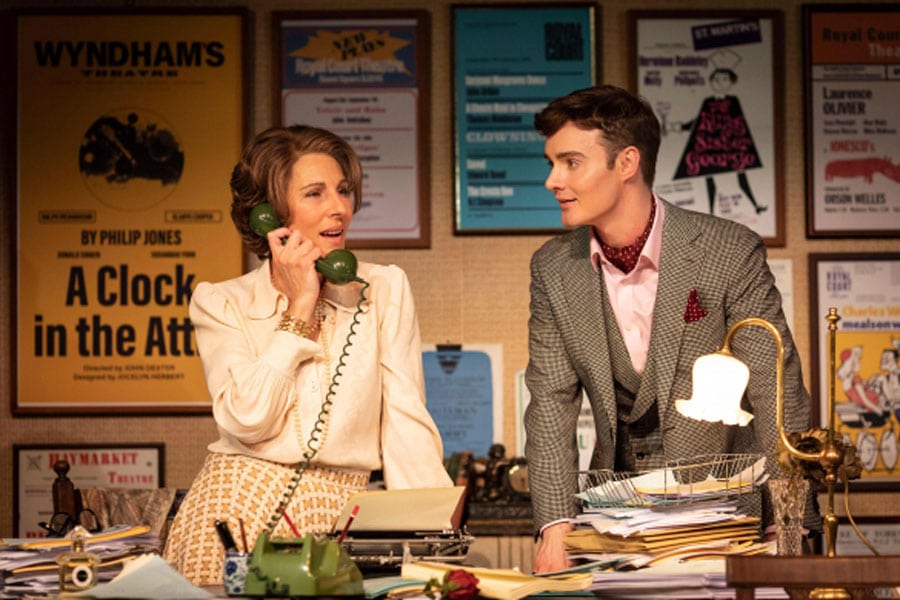 The mist is clearing, we are nearing the revelation at the end of the bridge.  For all the darlings and wit,  we need to see (and love, and forgive for art’s sake) the vital splinter of ice in her heart.  Calls from newspapers tell of another client’s drunken suicide,  and Tessa, genuinely upset,  is told to negotiate fees for obituaries by fellow clients.  Peggy just says the man had stopped writing. She doesn’t care. “I don’t respect writers, I respect their work”.   Asks Henry about the obit and when he rasps “I don’t dance on graves for money” she replies “No point doing it for fun”. 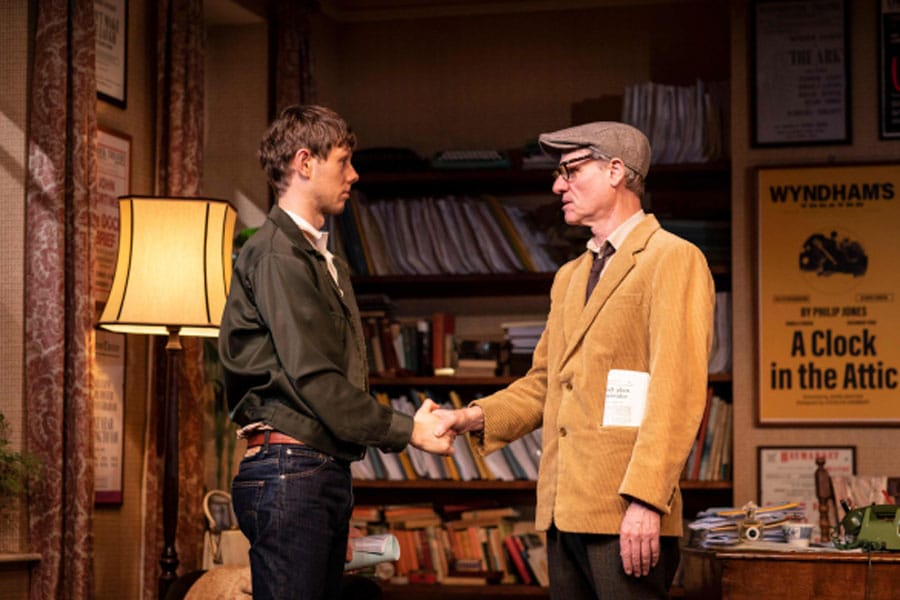 But an apologia saves her for our exasperated, impressed love. Roaming the cluttered shelves of plays she points out that her mind is full, constantly full, of every kind of drama –  new takes on Romeo and Juliet, rites of passage, “two psychiatrists going mad in adjacent rooms, Casanova Meets The Government Inspector, set in Woking..”.

Oh yes. Think I’ve seen most of them.  All honour to those who write plays and fund them, but to those who find, encourage, defend and sell them a special tribute is also owed.  This, I think, is it.  Loved every minute.

Runs at Hampstead Theatre to 29 January 2022