David Richards revels under the spotlight of a legend at the Leicester Square theatre. 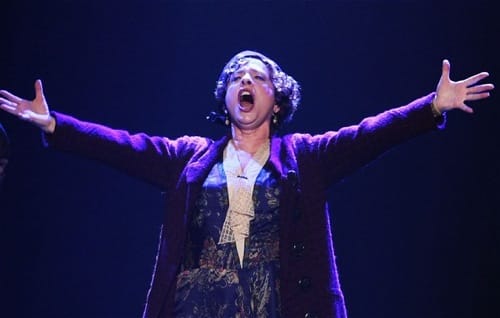 2 Tonys + 1 Olivier = one talented lady. The Leicester Square Theatre plays host to the musical theatre legend that is Patti LuPone to appear.

Seth Rudetsky is her partner in crime for the night (legendary in his own right as a performer, writer, radio and television host; a walking, talking, singing and dancing encyclopedia on musical theatre and its stars). Rudetsky’s initial job is to warm the audience up before LuPone reveals herself. It takes him literally seconds to have them guffawing. He is enthusiasm, passion, knowledge, entertainment, comedy (and what seems like 7 double-espressos!) combined as he gives a taster of his own current show Deconstructing Broadway, in which he does just that in a loving, but also hysterical manner.

The interval arrives with no show from LuPone but there is no sign of dismay from any patron. Rudetsky has done his job. The atmosphere is buzzing. It’s time for LuPone.

Less than a minute goes by between the time LuPone enters the spotlight and the first brassy note leaves her lips. She gives her audience what they all know, adore, and so desperately want to hear, Everything’s Coming Up Roses. If ecstasy were a fragrance the air would be rich with it, seeping from the overjoyed auditorium.

Her first song is a sensation, as is her second, and so on and so on. Not once does she dissappoint. She is as good as she ever was; powerful, brassy, sassy and bursting with stage presence. The lady is 64 years old and she’s ’still got it!’. She delights and excites her audience with Evita ‘original key!’ exclaims Rudetsky, and moves them to tears with some stunning Les Misérables, amongst many other incredible renditions.

LuPone and Rudetsky are a joy to watch, at times almost a comic-duo, as they chat about her career, laugh and sing the night away in a very casual, yet slick and professional fashion. Most audience members attending this show will be educated on the subject matter, and it’s fair to say that three full standing ovations from this particular audience are evidence enough to prove that they will not be disappointed.