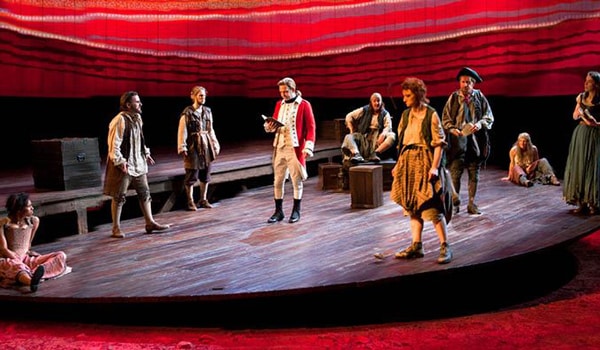 “The stage directions of Our Country’s Good make no reference to music until the very end. ‘And to the triumphant music of Beethoven’s Fifth Symphony…the first Australian performance of The Recruiting Officer begins’. The only allusion by any of the characters is from a sarcastic officer who suggests building an Opera House to accommodate the idealism of the colony’s governor. And yet in the National Theatre’s revival of Timberlake Wertenbaker’s hymn to the power of theatre, songs have been summoned from the wings.

The supply of music comes from Cerys Matthews, making her theatrical debut…(who) while delighted to be asked, was nervous of interfering. ‘I didn’t want to get in the way of the play,’ she explains, ‘I didn’t want the music to seek too much attention or slow the narrative.”

So reports Jasper Rees in an essay in the programme for Nadia Falls’ revival of Our Country’s Good, now playing in the National’s Olivier Theatre. Much as one might adore music, it is regrettably the case that Matthews’ music, which is pretty in parts, haunting in others, and out-of-place in yet others, does get in the way of Wertenbaker’s play; it does seek too much attention; and it definitely slows the narrative.

Indeed, Falls’ use of Matthews’ score all but shatters the spell of Wertenbaker’s words, especially in the first Act. The second Act fares somewhat better, but the damage has been done, and the true heights of magical embrace the words can summon up are never reached. 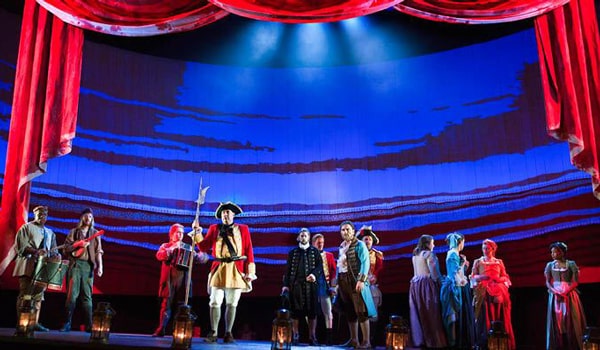 This is a wonderful play, an ode to the redemptive power of theatre. Based on Thomas Keneally’s novel, The Playmaker, Wertenbaker fashioned a very theatrical and resonant exploration of humanity, injustice, isolation and change wrought by the unexpected bonds and understandings caused by rehearsing and performing theatre. Everything turns on the words.

Indeed, one could be forgiven for thinking that the absence of music was deliberate, that Wertenbaker wanted to make the point that without the play, there was no civilisation, and therefore no music. With the play performed by the convicts, music was possible.

Governor Philip says at one point: “The Greeks believed that it was a citizen’s duty to watch a play. It was a kind of work in that it required attention, judgment, patience, all social virtues.” The focus of attention in the play is words and character and action – the key elements of theatre. Matthews’ score obfuscates the focus. The music does not support or galvanise the production.

This is about directorial vision, not some inadequacy on Matthews’ part. Fall seems unwilling to present the play; rather, she has attempted to make something epic out of an intimate narrative. There is an epic appeal in the play, but the mechanics are not epic. 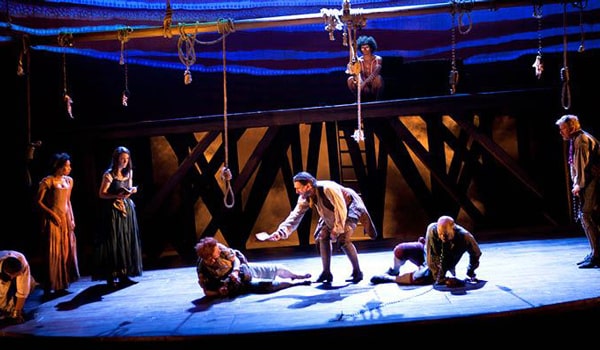 Staging it in the Olivier Theatre seemed odd before seeing Falls’ production; having seen it, it is clear that the decision to stage it in the Olivier has led to a false belief that it must be presented on a grand scale. The penal colony is an intimate place and the lives of convicts and military are lived on top of each other. A smaller space such as the Dorfman would have been preferable for this play.

Peter McKintosh’s set is remarkable and uses the huge playing space of the Olivier well. It starts simply – the indigenous Australian alone on a flat rock. A marvellous, slightly surreal, backdrop evokes the English sense of Australia – red earth and bright sun. This might not be what the penal colony actually encountered, but it does set up the notion of the foreign landscape where the indigenous Australian is at home and the First Fleeters are Intruders.

The rock splits and turns into the deck and hold of the convict ship, battered in the winds on the way to the new colony. A soldier brutally whips a convict. The convicts mewl and complain, the soldiers scowl and bark. And so the great hydraulics continue to spin, bringing different levels and playing areas into play. But it is all so vast, the vastness seems overwhelming.

The indigenous Australian (curiously named ‘the Aborigine’ in the programme when the original text identified the character as ‘An Aboriginal Australian’ – I doubt indigenous Australians would appreciate the change) is a kind of almost silent observer. He watches and dances and says the odd word, until he speaks of his impending death from an Intruder disease. His lines are unaccountably cut. There is nothing very authentic about the portrayal, but authenticity is not at a premium in Falls’ production. Rather, the character is presented in a kind of operatic way, an exotic counterpoint to the goings on in the colony. 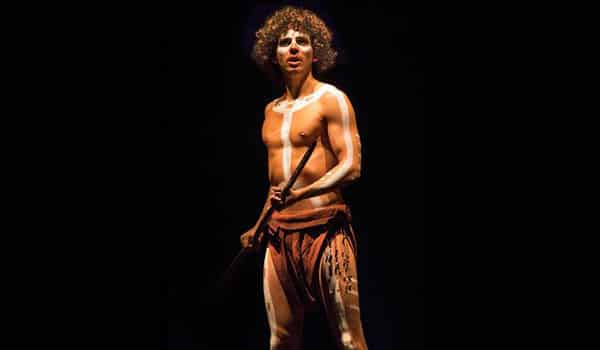 Curiously, for a production that elects to cast a black actor as the very white Governor Phillip, the indigenous Australian is not played by a black actor. In a world where Trevor Nunn is attacked for his all white casting of the War of the Roses, this seems, to say the least, odd. This is not to say that Gary Wood is not excellent in the role – he is – but not using a black actor to play a part that is inherently for an outsider of a different skin colour to the colony is, to say the least, surprising.

But, then, there are many surprising choices about the way characters are played. Many of the convicts are depicted as overblown caricatures and many of the military personnel are played as blacker than black (hearts, not skin colour). But these sweeping broad brush strokes are inapt for a play that shimmers with subtlety, where ambition and desire can reveal multi-faceted aspects of particular people. In truth, there is no black and white in the characters encountered in the play – almost all have faults and strengths, and almost all are fundamentally changed by what happens as a result of the rehearsing of the play.

Fall pays more attention to interpolating Matthews’ music into the play than to ensuring the subtleties and underlying strengths, weaknesses and confusions of the characters are clearly portrayed. Jodie McNee’s Liz Morden is so absurdly extreme and animalistic at the start of the play that the changes in her nature seem fanciful – equally, Peter Forbes’ hissing and malevolent Major Ross is thoroughly the villain, when actually the role offers more nuance than that. Falls lets these two come across as a kind of wretched Nancy and Bill from a rough production of Oliver! 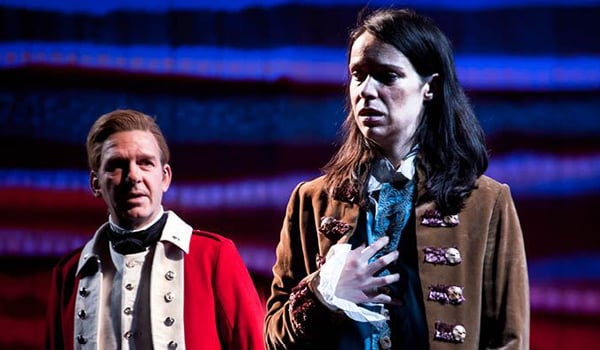 Happily, there are some excellent performances. Matthew Cottle is genial and affecting as Wisehammer, and his obsession with words is properly essayed. Lee Ross is splendid as the thespian-in-waiting Sideway, who dreams of being the Garrick Down Under. Caoilfhionn Dunne and Tadhg Murphy are quite lovely as Mary and Ketch respectively and Jonathan Dryden Taylor is the most successful of them all in conveying the sense of how the experience of the rehearsal process has altered Arscott’s outlook on life. Jonathan Coote is suitably legalistic as the colony Judge, Captain Collins, but slightly too angry when guile and cunning would be preferable.

Jason Hughes gets by as Second Lieutenant Clark, and he is much better in the second Act, but the part offers greater harvests than are reaped here. The dynamics between Hughes and Forbes are too obvious, not sufficiently complex enough to allow the character to shine, and Hughes is not helped by Cyril Niri’s lacklustre turn as Governor Phillip (a serious piece of miscasting). He does work well with Dunne’s Mary, and their romantic climax in Act Two is genuinely lovely.

Wholly unconvincing, and detrimental to the overall success of the intricate drama, were Jonathan Livingstone’s Caesar, Shalisha James-Davies’ Duckling, Paul Kaye’s Harry Brewer and Ashley McGuire’s Dabby Bryant. Each was one dimensional and too extreme for the task here. Again, this is a question of Fall’s vision.

The choreography (Arthur Pita) and the fights (Kate Waters) did not blend seamlessly with the acting. Like the music, at times they intruded upon rather than enhanced the acting. The singing from Josienne Clarke was first rate, but unnecessary. While Neil Austin’s lighting was exceptionally good, and Carolyn Downing’s sound design precise and nicely balanced, they were not enough to enliven the production.

No. Fall has misunderstood the play and, by seeking to make her mark on it, has come dangerously close to obliterating its impact. Bad casting and bad direction, however, is not enough to completely scupper Wertenbaker’s great play. In the end, the magical words she wrote come through – overcoming lightweight performances, an indulgent set, too grand a space and some interesting, but tiresomely intrusive, music.

When will the National Theatre under Rufus Norris simply give an audience a revival of a play that is about the text and not the director? Or is that too much to ask? Tricks are not necessary. Ralph and Mary make that clear in the play:

“Ralph: People who can’t pay attention should not go to the theatre.

Mary: If you act well, they will have to pay attention.”