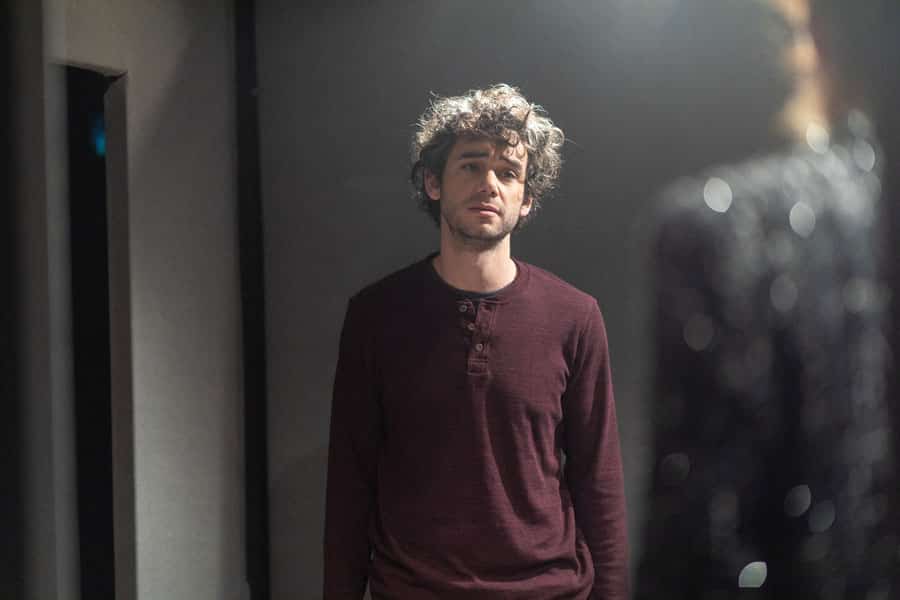 Before I’ve even watched One Jewish Boy, I’m aware that this play has caused a stir. The show’s writer, Stephen Laughton, has faced a wave of antisemitic abuse on social media since publicity for the show started back in September. Posters for the production at the Old Red Lion Theatre have even been defaced and torn down. As One Jewish Boy charts the rise of antisemitism in recent years, the appalling behaviour of the play’s detractors has made this story all the more timely and necessary to tell. 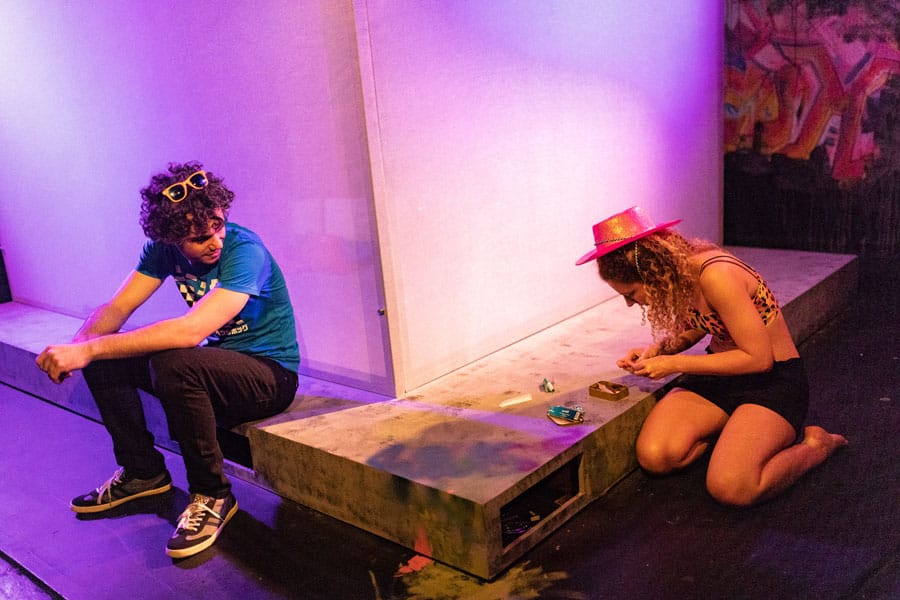 Speaking to The Guardian, Laughton said: ‘‘This play has been written from a place of tangible fear. Things that were on the fringes of the far right and the far left have started creeping into the mainstream. In the last few years, it seems like people feel they have permission to be antisemitic.’’

These are the powerful issues that are unpacked in Sarah Meadows’ 80-minute show. The narrative focuses on the relationship between Jesse, a Jewish man, and Alex, a mixed-race woman from a non-Jewish background. The play charts the ups and downs of their volatile relationship over nine years, with neon lights alerting us to the different year each scene takes place in. 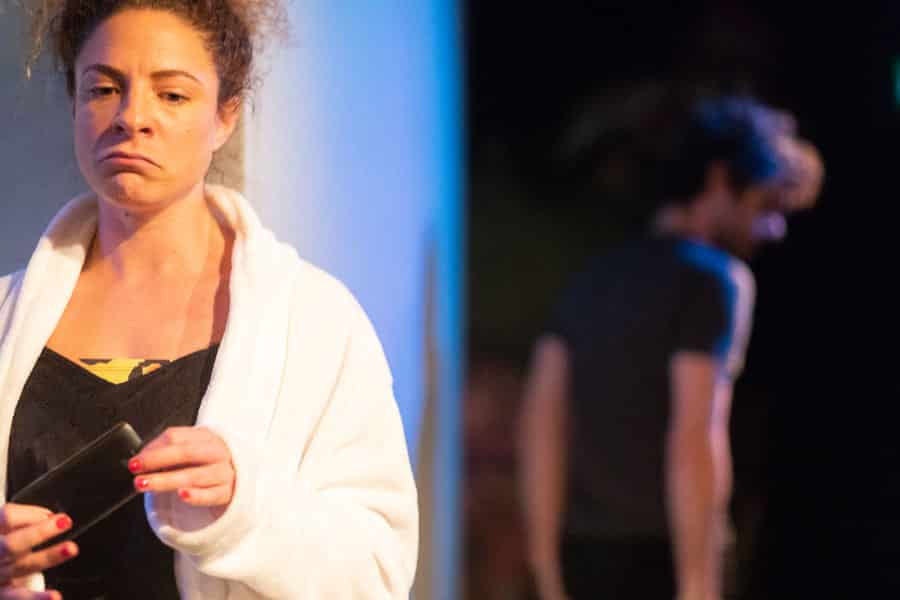 Through Jesse’s eyes, we get a sense of the very real prejudice the Jewish community face. Even Jessie’s old neighbour, who he cares about deeply, believes that Jewish people are ‘making up’ the allegations of antisemitism in the Labour party. Jesse is finely attuned to all these microagressions, and this is quite understandable when you discover that he has experienced abuse first hand – having been viciously attacked, physically and verbally, in his twenties. This scene is viscerally re-enacted to a soundtrack of antisemitic slurs – a harrowing experience for the audience. It is this violent attack which leads him to meet his future wife who calls an ambulance for him.

Asha Reid and Robert Neumark-Jones play the lead roles superbly. They beautifully plot the different stages of Alex and Jesse’s relationship – showing the tenderness, the love and the difficulty they both encounter to overcome the fear that has been engrained in Jesse’s identity since the attack. 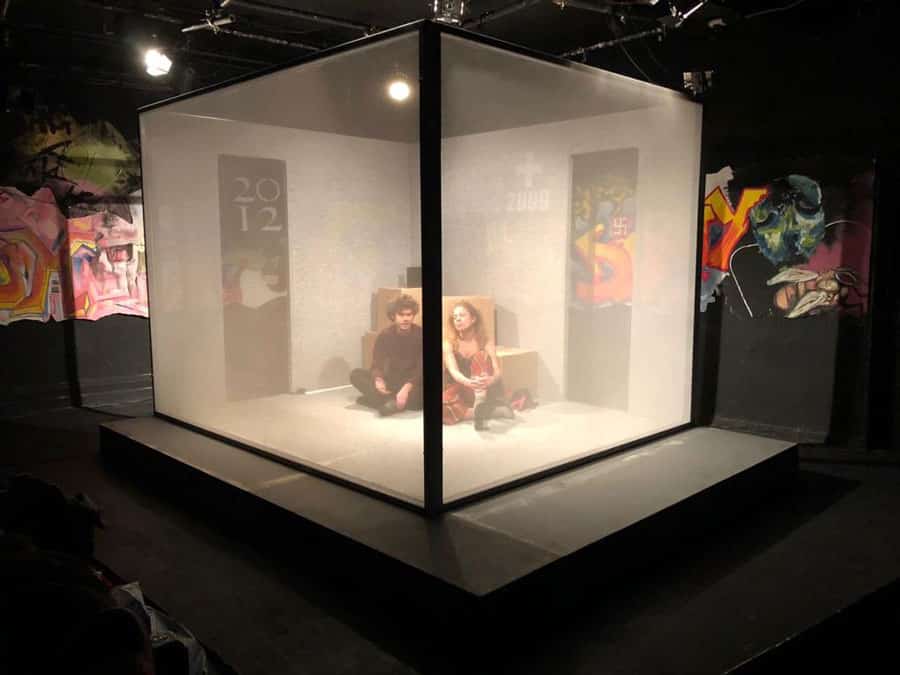 Reid gives a blistering performance as Alex, a sparky, funny and strong woman who cares so deeply for Jesse that she spends years of her life trying to free him from the fear that has slowly grown into a deep-rooted obsession. Neumark-Jones digs deep in his scintillating portrayal of Jesse, a disturbed and complicated individual struggling with his ‘inherited trauma’. We root for them both and want them to work things out, no matter how stark their shared future looks.

Meadows has done a terrific job here, keeping the action moving forwards and crafting brilliant shifts in energy and pacing. She deftly makes the connections between the characters’ personal experiences and the social and political structures that inform them, while expertly avoiding the pitfalls that might lead this play to become overly didactic. There is a lot of humour in this production too, which is a welcome counterpart to the more intense moments in the play. But it is this very intensity that will hopefully spark many long overdue conversations.

This is an absolutely fantastic show and very necessary viewing – necessary in the sense that you leave the theatre with a more profound understanding of an incredibly complex issue. If you want to learn more about antisemitism, then you must watch One Jewish Boy. Informative. Gut-wrenching. Heartbreaking. Moving. This play is one not to miss.

BOOK TICKETS TO ONE JEWISH BOY

Mark Reed is an actor and writer who recently penned his first play, Awkward Balloon, which premiered at the Old Red Lion Theatre in July 2018. He studied acting at Drama Studio London and has worked in theatre, film and radio. Mark is an avid theatre goer and is particularly passionate about new writing and Shakespeare. He also works in communications for a national charity, looking after their social media, press and key publications.