Julian Eaves reviews Once Upon A Mattress the musical now playing Upstairs at the Gatehouse. 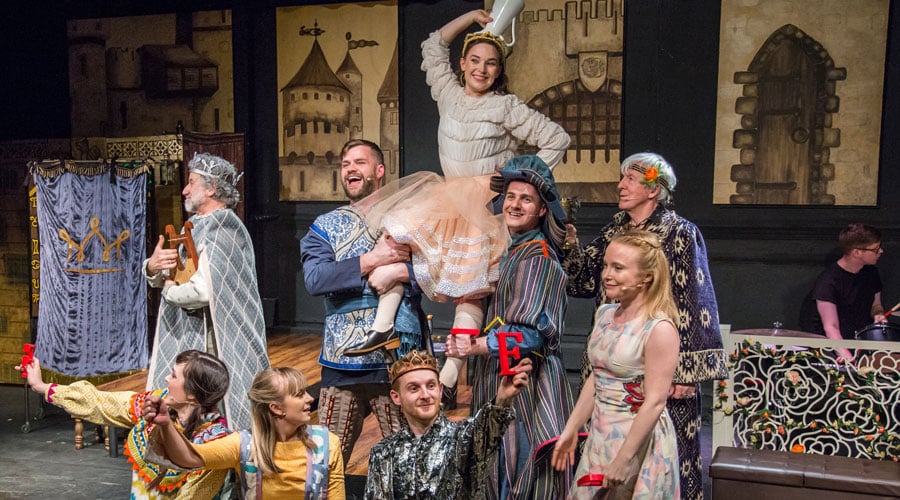 Once Upon A Mattress
Upstairs At The Gatehouse,
7th March 2020
2 Stars
Book Tickets
The saucily suggestive title of this show is – I hate to disappoint you – about as exciting as it gets.  This prim, rather po-faced re-telling of the Hans Christian Anderson story, ‘The Princess and the Pea’, has nothing whatsoever ‘adult’ about it: adapters Jay Thompson, Dean Fuller and Marshall Barer (the latter is also the workman-like, occasionally inspired lyricist) make this into an unrelentingly innocent, wholesome and childish view of the world and humanity, full of gauche, simplistic Fifties’ optimism.  Were it to be aimed at children, especially those under 10 years of age, then it might have some legs.  Mary Rodgers launched this show in the same year as her dad’s ‘The Sound of Music’, which only serves to emphasise the massive gulf between their talents.  As it is, it is hard to see it appealing either to mainstream musical theatre audiences or to those looking for something to take the kids to.  Which may come as a bit of a surprise: in the USA it regularly gets revived, and indeed it has been done here (in 2003, at the Landor) with some respectable success.  What, then, is preventing the current production at Highgate from working? 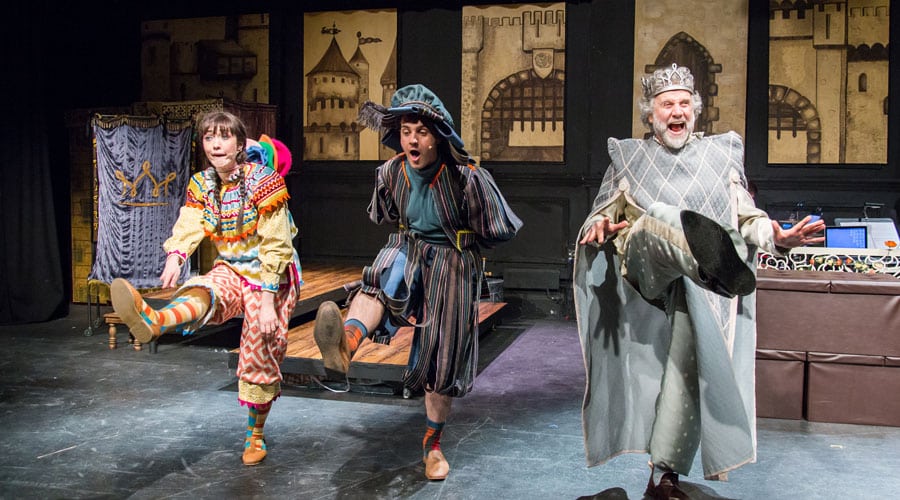 Well, to begin with, director Mark Giesser’s presentation starts by looking like it’s ‘in trouble’.  The stage is configured in the same way as with his previous work at this address, last year’s ‘Strike Up The Band’, putting the band at the crowded rear of the acting area: MD Jessica Douglas has the musicians well under control, and delivers a perky rendition of Rodgers’ score, making the most – through her own fulsome arrangements – of its melodic charm and rhythmical energy.  Sonicly, we hear pure 1950s Broadway.  But that isn’t what we get in the set design by Giulia Scrimeri.  There are a couple of wheeled flats, which get moved around a bit, and a huddle of boxes and a couple of rostra under which lurk piles of soft furnishings, all of which give this production a fairly chaotic ‘look’.  By contrast, some comparatively lavish costuming creates a kind of ‘panto’ style, in which garish colours and bizarre contrasts in patterns and fabrics are used to ‘suggest’ the mid-fourteenth century, or at least the kind of fairy-tale world where princesses have their sleep disturbed by nothing more frightening than a dried legume. 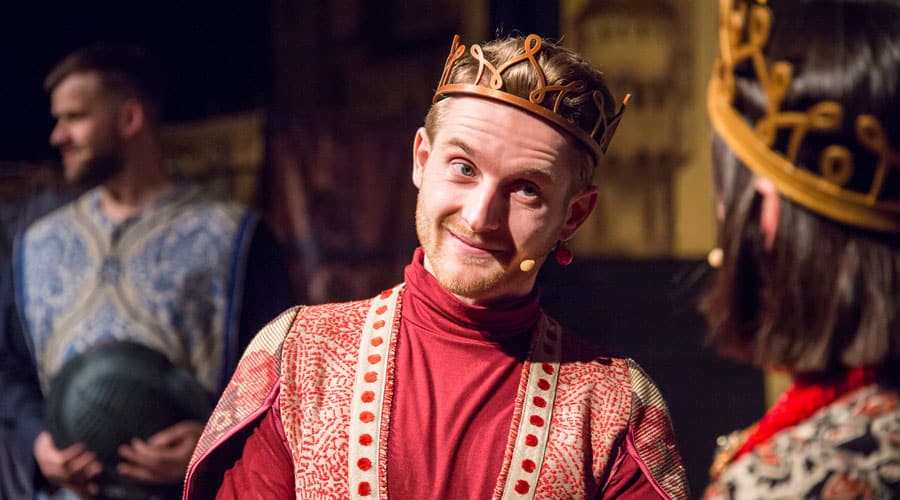 While the costumes suggest a manner of acting that may be broad, what Giesser wants here seems to be bold, brazen, two-dimensional characterisations from his determined cast.  Nothing is allowed to be ‘real’ in any of their scenes, where all emotional journeys are from 0 to 60, accomplished in three seconds flat.  So, the ‘book’ dialogue gets blared out at us with little or no variation, nor with any of the seductive allure of panto tradition (there is no audience involvement, and no sense of anything ritualistic about this).  Instead, we remain passive observers throughout, struggling to find any point of human contact with this interpretation, while the emphatic directness of the acting is always bewilderingly at odds with the deliberately cheap, zany opulence of the costumes.  What is possibly missing here is a securer grasp of the essentially ‘vaudevillian’ spirit of the piece.  A lightness of touch, an artless carelessness of approach that finds the essential harmony with the script and score’s frothy sense of fun.  We get hints of this is in many of the clever touches in Chris Whittaker’s sometimes really spot-on choreography: but the direction doesn’t capitalise on the jokey grotesqueness of the production design; worse, it fails to find the magic in the story. 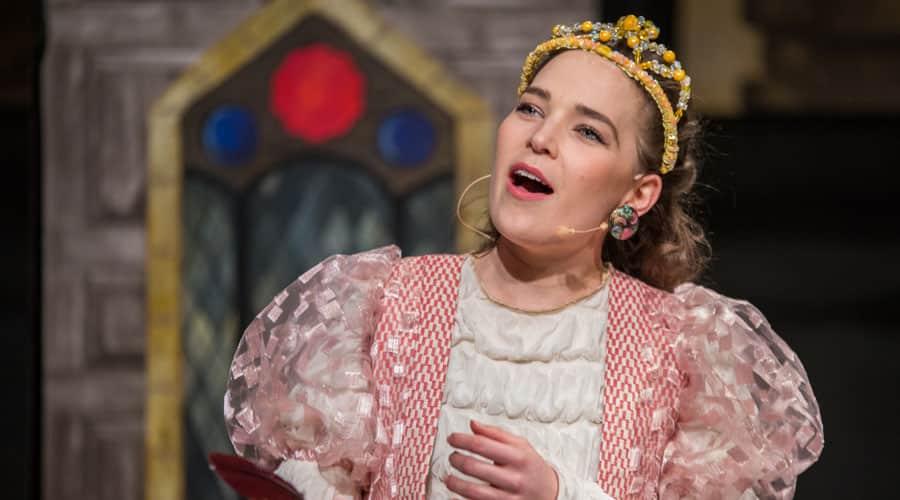 Nevertheless, it is easy to sympathise with the strong cast, who are stuck with an impossible task.  In the ‘lead’, Beth Burrows pours energy into her role as a US-sounding Princess Winnifred; but how can she make her super number ‘I’m shy’ really land, when it – like the rest of the show – has to be put across on the shambolic mess that is this stage?  She also has difficulties with audibility, which may have something to do with Andrew Michie’s sound design, but probably a lot more to do with the fact that apparently the show had not had a technical rehearsal before its press night (something else to ask the director about).  Jess Pomeroy’s lighting runs into the same problem.
Technically better served was Theo Toksvig-Stewart as Prince Dauntless, and no prisoners were being taken by the scary, stereotyped bully mother-in-law Queen Aggravain (geddit?) of Julia Faulkner.  The 1950s are no place for people who dislike nastily superficial sexism.  Rachel Louise Miller’s stunning voice rings out clear and true in her many musical numbers as Lady Larken – if only her part were put across more thankfully.  Rachel Lee-Gray produces a fine sound for The Jester/Princess 12, and Scott Armstrong sounds pleasant as the romancing Sir Harry, while Matthew James Willis is full of pep as The Minstrel.  The robust cast is completed by John Sears as The Wizard and Courtney Hammond doubling as Lady Rowena and the Nightingale of Samarkand.  They’re a fine bunch of players, but this material, in this production, doesn’t allow us to see them at their best.  As a curiosity, it may be worth checking out, and for the undemanding it offers a couple of hours of polite escapism.

Otherwise, please click here to continue to Upstairs at the Gatehouse...
x
Send this to a friend