Julian Eaves reviews On Your Feet, the story of Gloria and Emilio Estefan now playing at the London Coliseum as part of a UK Tour. 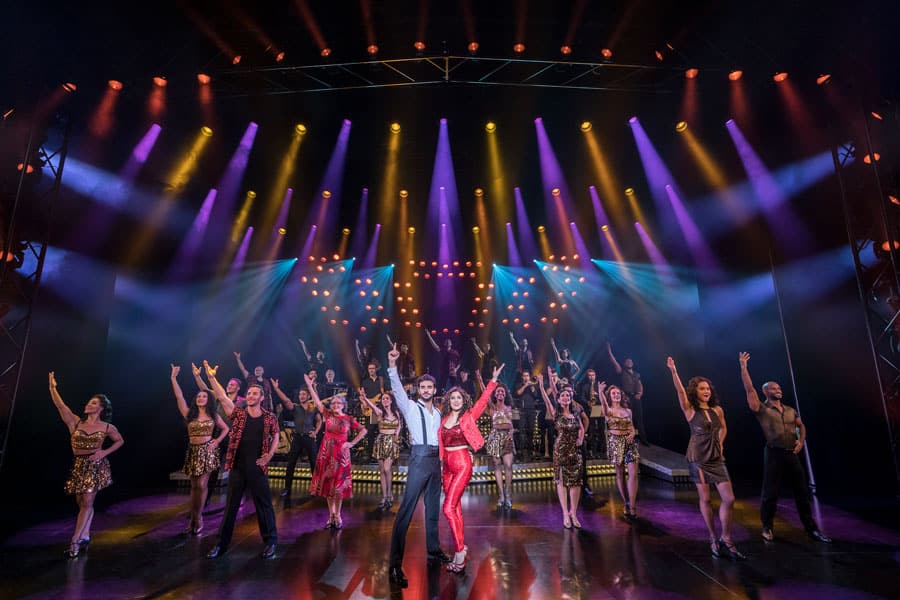 This should be a fun show, packed full of the wonderful music of Gloria Estefan – the 80s Latin-pop star with a voice like a kind of in-tune Madonna crossed with Karen Carpenter, and gifted with a stonking ability to write hit songs.  It bills itself as ‘a new musical’, but its format is really nothing more than a staged chat-show interview along the lines of ‘And then I wrote…’.  The book by Alexander Dinelaris asks us to take an interest in how Gloria became the front-girl (and wife) for Emilio Estefan’s band, Miami Sound Machine, and how their combined tenacity, self-belief and passion enabled them to ‘cross-over’ from the Latin pop market into mainstream global music consumption.  But, to be perfectly honest, even though director Jerry Mitchell and Latin-heritage choreographer Sergio Trujillo throw everything they’ve got at it, the show rarely amounts to more than a lecture: despite, or perhaps because of, the close involvement at every stage of the guiding intelligences of the Estefans, the dominating personalities at the centre of this amazing journey remain elusive, no matter how much even die-hard fans of the artists may want to care about them.  Ultimately, their show seems remote and uninvolving. 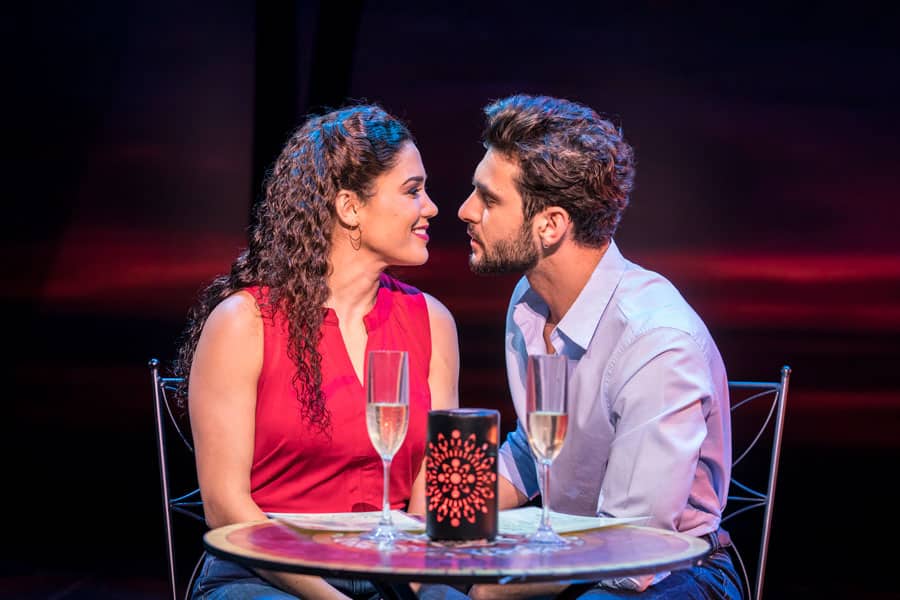 Why is this so?  The spectacle ran respectably well enough on Broadway, but success on one side of the Atlantic does not necessarily survive the crossing.  However, I think the explanation for the show’s lack of magic is simpler.   Even with the weaknesses in the script as they are, were this show to be presented in a theatre a fraction of the size of the Coli, then it might have a better chance of connecting with the audience.  After all, the music is terrific (musical direction by Clay Ostwald, leading an onstage band of 10, including some original members of Estefan’s group), and the choreography zingy, and Mitchell’s direction is clear as a bell and a model of fluidity.  Think of, say, ‘Sunny Afternoon’, another show with a wafer thin ‘plot’ and only a string of hits to hold it together: had that been produced in the cavernous hollow of the 2200+ seater Coliseum, it would have died.  Just like that.  But, presented at the Hampstead Theatre and then at the Harold Pinter (which seats about 800) it ran for two years in the West End and has since toured well, capitalising on creating a strong and vivid bond with its audiences.

And that is the kind of future one could easily imagine for this show.  With some judicious re-writes, to emphasise the element of struggle, perhaps, doing away with some of the less pertinent biographical excursions, and cutting the chorus and band to the bone, this could well turn into a really successful entertainment over here, too.  It was a miscalculation putting it into the Coli.  While that error may well curtail its forecast run (on press night the entire balcony – 500 seats – was shut, and the Upper Circle was decidedly roomy with lots of empty places to choose from, and that is with a certain amount of papering going on – a big, expensive, commercially run show in this venue is not going to survive on figures like that), it need not mean the end of the show completely. 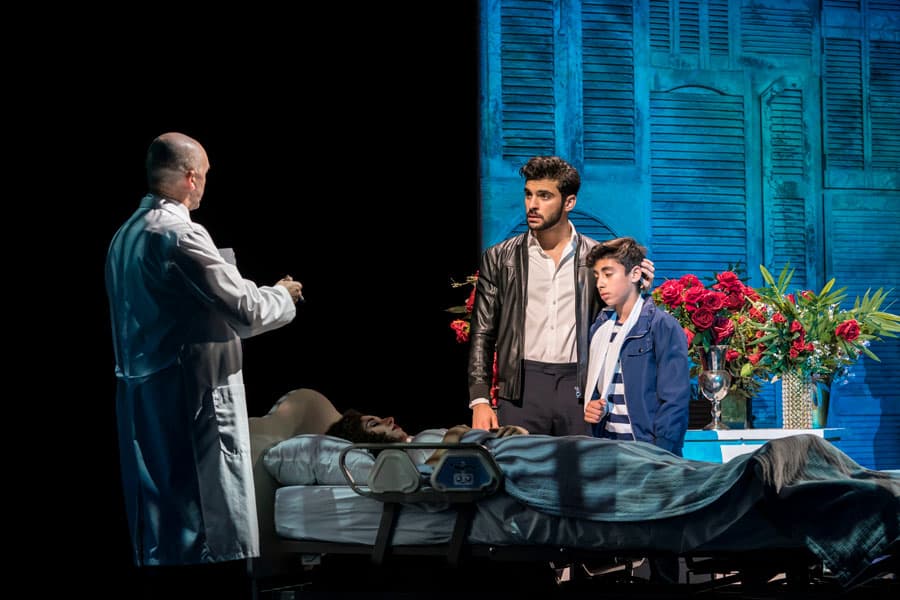 I certainly hope it isn’t.  In the female lead role, there is a performance of great personal magnetism and tenderness, energy and sensitivity produced by the exciting actress, Christie Prades: she looks every inch the young Gloria singing and dancing with explosive energy through the up-tempo numbers; but it is in the delicious ballads, some of the pop canon’s finest – ‘Anything For You’, ‘When Someone Comes Into Your Life’ – that the extraordinary talent of this superb songwriter really shines.  The script turns another great solo of the Estefan back catalogue, ‘Here We Are’, into a duet, which is less successful.  Prades’ leading man, George Ioannides, has dashing dark Mediterranean looks, but he is a young actor with comparatively little stage experience and comes across as rather stiff and uncomfortable: there is little sense of a great romance between them, and not much inkling of his considerable business acumen – he seems not yet to have acquired the ability to project a characterisation into the immense space of an auditorium like this one.

Much more secure is the gorgeous turn of Madalena Alberta as Gloria’s mum, Senora Fajardo: in fact, the very strength of her presence on stage reminds us powerfully of that other musical with a tense, complicated mother-daughter relationship at its heart, ‘Gypsy’.  But then, her role, although briefer, is written much more expansively and freely, allowing the actress to create not only light but also plentiful shade in her persona.  Even better is the peach of a part of the gran, Consuelo, in which Karen Mann walks away with every scene she appears in, and – crucially – enlivening the proceedings with much-needed humour.  When she is absent from the stage, the script has a tendency to become rather solemn and even po-faced. 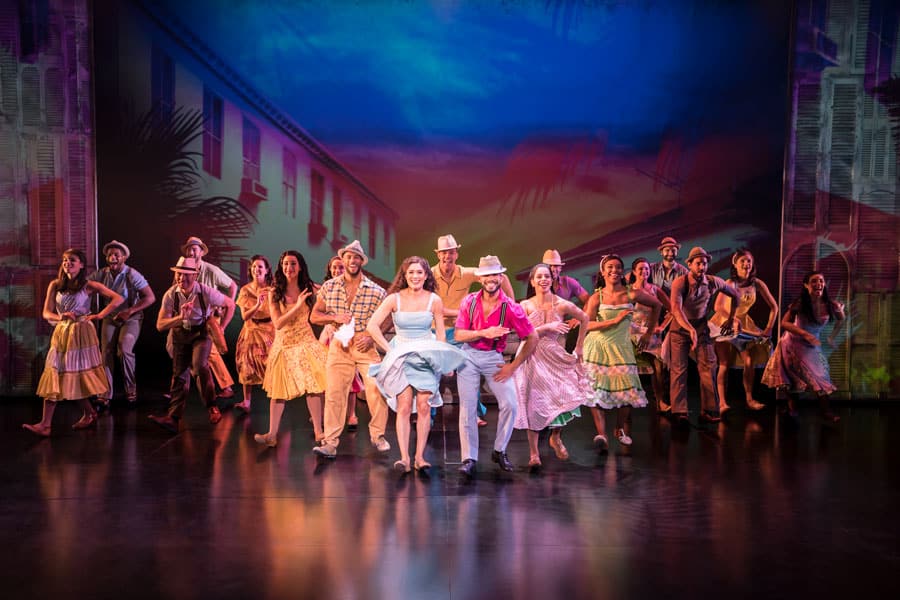 Of the other featured players, Elia Lo Tauro as Gloria’s dad, Jose, has the near impossible task of constructing a coherent performance out of a handful of entirely unrelated and unrelatable scenes, a mission made even more challenging when his character loses the power of speech.  However, at the eleventh hour, he does get to sing one of the show’s best tunes and shows that he has a voice matched the purpose and space, even if he, too, runs into the tricky problem of how to ‘sing’ pop music in a large theatre.  It is by no means an easy task.  Pop music isn’t at all designed to be sung in such circumstances, and it presents the performer with a myriad of difficulties which electronic amplification only partially solves.   Carl Patrick acquits himself well on technicalities in his two sparsely written roles of Phil and Dr Neuwirth.  The rest of the show is amply fleshed out with a busy ensemble of 18, who play everything from Cuban washer-women to US GIs in Vietnam.  While everything they do, sing or dance is admirably executed, for all their frenetic activity or artful poise, sadly nothing helps us get any nearer to the heart of what this show is really about.  And there are two kids – a girl and a boy – who are drawn from teams of three to pop up here and there, lending a certain intermittent cuteness to the package.

Yes, it is handsomely staged, with cleverly interleaved projections (by Darrel Maloney) on David Rockwell’s functional and supple set (with the large dance orchestra wheeled back and forth from the rear of the stage by a mighty truck), and its all lit with busy importance and razor-sharp judgment by Kenneth Posner who tries so hard to bridge that yawning gulf between the stage and its audience.  As indeed, it has to be said, does the booming sound design by SCK Sound Design and Andrew Keister.  But all of this is in vain.  The harder this show strives to reach us, the less we are convinced that it actually has anything much to say.  Perhaps, if it took its foot off the gas for a bit, and allowed the music to speak more for itself, we might like it a lot more.  As it is, I think it’s got a battle ahead of it to find an audience.