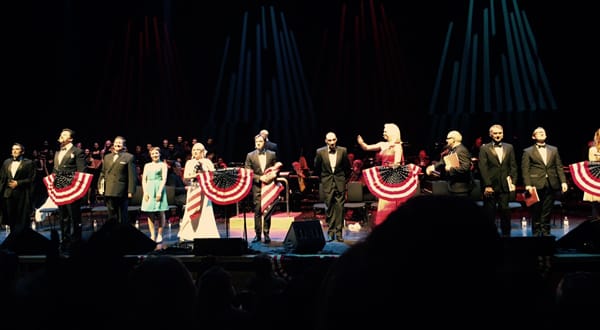 The key to any successful staging of a musical is balance. Balance between words and music, between voice and orchestra, between character and vocal line, between dialogue and score, between choreography and music, between chorus and principals. The need for proper balance, the absolute fundamental necessity of it, is only increased, exponentially, when the musical is relatively unknown and the performance is not fully staged, but a concert presentation.

Without balance, the experience can be unrewarding. For everyone. Performers and audience. In egregious cases, audience members can feel as though they have been physically assaulted by the sound, as though their eardrums may shatter if the deluge of exhaustingly loud sound continues.

Regrettably, so it was with the concert presentation of Of Thee I Sing, a collaboration between Ira and George Gershwin, George S Kaufman and Morrie Ryskind. It was a hit in 1931 and, the following year, was the first musical to win a Pulitzer Prize.

You can see why. The script is a merciless lampooning of great American institutions – the Presidency, the Vice Presidency, the two party system, the U.S. Supreme Court, and US Foreign Policy. In its day, it must have been quite shocking. Indeed, it still has a number of relevant notions for modern politics.

The story centres around a young go-getter who nominates himself as his party’s presidential nominee. The party machine is incompetent, entitled and oblivious. They decide that the way to ensure electoral victory is to run a competition to find a bride for the candidate – after all, America will vote for love.

Trouble is, the candidate decides he wants to marry an aide who can cook corn muffins. He refuses to marry the girl who wins the contest and marries the aide and is elected. The jilted maid, a Southern lass with determination writ large on her character, rouses the country to oppose the President’s breach of contract and insist he do right by her.

An impeachment follows and so does topsy-turvy chaos that throws things into disarray.

The whole thing has the feel of an American cousin of one of Gilbert and Sullivan’s later operettas (Utopia Limited or The Grand Duke) but with a Broadway fizz. Indeed, in terms of form, it is most mercurial. It is clearly satirical, but the satire comes in odd ways – long sections of dialogue, long sections of sung-through music, big numbers. It feels part revue, part book musical – but really it is a show which just lampoons everything it can think of, including the musical forms which were its predecessors.

The passage of time has blunted the sharp edge of the satire, but the basic themes are still relevant now, especially those that involve the white patriarchy abusing the political and legal systems and treating women appallingly. The characters are wildly overblown, not exactly types, but eccentric characters writ large. So, in the best moments, Of Thee I Sing presents the perfect blend of exaggerated character, idiotic situation, sly observation and soaring melody. Played the right way, brashly, boldly, with vivid strokes, it should be quaint, delicious fun. It might have been a riot in 1931 but pleasant amusement is the main aim now.

Because it is relatively unknown, the key thing any production of Of Thee I Sing needs is balance – it must be possible to hear both the orchestra and the singers, the music and the words, so that the sense of what the Gershwins were doing with the score is clear and it can be enjoyed for its full value. Diction is important, but more important is balance.

Unfortunately, there was no balance here.

Proceedings started well enough with the playing of the Overture. Although not immediately infectious, the melodies were clear and the ones that once were standards stood out in that “I didn’t know that song was from this musical” way. The playing was sound and intricate and promised much from what was to follow. Musical director Michael England and the Royal Philharmonic Concert Orchestra clearly could deliver the goods.

But when the singing was added, it all went wrong. This was nothing to do with the singing, which for the most part was impeccable, and everything to do with the balance between orchestra, singer and sound system. The mix into the auditorium was completely wrong, the voices of the singers amplified far too sharply, almost to the point of volcanic distortion, and the work of the orchestra relegated almost to nothingness. It takes some skill to blend a 26 piece orchestra entirely into the background on a Concert platform, but it was achieved here.

The fault for this must rest squarely with the Venue and the producers for this event, Senbla in association with Eliot Davis. Inadequate rehearsal time will inevitably lead to this kind of problem. There is no excuse for it and it diminishes everything – the work, the performers, the orchestra and the sound operators. Not to mention the audience’s ability to enjoy the performances. Venues, especially brands like the Royal Festival Hall, need to ensure that Producers provide the goods which audiences often, if not invariably, pay for because of their brand.

For the Royal Festival Hall, it is unforgivable.

Thank goodness for the sheer professionalism for the main cast.

Hadley Fraser was in terrific form, easy, relaxed and suitably smarmy, as the President, John P Wintergreen. His voice was perfectly suited to the score and he effortlessly managed to both croon and soar as required. Somehow achieving a blend between David Cameron and John Kennedy, Hadley was irresistibly charming, sweetly funny, and, with blooming top notes, a joy to hear.

As the two women in his life, the corn muffin making Mary Turner and the Southern Belle with her eye on the White House, Diana Devereaux, Louise Dearman and Hannah Waddingham were as dependable as ever. Waddingham was given a better deal in the frock department, but both were in excellent voice. Dearman did her best with a character that made no sense (and is pretty offensive in terms of modern gender politics) and imbued everything she did with real charm. Her voice was radiant and beautifully controlled, especially at the top. Her duet work with Fraser was excellent.

Waddingham made Deveraux unforgettable; with a raucous Southern twang that revelled in its extremity, she faultlessly presented the woman wronged that everyone in the fictional world appears not to care about, possibly because she comes from the South. As far as it was possible to care for the character, Waddingham ensured the audience did – with clever, clear characterisation that was constantly inventive. She sang full throttle too, making every note count.

There was excellent work too from Nicolas Colicos and James Barron, both of whom have big, impressively dark toned baritone voices of the type rarely heard on West End stages these days (sadly). Gavin Alex and Daisy Maywood brought good old fashioned song and dance chutzpah to the proceedings.

But the comic performance of the night, and the source of most consistent pleasure, came from the very talented Tom Edden who made an acting masterclass out of the portrayal of the reluctant Vice President, Alexander Throttlebottom (is there a character in a Broadway musical with a better name?). Taking his cue from that name, Edden presented a neurotic, chaotic, frantic but ambitious, character: he stole every scene he was in and even some he was not in. Superb.

Of Thee I Sing is never going to be revived for a long season anywhere; its day has passed. But it is still an interesting piece and it has an amiable score and some genuinely funny passages. The pastiche nature of some of the melodies ensures continuing appeal and if you like Gilbert and Sullivan there is enough similar here to keep you engaged. Properly cast and with everyone following the rightly overblown style of Edden, Waddingham, and Colicos here, it can be daft, rousing joy. (Shaun Kerrison’s direction could have accentuated that more.)

But it needs balance. And there was, alas, none at the Royal Festival Hall. And not even a gifted cast could fix that.