Julian Eaves reviews Naked Boys Singing, a revue now playing for a limited period at the Garden Theatre at The Eagle, London. 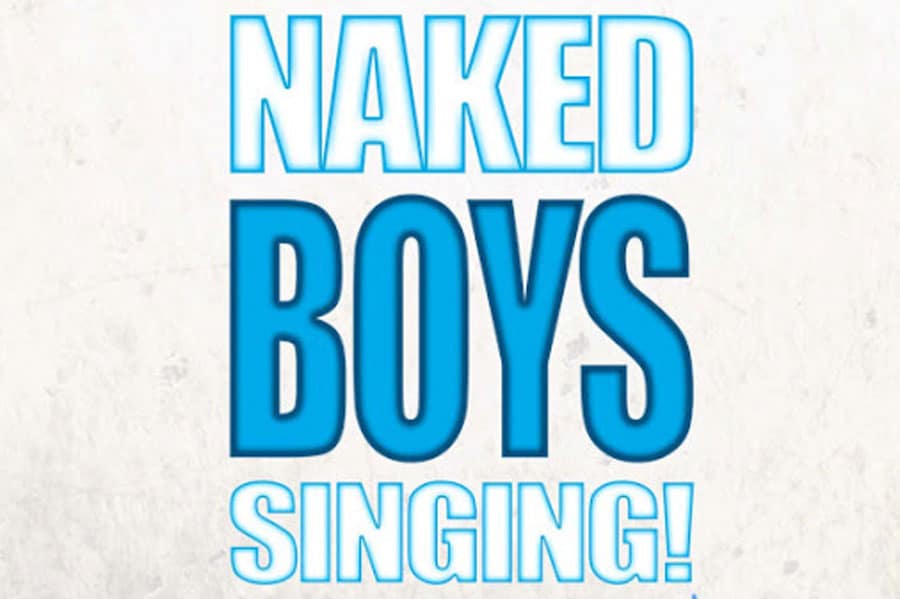 Revue is a difficult form to get right, and this one is no exception.  The work of many hands (no fewer than 13 writers are credited), this is a more than usually loose collection of vignettes built around the even looser concept stated in the unpretentiously honest title.  With nothing more specific to work on, the content flits in this direction, and then that, without any unifying concept or attitude to pull it all together into any kind of meaningful whole.  It’s just a sequence of numbers, and only musical numbers at that: the absence of any dialogue scenes makes this more a ‘song cycle’ around a visual gimmick, and really not much more than that.  The opening, ‘Gratuitous Nudity’, says it all.  There is nothing more to expect or hope for from this line-up of six boys who often (but not always) appear with their kit off.  Even the initial stab at dragging the sixth member of the troupe out of the audience and onto the stage doesn’t have a chance to ‘go’ anywhere, which is a shame because the establishment of any kind of clear relationship between the stage and audience is always welcome.  Advertised as a ‘campy musical’, there is in fact not much camp and nothing of a book here whatsoever: if you go expecting characters and plot, forget it.

But the cast are pleasant.  Liam Asplen is the hapless mobile-user ‘forced’ on stage as a ‘consequence’ for being on his phone during the show, trying to summon Lynn Barber (this is a funny, contemporary and local quip that promises something for the script of the show – it is a shame when it doesn’t go anywhere, but then neither does anything else).  He has a light, rather innocent-sounding voice.  Indeed, the dominant mood is rather prim and sweet; you could probably take your mother to this and she’d find it charming.  No wonder it’s run Off-Broadway for a dozen years.

Nick Brittain cuts a fine figure with his dancer’s physique and his clear tenor, making the most of a fine pastiche Bob Fosse number or two.  Carole Todd’s choreography (she also directs) is one of the chief joys of this production: she is inventive and delightful, placing her cast on a taped down floor, where, with Aaron Clingham’s capable keyboard for accompaniment, she gets her performers to work wonders in temperatures hovering around 7 degrees (like being in a fridge, then, although three glowing bars over the stage indicate heaters: I don’t know if the lads benefit from them, but I was on the front row and totally unaware of them having any effect).  The boys must surely love Todd’s most active and energetic routines, which provide them with a chance to get a bit warmer.  However, an awful lot of the music is surprisingly downbeat, which has a lulling, rather soporific effect.  The cast perform without microphones in this intimate space, and I have no idea how they keep their voices warm, but they find some beautiful harmonies and make a fine sound.

Meanwhile, I sat huddled under sweater, scarf, woolly hat and gloves, and I was absolutely perished, shivering in an icy draught blowing down onto me like a particularly vicious air-conditioning system.  It was gruelling.  How the cast managed not to shiver is utterly beyond me.  But when you are built like Kane Hoad – the most athletic of the troupe – you maybe are made of sterner stuff!  But that masculinity didn’t really find itself at home in the flip, superficial humour of the lyrics, despite us being told that nakedness is just offering us another ‘window to the soul’.  Sadly, I didn’t see a whole lot of soul in this show: intermittent sentimentality, yes, but nothing weightier.  This fluff makes ‘Hair’ look like Howard Barker.

Nonetheless, Daniel Ghezzi effected a more cerebral presence, lending a quiet dignity to his appearances.  Daniel Noah had some sweet moments of his own, playing a winsome type with longing in his eyes.  And Jensen Tudtud got the best crack at laughs with his ‘naked cleaner’ act.  Their numbers did everything you would expect them to – ‘It does what it says on the tin’ was a comment dished out by another reviewer tonight – and if you are only looking to have your (simple and uncomplicated) expectations met in the theatre, then this is a show you might well like.

It doesn’t take you on a journey, it doesn’t ask awkward questions, and it certainly doesn’t make you think.  But it provides flesh with tunes and some smart moves.  With a dearth of other shows to choose from, this isn’t going to do any harm.  And, watching it, you can also know you are doing something to keep theatre alive, just at the time when the government seems to have pushed the auto-destruct button on the whole UK theatre industry, and so much more.  The host venue, The Eagle, is operating at around 25% capacity and only really functioning because of the presence of this outdoor cabaret space in their backyard.  This show has opened in rep with a revival of ‘Pippin’, and others are coming up in a programme filling the entire winter: tiers and lockdowns permitting.  It’s a bold operation, and a brave one, and the producers know their audience: let’s hope their gamble works.