Mythic
Charing Cross Theatre
8th October 2018
3 Stars
Book Now
Here we go: another new musical; another interesting and engaging score; and another dodgy book.
What is it with these new shows?  How is it that they are often – indeed, usually – so robust when it comes to the score, but yet so wobbly when it is a question of the dramatic integrity of the work?  I am still trying to fathom that one out.
In this, a world premiere British launch of a new work written by writers imported from Broadway, we get a likable clutch of tunes, with more hooks than an entire riverbank of fishermen, all concocted by the Broadway arranger and orchestrator, as well composer in his own right, Oran Eldor.  Eldor is also a composition fellow at our own Royal Opera House, so there is some British connection there.  His work is nothing if not energetic: no chance here of the show getting bogged down in too many ballads.  If anything, though, we could all do with a bit of a chance to draw breath now and then: that might bring some useful shade into the blazing light of his demandingly insistent rhythms.
As for melodic inventiveness, well I cannot remember a single number, apart from recalling that they were all pleasant to listen to.  The lyrics of Marcus Stevens (also from the States), however, while certainly functional, lucid and clear as a bell, struggle even harder to make any lasting impression.  Stevens comes with his own very respectable credentials, and as an actor he has worked in, amongst other things, two seasons of ‘Forbidden Broadway’: that experience alone should have taught him powerful lessons about how to write a memorable lyric, not to say a funny one.  Yet moments of significance or humour are few and far between in this rather po-faced tale of a stroppy teenager and her hippy’ish, dysfunctional parents.
Ah, yes: the book.  What we have here, as Sheridan Morley always used to say, is yet another riff on the myth (see title, above) of Persephone and Hades.  Quite why the earth needs one more re-hashing of this well-worn yarn I really cannot imagine, nor, sadly, does Stevens give us any clues as to why he chose this particular frame upon which to hang the new clothes of his and Oram’s songs.  So, slightly nonplussed, we sit and listen in, again, on the ancient Greek legend of how winter was invented.
With so little to go on in terms of motivation, or raison d’etre, it is little wonder that the cast seem every bit at sea as the audience.  Behind the relentless energy of their high-octane production (director-choreographer, Sarah O’Gleby, another US import, throwing everything at it in a desperate attempt to distract us from the cavernous holes in the dramaturgy), there are twelve very hard-working young people on stage here, trying to make a great show of it all.  They are, as they say, ‘doing’ this gig! 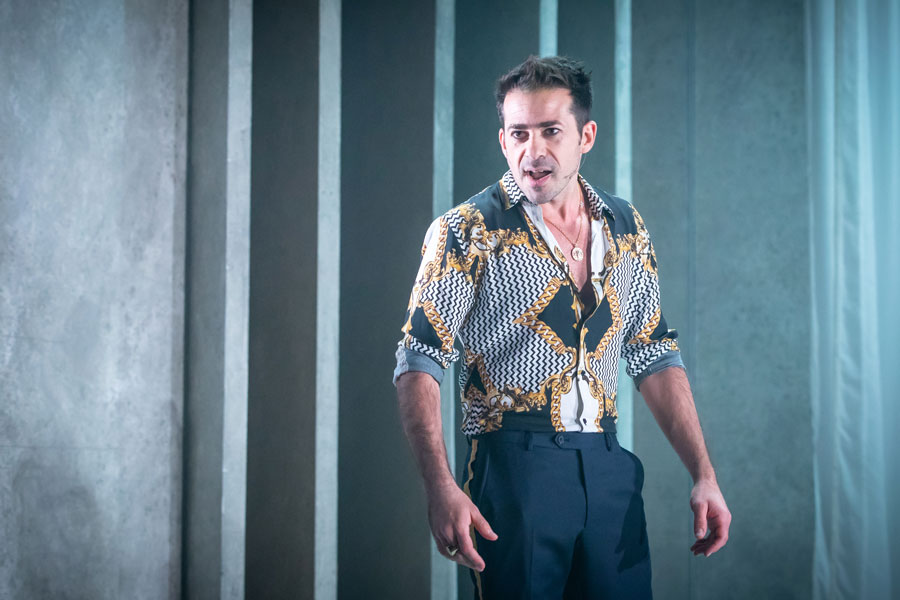 Outstanding amongst them is, in my book, Daniella Bowen’s ravishing (in a fabulous Seventies Greek revival frock by designer Lee Newby) Demeter.  Her splendid voice – strong throughout the range, with some especially heart-felt middle and lower register notes – is the best match for Oram’s musical lines, and her phrasing of Stevens’ lyrics is frankly peerless: her early solo, ‘Sweet Summer Days’, is the strongest contender for a truly memorable number.  She is the production’s strongest asset.  As her daughter, the wayward stroppy teen, Persephone, Georgie Westall has a difficult job to do: she is asked to sing, more or less in strict succession, three numbers that are virtually identical, melodically, harmonically, structurally, dramatically; that would tax even the most experienced of actresses, and she has to be admired for her fearless approach to tackling them; however, with material as predictable as that, it is hard for her to establish any sense of movement or development in her character.  That’s unfair on her: she puts abundant energy into trying to solve the insoluble problems of her role.
Her love interest is provided by the stunning West End debut of new talent Michael Mather, who is clearly going to do well from this discovery by this enterprising house (think of all the great new talent we have seen here recently, people).  His voice is warm and round and convincing, and his stage presence speaks of great potential for baritone and/or low tenor/high bass roles (depending on how that voice grows).  The script gives him less to do, but he makes the most of every moment.  A male character known to us from previous performances (his turn as Trumper in the Union’s now legendary production of ‘Chess’ was simply electrifying) is the slightly under-used Tim Oxbrow as lazy dad, Zeus (someone asks, ‘Are you her father?’, he responds, after a pause… ‘Probably….’). 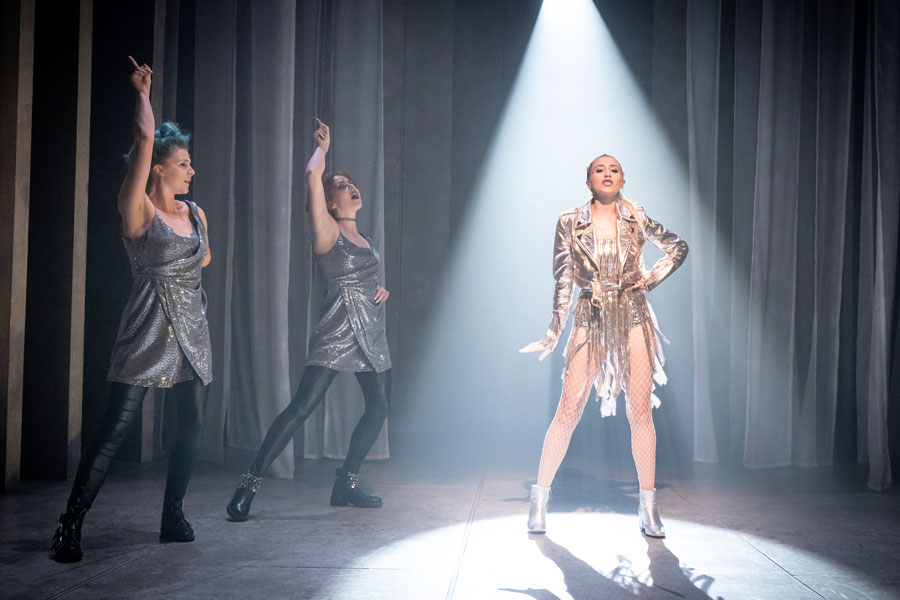 There is a zesty, louche colloquialism about the dialogue which is encouraging: Stevens certainly has talent.  So does Eldor.  What they need more of is skill, and a surer foot when it comes to knowing what they’re about, and why.  Meanwhile, we get a fun turn from Genevieve McCarthy’s very ‘Christina’ Aphrodite (in a gorgeously hideous get-up by the appealing Newby).  The rest of the ensemble do their finest with their many appearances: Courtney-Brogan Smalley, Eloise Davies, Ben Lancaster, Jade Marvin, Jamie Ross, Leon Sene and Ben Welch all give great value for money: it’s a fine place for them to show off their talents.  But, somehow, I don’t think many of them will retain anything of the score in their rep folders.  Their numbers, while jaunty and catchy (for as long as you actually are listening to them), just don’t ‘land’ in the memory.
Newby also does a fine job of improvising a dynamic set with the Charing Cross’ famous lack of wing or fly space.  Jamie Platt lights it with comparable high-energy intensity, and Andrew Johnson makes sure we hear (most of) the score.  The orchestrations, by Eldor himself, are sometimes overwhelming, even in full-throttle ensemble numbers.  All in all, it’s not a bad show, and possibly it will lead to better things.  If you’re curious, go; just don’t expect too much.