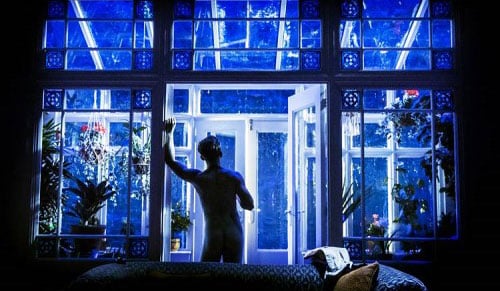 My, what a difference a transfer makes!

When Robert Hastie’s revival of Kevin Elyot’s 1994 play, My Night With Reg, played in the intimate space at the Donmar Warehouse, it was a remarkable night at the theatre: Read our review here.

At the Apollo Theatre, where that production has transferred and now opened, alas, much has been lost in translation.

Curiously, and perhaps most guilty for the differences, Peter McKintosh’s set has not been redesigned or even readjusted for the new space; or at least, so it seems. At the Donmar, one felt one was actually in Guy’s living room and conservatory – everything was real, close, uncomfortably inclusive in parts, but necessarily so.

But it appears the set has simply been plonked down on the Apollo’s proscenium arch, albeit with some pretty blue flats encasing it. The result is two-fold: firstly, there is no longer a sense of intimacy at all; indeed, it seems more voyeuristic now than intimate. Secondly, the actors seem determined (perhaps by design, perhaps by error) to play to the back of the Dress Circle rather than to each other, solidly in the moment their characters are experiencing. Again, this shatters the sense of intimacy.

Quite simply, Hastie should have re-blocked the piece on a purpose-built, or at least purpose-amended set. Something that works by relying upon the proximity and complicity of the audience can’t work without adjustment in a bigger house with a proscenium arch. It is that simple. The Apollo is an adaptable space as the transfers of the Globe’s productions of Twelfth Night and Richard III so clearly demonstrated.

The other problem is more insidious. Some of the performances are deliberately bigger, determinedly more overtly comic, and less confrontational than they were at the Donmar. This lessens the dramatic sense of the play in unsatisfactory ways, while ostensibly appealing, presumably, to the expected middle class audiences in the West End.

But why transfer a production which really works if only to dilute the very qualities which make it ripe for transfer, make it worthy of being seen by a larger audience?

That said, there is still much to admire and enjoy here. Some of the acting remains first-rate and the inherent power of the writing, while diminished, is far from lost.

Lewis Reeves, Richard Cant and Matt Bardock are even better than they were at the Donmar; each more assured, more relaxed, more entirely inside the skin of their very different characters.

Reeves continues to astonish; the detail of his performance is complex and fascinating to watch. He is constantly alert, watching the others, sizing them up, wondering if he wants to belong and then belonging; all the time displaying a conscious shift in attitude about love which sets him slightly apart. His Eric likes sex but prefers love and commitment.

Reeves has several key scenes upon which the play turns, one of which has him almost silent, just painting and watching and being admired. While he pulls that off effortlessly (or so it seems anyway) he is particularly sensational in his key scenes with Guy and John. Beguiling and mischievous, but full of hope and aspirations, Reeves’ Eric is the revelation here.

As before, the duo of bickering Benny and Bernie is perfectly judged by Cant and Bardock. Cant is a delight as the chattering Bernie who “redefines boring”. But the tears in his eyes are genuine when he speaks honestly of the fear in which he lives and the proclivities of his partner, Benny, which dismay and shatter him. The sense of frustrated uncomprehending loneliness he exudes is crystal clear. Bardock is the quintessential geezer, endlessly smoking, and restless to ensure his prodigious member is constantly appreciated and shared around. Together, they are quite wonderful.

Geoffrey Streatfield is just as delightful as the outrageously camp and ultimately devastated Daniel as he was at the Donmar. He embraces the extremity of the character’s feelings, emotions and speech with relish; at times he makes Mr Humphries from Are You Being Served seem reserved. But this is precisely what the role demands and it helps make the passages of true anguish all that more affecting.

But Streatfield does not have quite the same support from Julian Ovenden’s Daniel and Jonathan Broadbent’s Guy as he did at the Donmar and this may, unfairly, make his performance seem slightly overbearing.

Unaccountably, Ovenden seems quite ill at ease and playing to the Circle does not assist his performance. The assured ease that characterised his John previously is gone; instead, he is prickly, garrulous and unlikeable. It is mystifying. Ovenden still finds many of the comic marks, but the deep sense of reality that permeated his performance previously is gone, replaced by a brassy showiness which, defensible as a choice perhaps, is not nearly as effective either for his character or the way his character relates to and with the others.

And Broadbent’s Guy has morphed, almost unrecognisably, into a kind of fusion between Charles Hawtrey and Peter Butterworth. There is far too much swishing (this was an oddity before, now it seems an artform), eye rolling and gurning, when the part really requires a through-line of genial pain. This seems to stem from a directorial decision to play harder ball for comedy – but it is counter-productive.

The real comedy in Elyot’s play comes from the truth of the characters and the reality of their friendships and secrets and lies. This is not a Carry On Gang film.

The whole proceeding seems to have moved further into silly comedy mode and away from the very thing which made it so important and captivating at the Donmar: its aching intensity and brutal honesty. Quite why Hastie has permitted this is unclear.

Still, these concerns only arise if one had seen the Donmar version and enjoyed the heights there ascended. In the Apollo, the play still has charm and power, and in Reeves, Cant, Bardock and Streatfield a quartet of powerful and luscious performances.

Book a ticket to My Night With Reg Now