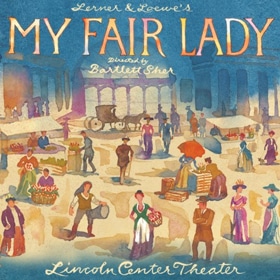 Bartlett Sher and his formidable team at Lincoln Centre have staged some incredible revivals of classic musicals over the past years including South Pacific and The King and I, which is now wowing crowds at the London Palladium. This production of My Fair Lady is the third such revival and it makes for a very interesting listen.

Ask many Broadway lovers and you’ll find that My Fair Lady by Lerner and Loewe is considered to be one of those superbly written efforts from Broadway’s Golden Age and I think they’d be right. Based on George Bernard Shaw’s Pygmallion, it’s the ultimate story of Cinderella going to the ball.

Looking at this recording from the ground up, Musical Director Ted Sperling conducts the stunning 29 piece orchestra playing Robert Russell Bennett and Philip J Lang’s original orchestrations. Never over-bearing, this orchestration and the orchestra that play them are almost a character in their own right. When you listen to the depth and texture provided by Ted Sperling’s orchestra playing these orchestrations, you realise just how much is lost by the reduction in the size of Broadway show orchestras especially when it comes to classics like this.

The cast of this revival is led by Britain’s own Harry Hadden-Paton as Henry Higgins. Rather than adopting the speak-singing style adopted by the role’s originator, Hadden-Paton endeavours to put the musicality back into Higgins and he largely succeeds. This is a younger Higgins than we are perhaps used to, but on an audio level at least it makes for an interesting contrast with his Eliza and certainly at times puts a bit of a spark into the proceedings. It’s a performance that is less bombastic that previous portrayals of Higgins tending towards diction rather than domination of Eliza at least. Britain’s Allan Corduner does a sterling job as Pickering and is well balanced against Haddon-Paton in numbers like You Did It.

Lauren Ambroze plays Eliza Doolittle on this revival recording. Playing Eliza is a double edged sword. From Cockney Girl to society lady it’s an incredible transformation that can catch the best of actresses in diction and accent hell. I’d like to hear Ambrose now after she’s had a chance to relax into the role. There are times when you just feel that Ambrose is trying a bit too hard. Her Wouldn’t It Be Loverly is ‘Cockney light’ which makes the vocal tranformationon this recording far less dramatic. That said her I Could Have Danced All Night is a delight, full of joy and backed by a gorgeous string section (complete with harp!) it’s a highlight of this album. Show Me and Without You are likewise beautifully recorded.

Norbert Leo Butz’s Alfred P Doolittle is an interesting concoction. Never-the-less Get Me To The Church On Time and With A Little Bit Of Luck are a delight. You can hear the joy in Norbert’s vocal.

Jordan Donnica plays lovesick suitor Freddy Einsford Hill.  On The Street Where You Live is the song that was almost disguarded during the out of town tryouts of the original Broadway run, I just can’t imagine this score without it and Donica bats it out of the ballpark.

The ensemble on this recording is stunning throughout The Rain In Spain servants introduction and the Ascot Gavotte are both quite wonderful.

There is little doubt in my mind how My Fair Lady was able to achieve it’s original run of 2717 performances on Broadway and how it remains on of those shows which constantly enjoys revivals. This recording produced by David Lai and Ted Sperling has reminded me in droves just how much I love My Fair Lady.  A sumptuous, glorious feast to the ears that I have enjoyed coming back to.

BUY A COPY OF THE MY FAIR LADY CAST ALBUM