Mark Ludmon reviews Frances Barber in Musik by Jonathan Harvey and The Pet Shop Boys presented at Assembly Rooms Edinburgh prior to a season at the Leicester Square Theatre. 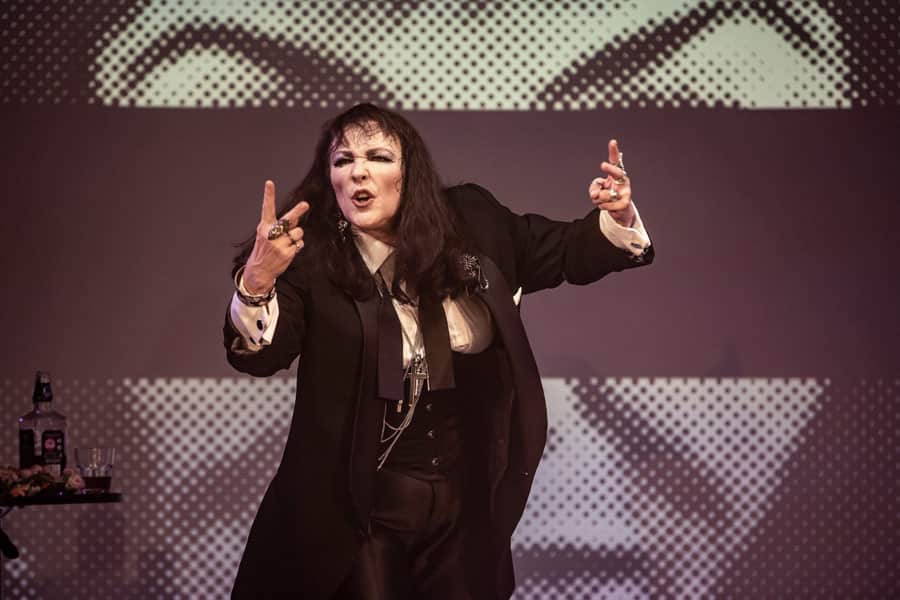 It is 18 years since Billie Trix burst onto the stage in the Pet Shop Boys’ West End musical, Closer to Heaven. The rock icon, artist and avant-garde actress is now back, just as camp and just as fabulous, in new solo show Musik, with Frances Barber gloriously reprising the role she created back in 2001.

Now 74, Billie still shines bright, defying age and mortality by continuing to embrace every experience that life throws at her. With Jonathan Harvey returning as writer, she gives us her colourful life story from her birth in Communist East Berlin in 1945 through adventures in New York, Vienna, Vietnam, Paris and London. Directed by Josh Seymour, it is witty, sometimes silly and often filthy, with Billie firing out her barbs and repartee with style and panache between lines of coke and swigs of Jack Daniel’s. Not every joke hits the mark but there is more than enough that does. Drawing on photo archives and artwork, her story is illustrated with a colourful backdrop of video designed by Milk. Even her figure-hugging black-and-white costume is a celebration of her rockstar life, designed by Lee Newby, with a hat by Stephen Jones Millinery. 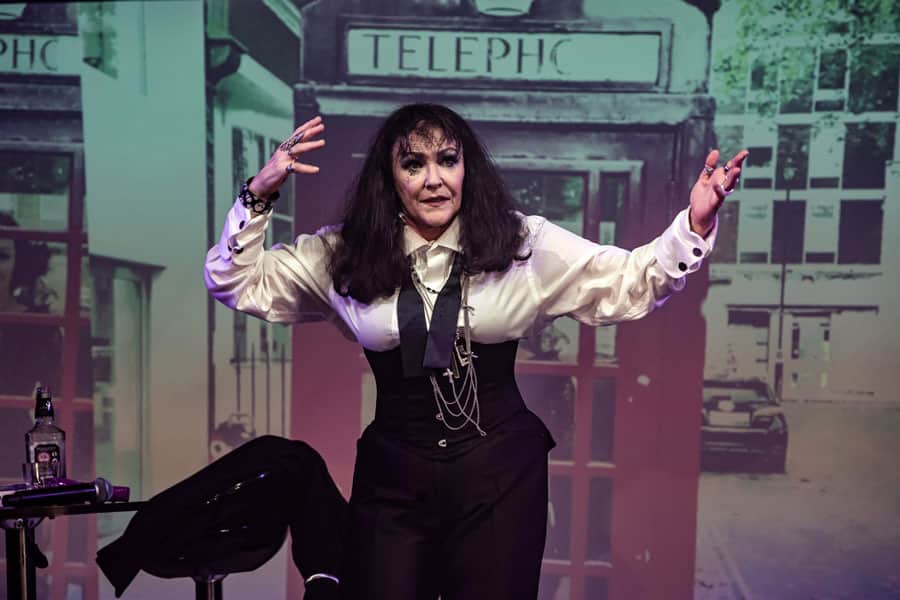 Billie name drops with every breath. A muse to Andy Warhol, Jackson Pollock and Damian Hirst, she casually chats about partying with the likes of the Beatles, Mick Jagger and Frank Zappa. In between, she sings some of her hits that are a journey through the history of post-war rock and pop. After the doleful opening number, Mongrel, about her loveless upbringing, we have a joyous and wonderfully surreal celebration of soup which “won’t let you down”, tying in with her providing the inspiration to Warhol for his most famous piece of art. Run, Girl, Run is pitched as a protest song against the Vietnam War inspired by the iconic 1972 photograph of a nine-year-old girl hit by napalm, which fits uneasily in a show that is mainly for laughs. We are in more comfortable territory with the pastiche of Euro disco, Ich Bin Musik, where Barber shimmies beneath a glitter ball.

Fans of the original show will recognise Billie’s biographical showstopper, Friendly Fire, reminding us how she is someone who it is impossible to ignore. Allusions to Closer to Heaven pepper the show but it is not necessary to know or recognise them. The show closes on a new number that sums up what Billie, and Musik, is all about: survival, always looking ahead, and living “your life for every moment”. This is a fun and life-affirming return for a character who was always too big for the musical that gave birth to her.