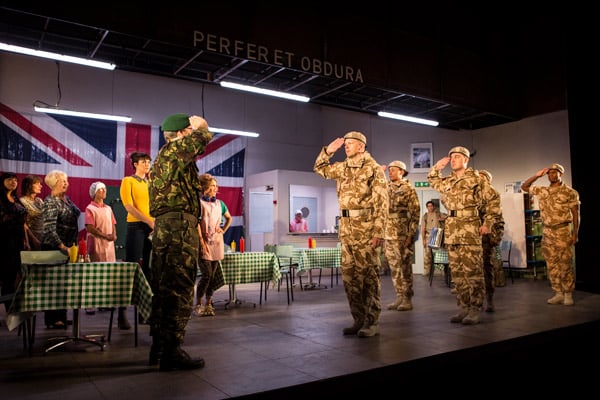 Much Ado About Nothing
Mercury Theatre, Colchester
5/10/16
2 Stars
Book Tickets

The Only Way is Shakespeare? Staged in contemporary Essex in a garrison town, (not very subtly hinting that it takes place in Colchester), this production manages to misfire on just about every level. The TOWIE approach introduces some tacky ideas, and Pia Furtado’s misconceived concept needs to stop wallowing in its perceived cleverness and focus on telling the story. It all begins with the opening song being sung in the aisles, behind the first few rows who cannot see the singers, which goes on for too long. This spinning out of ideas slows the pace and adds to the running time; for example, a desperately overlong party scene destroys the comedy, with some hideous upstaging that needs to be stamped on, and why do one crotch gag when ten will do? (If the cast are having more fun than the audience, we have a problem.) At nearly three hours long, the show needs to march at a quicker pace. Whilst I applaud innovation, this interpretation sheds no new light on the text, and underneath it all, this is a workmanlike rendition of the play. 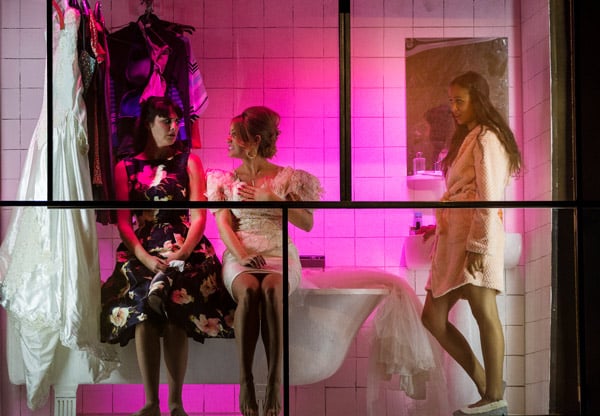 Huge sigh of relief than that Beatrice and Benedick, of whom the show depends on entirely, are good. Jason Langley is a great, laddish, Benedick, perhaps needing to bring out his bravado at the play’s beginning a little more, but he is exactly the kind of Essex boy that packs out the local Wetherspoons on a Saturday night, hugely likeable when he admits his love for Beatrice. Danielle Flett’s Essex accent reminded me of Catherine Tate’s stab at the role a few years ago, but once she gets into her stride, her Beatrice is a feisty and convincing and the pairing works particularly well in the second half. Robert Fitch is an excellent Don Pedro, authoritative when needed to be, a friend when called upon to be, and with lovely hints at his own loneliness and lovelorn existence. As Margaret, Kirsty J. Curtis is energetic and funny, and it’s good to see her character given room to grieve over Hero. 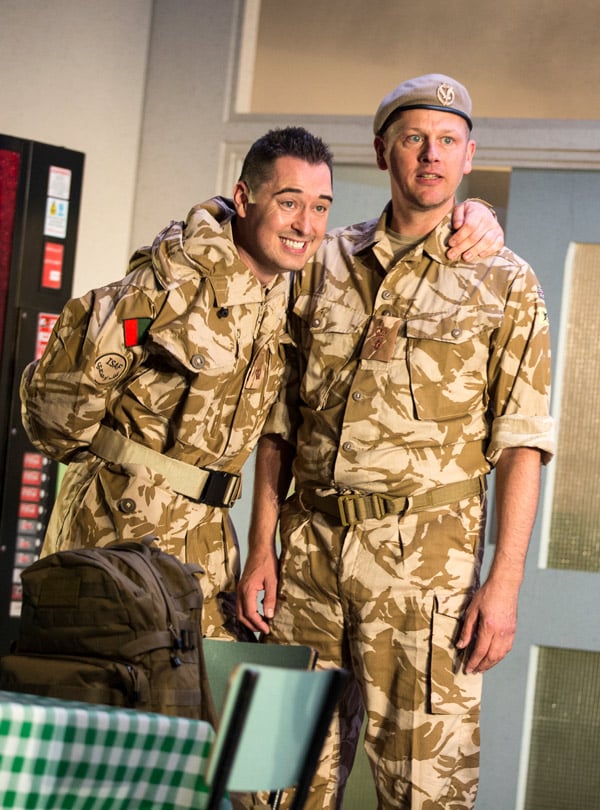 The cast are equally committed and undermined by the concept. Polly Lister as Don John cuts through the frivolity and, with excellent diction, portrays the nastiness of the character well. However, having the baddie being portrayed as a female soldier, and with Conrade, one of her gang, also being female, raises the stereotype that female soldiers are bitches- there needed to be a strong female equivalent to balance it out. Having Dogberry as a former soldier suffering from PTSD is a brave and fascinating concept, yet it sucks the comedy out of the part, despite Karl Hayne’s strong performance. The rest of the Watch are played by members of the community chorus, and they hold their own well, especially as some of the professional actors tripped over lines on press night. Sad to say, the acting is a little patchy among the ensemble. 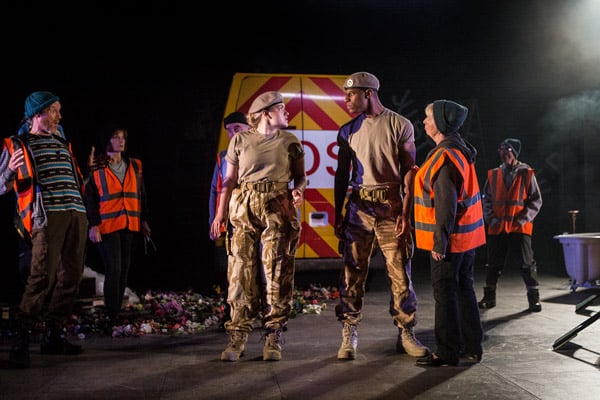 Things aren’t helped by Camilla Clarke’s dismal set, which confines the show to company barracks in the first half, never freeing the play into an enjoyable playground. Things don’t improve in the second half, when the action leaves barracks, and the set certainly isn’t a Colchester I know. The only recognisable feature is the SOS bus that offers a respite to drunks in the town centre over the weekend- there is no reflection of the Roman walls, or any of the historic churches which could have housed Hero following her jilting. For me, Much Ado is a romantic comedy: in fact an article in the programme highlights this. Yet this production is neither-  what the play is not  is a dark comedy, and so much fun has been taken away from the text. Ironically, because the comedy falls flat, the more sombre aspects of the play work far more successfully.  It pains me to say it, but, in my opinion, this is one of the weakest shows staged at the Mercury in recent times. I stress that it is my opinion though, as some other critics and audience members loved it, and perhaps this version was always going to be divisive. It has certainly got people talking, which may be a strong enough incentive to go and see it and draw your own conclusions!

BOOK TICKETS TO MUCH ADO ABOUT NOTHING