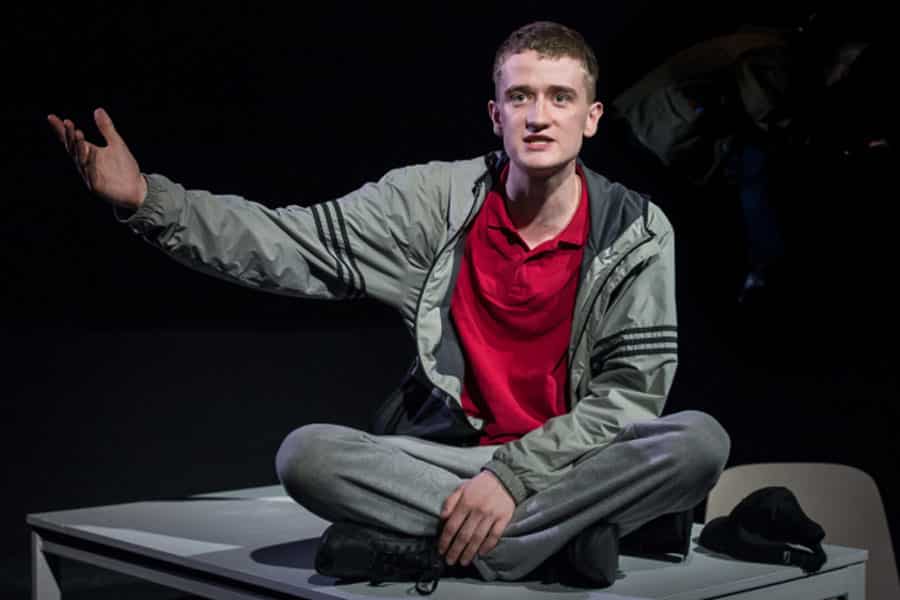 After a hugely successful run at the Traverse last autumn and at the Soho Theatre earlier this year, Kieran Hurley’s extraordinary play returns for the Fringe and is one of the most visceral, emotional and totally involving theatrical experiences I have had.

Salisbury Crags, a middle-aged woman steps forward to fall to her death, but she is saved by a teenage boy. From that moment Libby and Declan form a friendship, fragile at first, but growing as Declan begins to trust her, and he begins to experience art and glimpses of another life. Libby is a failed writer, and she spots an opportunity in the despair and chaos of Declan’s life, she begins to appropriate his story and her star begins to rise as his life falls apart.

The genius of Hurley’s script is that it follows a tight dramatic structure while destroying one dramatic convention after another. Libby reads from playwriting manuals as we watch the play unfold, her stage directions are projected on the wall, the action occurs as she writes it until Declan begins to fight for ownership over his own story and life. The acting is outstanding. As Libby, Shauna McDonald is passionate about her writing when it returns, and totally convincing about the disappointments of her life- her rant about theatres not seeing older playwrights struck a chord with me! But Hurley never draws her in two-dimensional terms, much as she is misguided, MacDonald exposes every layer of vulnerability. And Angus Taylor is a tour de force as Declan, heartbreaking, shimmering with rage and despair, a vulnerable child who has a glimpse of an opportunity taken away from him. They may just be the best performances at this festival.

Orla O’Loughlin’s pinpoint direction and Kai Fischer’s superb design keep the tension building, supported by Kim Moore’s sound and composition. Hurley’s metatheatre reveals so many different directions to smash the fourth wall, the penultimate scene takes place in the Traverse Theatre watching Mouthpiece. Here we are confronted with our poverty tourism and the media’s poverty porn. They could run this play every week for years and it would still be tragically relevant. Searing, emotional theatre that does what only theatre can do, it gives the audience a communal experience that blows your heart and mind. It’s returns only, but join the returns queue as the wonderful box office staff will do their best. Extraordinary theatre.