Our very own theatreCat Libby Purves ventured out to see Sir Ian McKellen and John Bishop in Mother Goose the pantomime at the Duke of York’s Theatre, London.

THIS DAME HAS A WHOLE LOT BEHIND HIM

I last saw Sir Ian McKellen onstage as Lear, missed him as the oldest Hamlet ever, but far longer ago saw him in a frock at the Old Vic,  in Spacey’s day. On that occasion, it is reported that he and others had some trouble explaining to the American AD what a panto actually was. I remember that one as a bit sub-prime, trying too hard to be grownup and a bit heavy on the innuendo. This one on the other hand,  in which the great theatrical knight is actually going to tour, in his 80s, is absolutely perfect.

The pleasure of it is in the feeling that despite the topflight cast and the direction of Cal McCrystal,  peerless physical comedy guru,  it has the feeling of a local panto, even a community one. No big technical showpieces, but plenty of old-fashioned gags: puppets popping out of pans, a ‘self-raising flower’ swannee-whistling up from a table,  a custard pie scene and rapid costume changes. For the Dame himself,  one happens rather brilliantly behind ostrich feather fans, another when his oppo John Bishop as Vic Goose is transformed from a Grenadier Guard to a leather-babe (“that went down better in Brighton..”)

The jokes are well-worn too, with only a few nods to 2022 like the brief appearance without explanation of a blond slavering Boris-pig in the kitchen scene.  Though there is, for the London run, a humdingher of a Prince Andrew joke in the singalong.

McKellen’s Mother Goose and Bishop’s likeable Vic are accompanied by a gang of animals, monkey and penguin and tortoise and bear etc, and a nerdy Bat who kept reminding me of Michael Gove. The songs are jolly and familiar and never too long, and McKellen himself is a dream. Because he’s loving it; because he’s doing it for theatre nationwide, in hope; above all because his great range of expressions and reactions are as spot-on as you would expect. He also gives us the Quality of Mercy speech straight,  to the cruel if rather camp King of the Geese, with the proper shiver down the spine; but better watches visibly impressed as John Bishop, a mere standup, decides to do Sonnet 18 (Shall i compare thee..) rather beautifully.

And he puts up with the “Serena” gag. Of course. He’s a great old fabulous treasure, and traditional panto is a treasure too. For them to be touring together in this hard season for theatre is a kind of triumph. 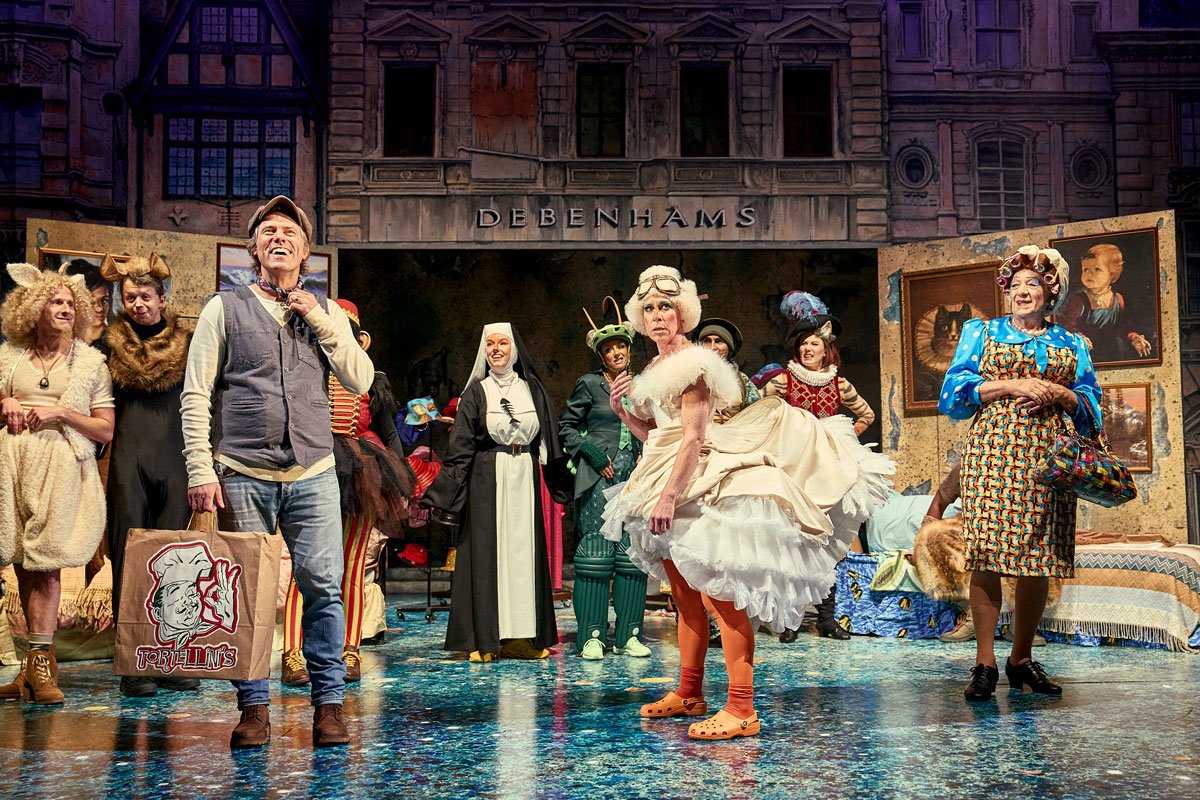