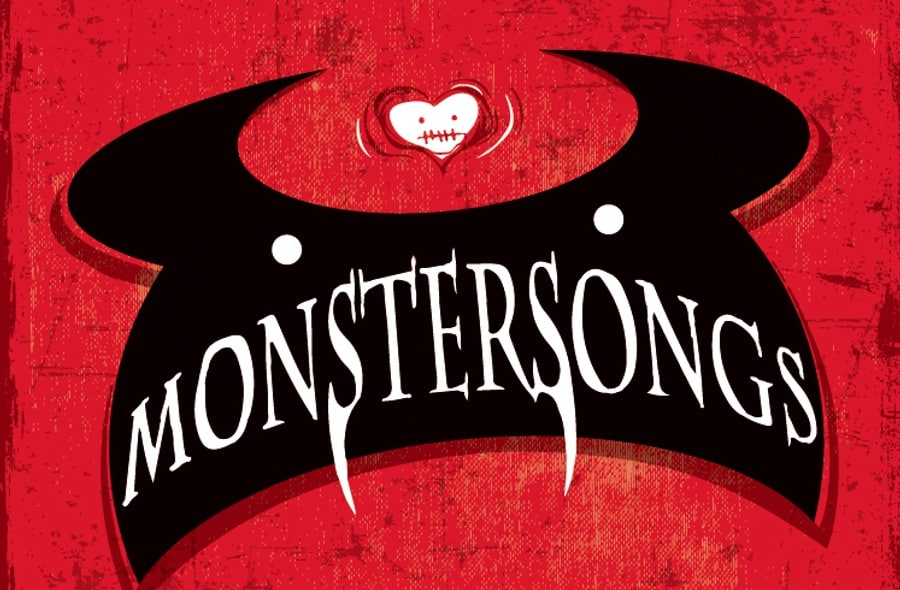 Rob Rokicki may not be a songwriter who is widely known in this country, but he should be.  For a couple of performances this week, we got to see and hear a concert presentation of this American artist’s latest work: a 12-title song-cycle based on well known villains from myths, fairy-tales and horror stories, each one exploring a different epoch, attitude, and musical style.  The mature distillation of many years’ creativity, and partly inspired by his collaboration with graphic artist David O’Neill, whose images fill up a handsome presentation volume – which also houses the CD of the musical numbers – and which were also projected onto the wall of the studio for this evening’s sell-out audience, this is one of the strongest new scores we have heard in a while, with so much to enjoy.

And enjoy we did.  Rokicki was here working with an excellent director, Ryan Watson, and the brilliantly promising young producer, Densie Koch, whose vision and enterprise had really made the whole thing happen.  Together, they assembled an ace team to perform these terrific new songs.  Rokicki himself, a fine performer, directed from the piano, supported by the superb rock line-up of Amy Davis, beautifully lyrical on violin, Connor Arnold and John Caddick, giving the stadium quality guitars, and Gareth Thompson laying down some mean beats on percussion.

Rising stars of the West End, Tyrone Huntley and Cleopatra Higgins led the opening ensemble, ‘Monsterbaby’, a grungey, pounding curtain-raiser, perfectly setting the bracing but dark tone, with its Frankenstein-like refrain, ‘We made a monster, baby’.  Rokicki uses words with astonishing accuracy and wit, sparingly setting up his verbal effects with remarkable discipline and confidence: there aren’t that many lyricists of whom this can be said.  Rather like Oscar Hammerstein II before him, what may on the printed page of the book seem somewhat plain, when coupled with his music suddenly becomes dazzlingly memorable and trenchant.  Furthermore, his sense of pacing is faultless: every song tells a complete story, but nothing ever overstays its welcome.

His take on ‘The Mummy’ (one of those schlock franchises that just won’t go away) was an animated spoof: ‘Unravel’ had Rokicki himself making broad comic use of the wordplay in the title, mixing an emotional state with the grotesquerie of the ghoul’s linen wraps falling away.  This canny combination of humour and intellect is typical of his insight: we are amused by his situations at the same time as feeling sympathy for their characters.

Nothing could have made a more powerful contrast than the terrifying ‘Say Goodbye’, from Sinead Wall’s exemplary femme-fatale of Medusa, using the story of the woman whose gaze could turn men to stone.   Wall keeps getting better and better and this performance was positively divine: she finds an endlessly subtle and sensitive variety of tones to explore in the song, revealing the most interior of thoughts and the grandest of dramatic gestures, always organically, never letting you anticipate where she’s going next.

Wonderfully different was the world conjoured up by ‘Down and Under’, a flippant double-act for Huntley and the merely 16-year-old Bradley Riches, as a pair of trolls up to no good.  Riches is one to watch, because he more than held his own on a platform filled with much more established acts.  And Rokicki’s seductive harmonic inventiveness always kept you on their side, with Huntley deliciously in tune with every passing inflection or shade of meaning.

Amanda Flynn took centre stage next with Wall in a grim tale for two zombies, ‘Blood and Brains’: a joyous antiphonal girl duet, mixing 50s rock’n’roll with a 60s twist.  Utterly irresistible!  Then, the young and phenomenally talented George Damms blasted us all with his ‘Les mis’-inspired narration, filtered through the back catalogue of Bon Jovi perhaps: ‘The Plans’, telling us the story of the making of Baron Frankenstein’s creature from the point of view of Igor.

Then we got a full measure of Higgins socking it to us with ‘Right Through You’, another witty take on a well-worn trope: this time, the ghost.  And, she got to move from a haunting slow number into a startlingly lively upbeat closing section (‘I’ve got nothing but time’), which really put on display her stunning rock star chops, powerfully physical and emotionally thrilling.

Riches came back with some cool West Coast rock – merged with ‘Malcolm in the Middle’?) in ‘Reluctantly’, the story of a dragon.  And then Damms flipped that coin right over to chill us to the bone with his terrifying ‘I’m Sorry’, another title that could be read in a number of ways, a confession of a doppelganger, with Damms singing in his ‘English’ voice, starting with light acoustic guitar accompaniment, and seguing into some vibrant thrash rock.

Sweeping that aside was Flynn’s second number, ‘Hell Hath No Fury’, as a witch straight out of an Angela Carter re-write of children’s literature.  And then we got ‘Footprints’ (co-written with Joe Iconis), with Huntley’s Yeti and Rokicki’s Sasquatch in duet in a remarkable Nick Cave-meets-Eagles fusion of melancholia and glamour, with the refrain, ‘Two lost souls’ (geddit?).  In the sadness, there is always a playful, wry half-smile playing about Rokicki’s lips.

The whole company regrouped for the well proportioned grand finale: ‘It’s Over/The Return of Monsterbaby’ is a Jonathan Larson-esque, many-layered anthem, with pizzazz and more than a touch of philosophy, that carried the hearts of the audience along with it to a splendid conclusion.  It is difficult to guess where this show might be going next: song cycles over here are always a tricky sell, even with well-known names behind them.  So, who can say what might be done with this next.  We will wait.  And we will see.

FIND OUT MORE ABOUT MONSTERSONGS