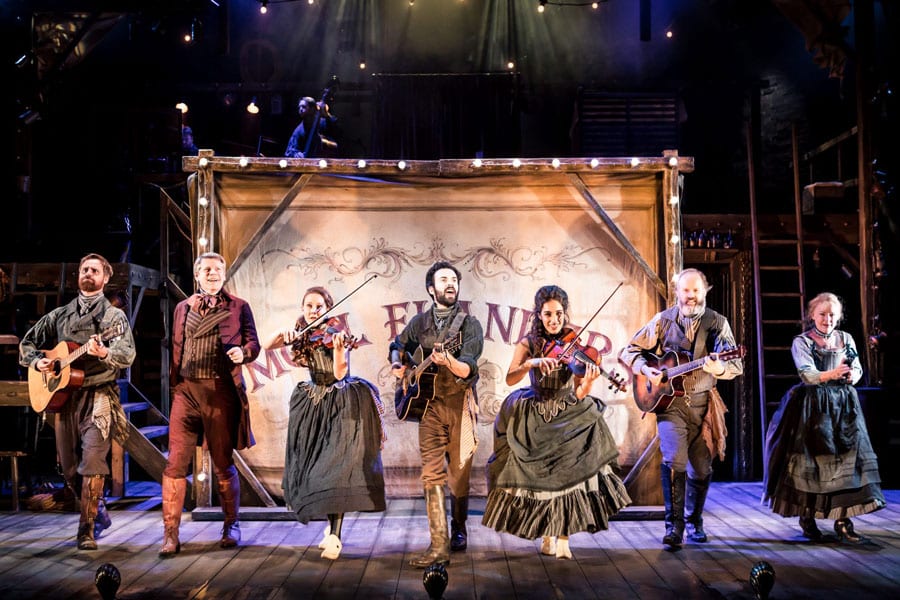 Director Ryan McBryde scored a huge hit at the Mercury this year with the new British musical Pieces of String, which won composer Gus Gowland a Stage Debut award a few weeks ago. His immense skills as a director are again on show here, creating a fast moving, lively  version of Daniel Defoe’s classic novel, given an “unfaithful” adaptation by Nick Perry. It was probably too much to hope for that it would hit the perfect highs of Pieces of String, but this is, nevertheless, a highly enjoyable evening performed by a hugely talented cast. 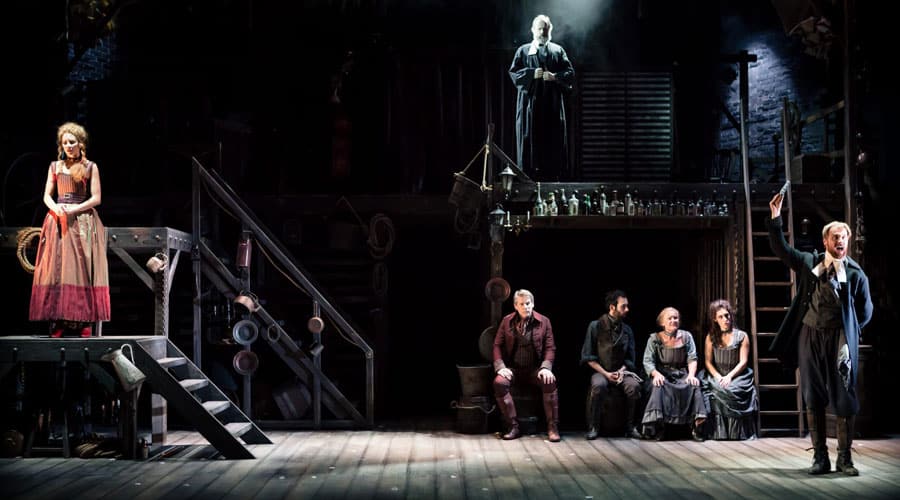 Defoe is struggling to follow up the success of Robinson Crusoe when he stumbles across the inspiration for his story of Moll Flanders, born into poverty, abandoned by her parents, brought up in an orphanage in Colchester, (giving  a lovely local feel to the story), much married, thief, prostitute, bigamist, and a woman who, accidentally, marries her brother. The narrative is given strong shape, and the story told with utter clarity, so no prior knowledge of Moll’s tale is necessary. The first huge applause must go to designer Gabriella Slade, who has created one of the best sets I have seen at the Mercury, functional and allowing for multiple locations and excellent flow, complimented by superb costumes, lighting and sound. It’s the perfect playground for the outstanding cast to play on. 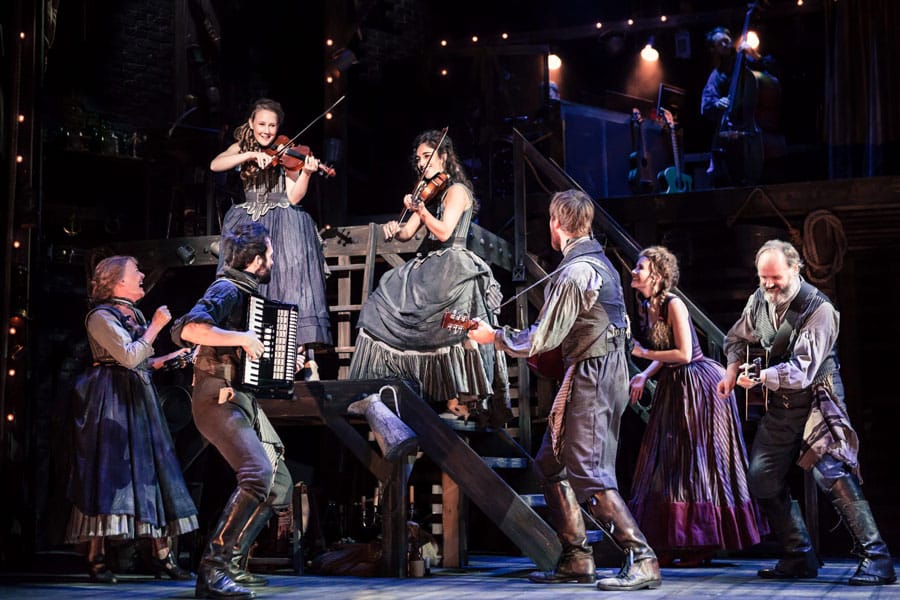 Eva-Jane Willis is excellent as Moll, bawdy and lewd when necessary, but also very good at underlining Moll’s vulnerability, especially as she becomes the kind of thief she despises, her self- loathing is beautifully expressed.  As Defoe, Bill Champion is a hugely effective narrator, engaging the audience throughout, with wry observations about her story, and the nature of writing and creativity, puncturing the fourth wall with charm. The ensemble are terrific, playing a cast of motley characters with ease, Annie Wensak is particularly fine in a variety of “Mother” roles, from sweet Nurse to the sinister Mother Midnight. Mark Peachey shines in a variety of roles, Dan Bottomley is hugely energetic, especially as highway man Jemmy, and all of the cast seem to pick up any instrument and play them with ease, and the singing is stunning, especially in the deep South gospel numbers. 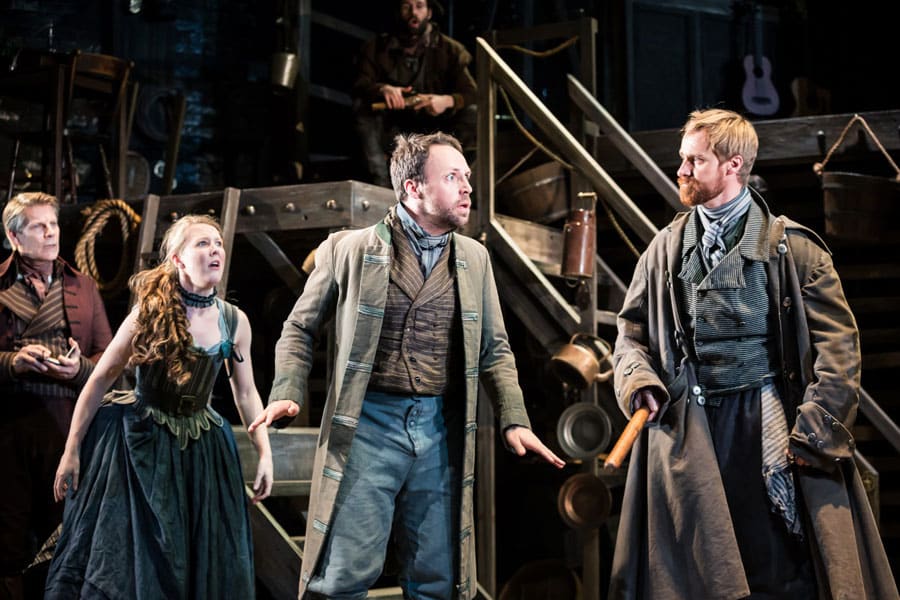 And, for me, there is the weakness of the production- the musical numbers. Since Hamilton shook up the musical theatre world with its mix of contemporary music and history, new musicals have adopted this rock opera style more fully. (Six explores the lives of the six wives of Henry VIII, but does it as a girl band, Little Six (?), and Wasted adopts the same approach to the Bronte sisters.) Here, Moll Flanders has one foot in a more traditional musical style, and one in the more rock, modern style, hence you will hear numbers such as We Are Family, Fever and aforementioned Gospel. For me, it falls between the two stools, and a stronger step either way would have really brought the show forward and into focus. It uses modern slang and parlance, and I wanted it to fully embrace the rock opera and steam punk style. It’s a bawdy, saucy romp too, which I love, but occasionally, especially in the first half, this does border on pantomime, and there’s a theme about mothers and mothering that could have been given more poignancy. 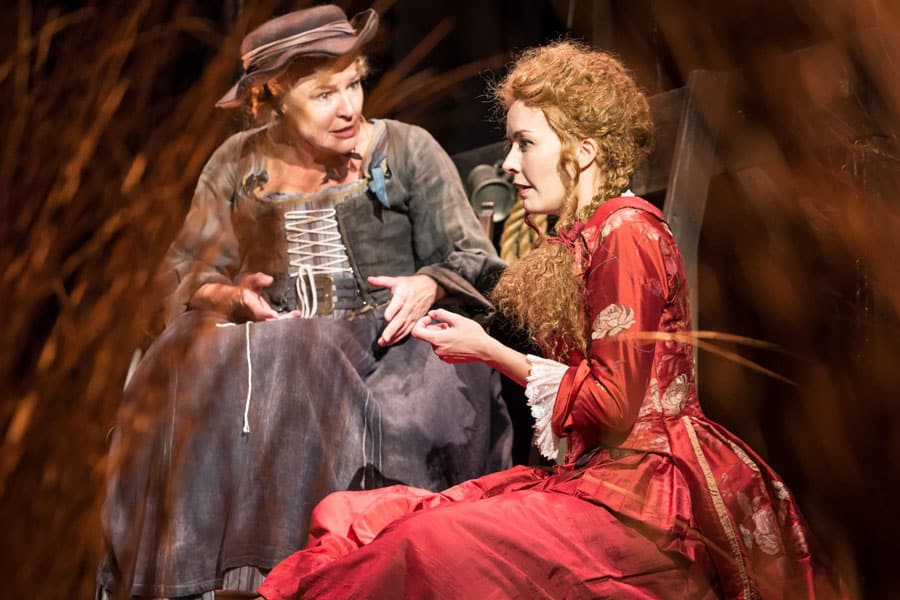 That said, the company work so well together that the evening flies by and this is an enjoyable romp, and, as it runs in, this will no doubt become a major audience pleaser. It’s well worth taking the epic journey with this Moll, and hats off to the Mercury for another piece of bold programming.