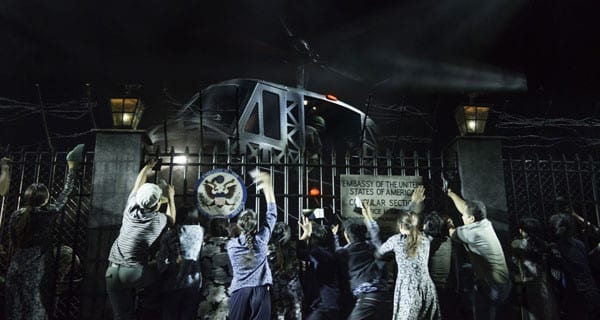 This incarnation of Miss Saigon has much to recommend it. By making the staging and design claustrophobic in the Dreamland sequences and Saigon street scenes, Director Laurence Connor and Designers Totie Driver and Matt Kinley have focused the doomed love story of Chris & Kim bringing most of the staging as close to the audience as possible.

As Kim, Eva Noblezada delivers a performance that is nothing short of incredible. Her range and emotional depth is astonishing. Alistair Brammer as Chris, is a hometown young American guy lost in the turmoil of Vietnam. His emotional attachment to Kim, a salvation against the chaos around him. Brammer’s rendering of Why God Why? re-enforces it’s standing as one of the great male musical theatre moments.

Jon Jon Briones takes on the role of the Engineer. This is nuanced performance from a small man with a personality that explodes onto the stage. He seems to channel Fagin and all manner of musical theatre charlatans simultaneously holding the audience in the palm of his hand throughout.

Technology developments in the 25 years since Miss Saigon first opened mean that moments like the famous helicopter evacuation of the US Embassy are even more spectacular here. Surround sound technology brings the helicopter into the auditorium and it was fun to watch audiences turn as the roar of the helicopter approached from behind them.

I still get the impression though that despite incredible theatrical moments like The American Dream and Bui Doi, Miss Saigon is on the verge of being overcome by angst. It’s a tricky balance which must be watched as this production heads into what looks like an incredibly long record-breaking run.

If anything, this production of Miss Saigon re-establishes Cameron Mackintosh as the greatest producer of musicals ever. He understands his audience, and as a producer and theatre owner, he delivers!

Miss Saigon is now running at the Prince Edward Theatre.