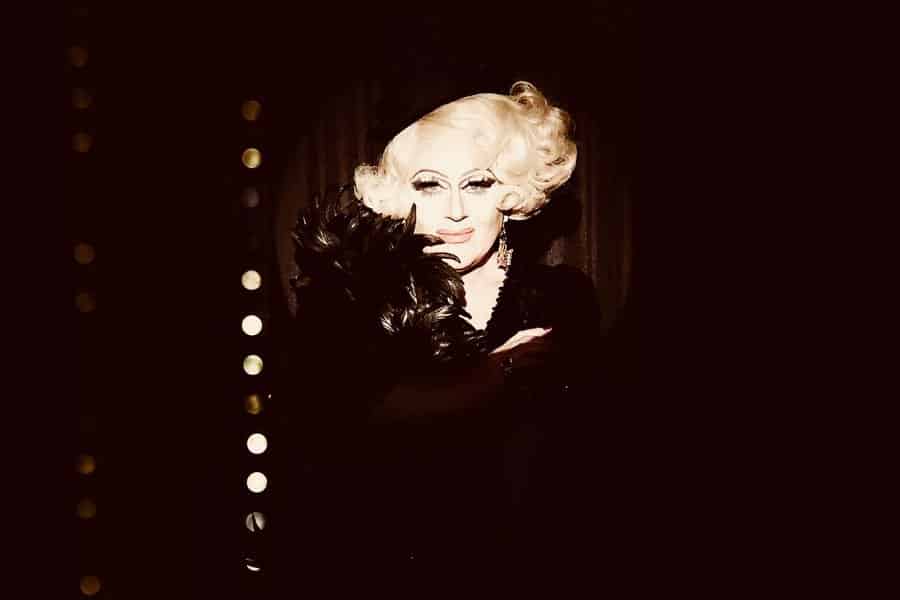 Hope Springs is the Rolls-Royce of drag acts, not least for her ability to confect all her material, especially the exquisitely crafted and appealingly catchy songs, but also for the ingeniously thoughtful and dramatically fully realised mis-en-scenes that she dreams up as vehicles for each show.  They seem to be getting more theatrically developed as they go along, departing from mere chick-at-a-keyboard singing a few ditties and dishing out some quippy, camp one-liners routine, and getting more and more into character- and situation-based comedy.  The illusion offered here is of the superannuated Vegas showgirl, washed up on the unemployed shores of Dungeness, offered an unexpected position in Das Kabarett Vaudelesque in Berlin: a bag is dutifully packed, a dark raincoat hastily belted, and we are launched into an account of her artistic and personal struggles in the heartland of Cabaret and geo-political divides.  In fact, it is all illusion: all the work of Ty Jefferies, an indominatable presence on the stage, with a tireless appetite for hard work and industrious craft.

And what jolly good fun the results prove, too.  From the apt opener, ‘There Is Ever A Place To Wander’, a romantic, chromatic, Jerry Herman-style curtain-raiser, the scene is set in a lilting but bittersweet mood.  The narrative then kicks in, and we are into an ‘I want’ song: ‘I Want To Sing In A Berlin Cabaret’.  This seems very much the terrain of musical theatre, it just happens to be in the hands of a solo performer.  For those who have seen her work elsewhere, there is no trio here, just a pair of nifty hands and a simple Joanna.  And that is all we need (although one could so easily imagine the numbers getting a bigger – and more expensive – treatment: they are so damned good).  But this is the way Hope Springs is so often seen: at glamorous and glitzy venues as well as tacky gay bars. 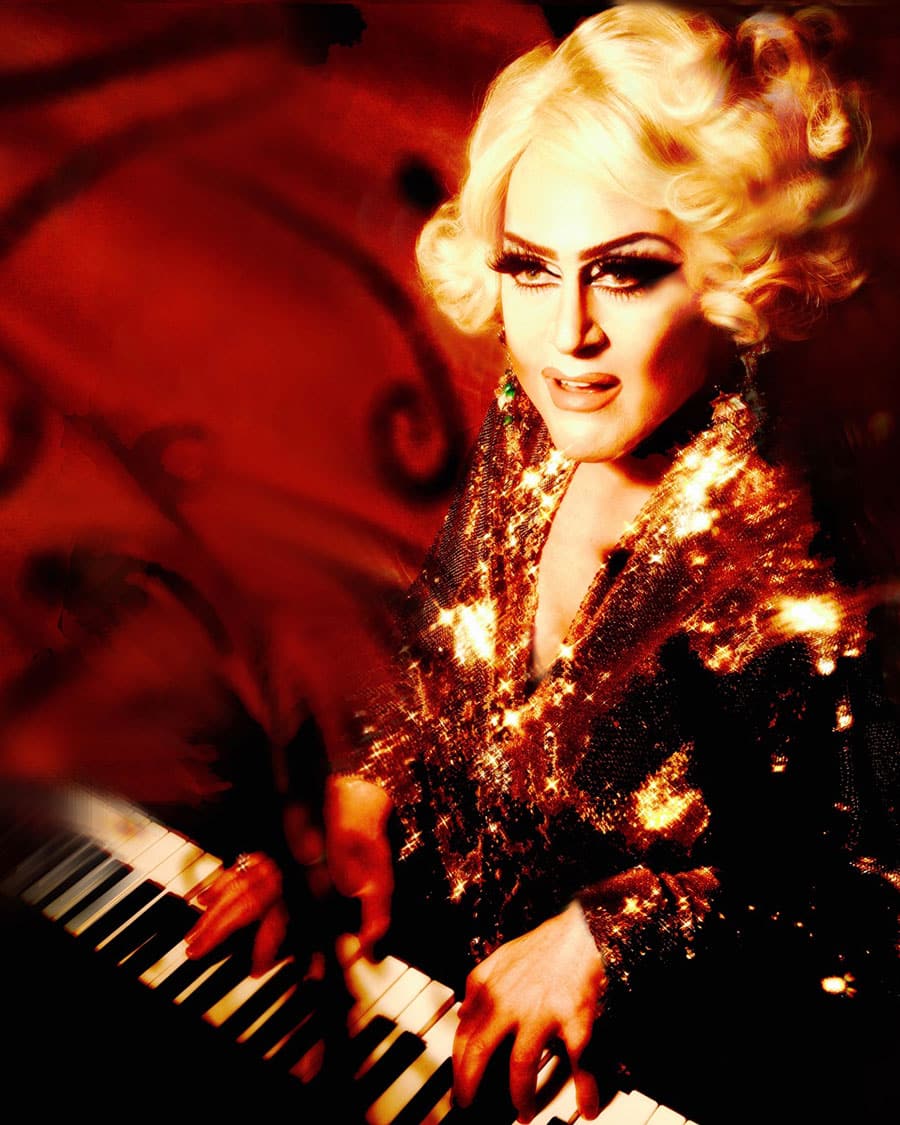 The joke here is that the Berlin Wall has been driven right the way through the venue.  Hope shows up at the West Berlin bit, where she is unknown, but the surly staff helpfully suggest she might apply to the East Berlin wing of the club.  And so, brazen and enterprising, over the Wall she goes, in full regalia, just about the only person ever to ‘escape’ from West Berlin and into the GDR!  She presents herself at the stage door of DKV-Ost, where she is admitted by the tall, very tall, and sturdy, very sturdy (we know the type, we have seen him around Berlin, oh, so often!), doorman: Hans Zoff.  This aptronym is the stuff of pure Carry On… and there is more, so much more, of similar kind to follow.  A simple chanson realiste propels us into a closer understanding of who we might find, and what they might be doing, at ‘Das Kabarett Vaudelesque’.

After some entertaining business with a suitcase and a change of boas, and the donning of a perkily placed top hat (yes, we DO know who used to wear one of those!), and we launch into a kind of poetry reading version – away from the piano – of ‘Marlene Stole My Act’, a revelation by one of the senior performers at Hope’s new workplace, Fifi.  It is a tale of painful regret, like much of Hope’s material, but – like the lyrics of Lorenz Hart before – the sheer beauty, the loveliness of the turning of the phrases, the weaving of the rhymes, elevates the content out of any taint of maudlin: there is such gaiety in the writing, such verve, that it is impossible for it to make one feel miserable.

We then get a charming ‘list’ song: ‘I Love Berlin’, which is actually about just about everywhere EXCEPT that city.  No matter.  It’s witty, and a tidy prelude to the elegant sorrows of ‘My Friend The Moon’, a number with such exquisite melancholy that it captures the hearts of all present.  Then, we mooch through another smidgin of poetry, this in the manner of Gertrude Stein: ‘The Obitch-uary Of Tilly Losch’.  And then we get a number from a show called, ‘Baby Steps’: ‘Wanda’ is a character portrait of dissipated youth, a flimsy tale, but cast out of the iron of Hope’s creative will.  More music follows, the beautiful slow fox-trot of ‘Joe’, executed in an astonishing double-boa (it sounds like a move out of ice-skating, and it’s just as complicated to pull off).  Before long, naturally enough, it is estranged husband Irving back in a trailer park in Dungeness who rescue our heroine from her incarceration in socialist realist hell, and then it is time to say Aufwiedersehen to this lovely spot… and to fit in a stealthy final reprise of Hope’s trademark, ‘The Devil Made Me Do It’.