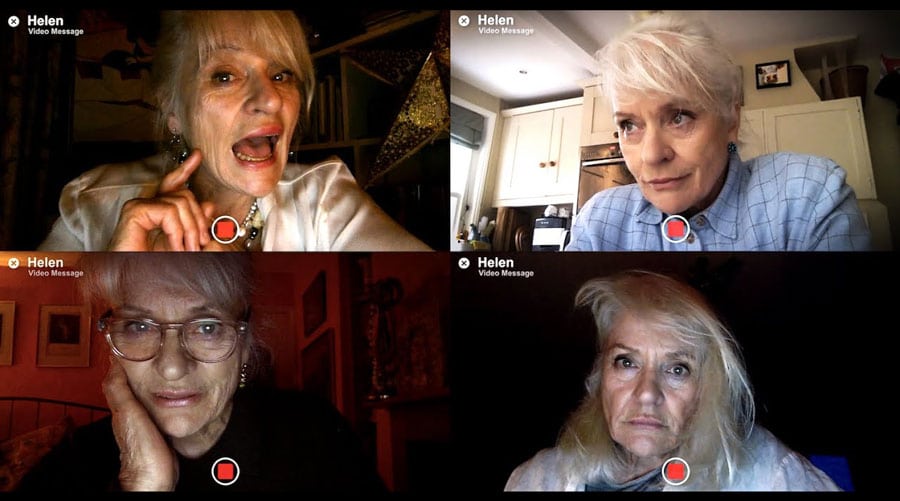 When suddenly deprived of live venues theatre directors have had to think hard about how to generate new content for their audiences. Recycling archive footage of productions of yesteryear can only be an initial stop-gap providing nostalgic memory moments or opportunities for those who missed out first time to get glimpses of unique dramatic experiences. Nick Hytner’s decision to revisit Alan Bennett’s two sequences of monologues for television – Talking Heads – is the most reported example of what now appears to be a trend: to take plays written for one character, whatever the medium, and present them online directly addressing the mutual confinement of actor and viewer.

Michael Longhurst has turned back to a half-hour long monologue first played on stage by Diana Quick in Edinburgh in 2010. We view a sequence of short videos to camera to which no reply is ever received. Ten years ago the technology of video messages was still relatively unfamiliar, whereas now it is very much at the centre of our everyday communications. What was novel then is commonplace now, but all the more suddenly central to our present circumstances. This is a shrewd choice of material offering a precisely calibrated window into our present world.

We begin with a view of Judy’s desktop as she prepares to record a message to her absentee daughter, Helen. We learn that Judy is a retired lawyer with two grown children, who lives with her husband in prosperous, active North London retirement. As each of the dozen or so messages proceeds we gradually learn more of her life and in particular, given the lack of replies, her difficult relationship with her daughter, who has gone to live and work in Palestine after quarrelling with her mother.

Adam Brace has not gone out of his way to make this woman a sympathetic character. She lacks self-knowledge, particularly of the extent to which she is manipulative and controlling while appearing not to be. You can certainly understand her daughter’s unwillingness to engage. Moreover, you get the sense that the other people she encounters – whether an Afghan refugee invited to dinner or the displaced president of the women’s league for peace that she has recently taken over – have much to tolerate. But that is, I suppose, the key to the dramatic tensions of monologues – we have a privileged perspective on the speakers that they can never have for themselves. Their privileged ownership of the medium is matched by our broader bandwidth over their lives.

The outlines of this self-absorbed and partial person are, however, memorably infused with the rich textures of Quick’s performance. Through her own artful use of changes in make-up, hair and costume, she provides a variety of settings and moods in her own home that brings visual freshness to a production that could otherwise simply be too static. She also generates a wide palette of emotions from initial domestic complacency through to real bleak despair and pent-up anger with which we can all identify in the pressure-cooker claustrophobia of present times. Whether it is sloshed beseeching, anguished pleading or attempts to be sweetly reasonable with the absent daughter, a clear sense is communicated both of a complex woman who senses that her own life and identity is slipping away and a mother who wishes to makes a connection but lacks the insight to do so. Connoisseurs of Quick’s work from Brideshead Revisited onwards will recognise the same qualities of poised, cool, elusive grace, punctuated by emotional jags of unexpected ferocity. The vignettes we receive here make you wish she had played Medea or taken some of Albee’s leading roles.

Within the limitations of time and framing the production values are strong. Quick and Longhurst judge well the reductions of scale in stage gesture and movement needed for this smallest of screens; and the camera angles and lighting effects are used imaginatively without breaking with the illusion that this is Judy’s laptop camera at work. Just as in Bennett’s monologues you get good balance between realistic narrative and time shifts that allow the reader to sense enough of the layers of the backstory.

This could easily be a self-regarding piece of entitled Islingtoniana bounded by dinner parties, good causes, patronising charity and smug virtue-signalling. But thanks to Quick’s deep empathy we get much more. Though we never get to meet the daughter we end up with a nuanced and timeless portrait of frustrated mutual misunderstandings, and with a lowering sense of how the personalities involved must always have been at odds and will remain so. Something foreordained and foreshadowed in the cyclical themes elevates this performance to a genuinely tragic note.