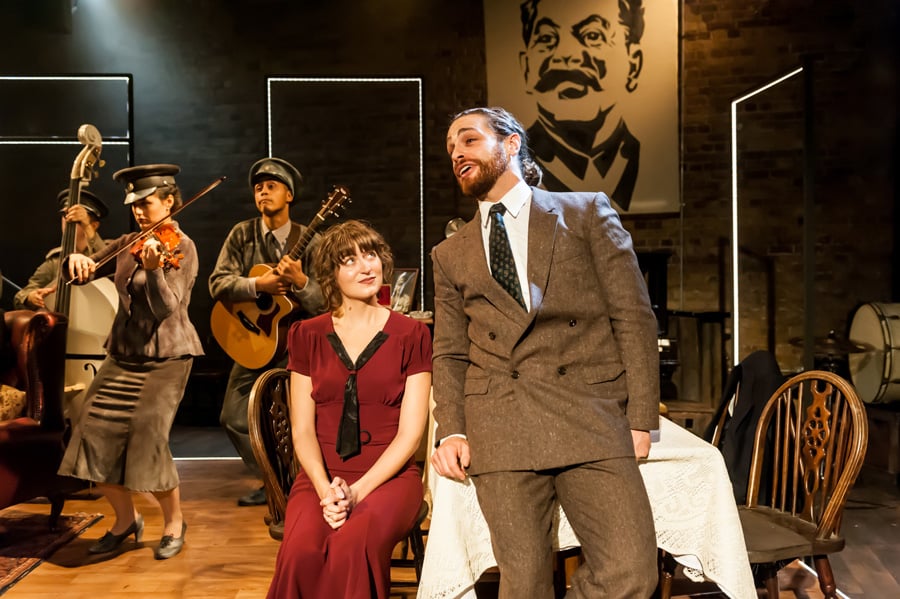 This is a fascinating new venture and one we should all applaud: Debunk Theatre are building bridges between the UK theatre scene and their home base in Central Asia and Eastern Europe.  Now that’s what I call ‘outreach’!  Here, they offer us an Azerbaijani story (by the living author, Elchin – who was on hand to see this premiere) of everyday fear and loathing in Stalin’s Great Purges, where the dreaded ‘knock on the door’ from the secret police came at midnight; things are complicated further by a particular midnight being brought to our attention happening to be on New Year’s Eve, when everyone should be looking forward to the coming year with hope and optimism. 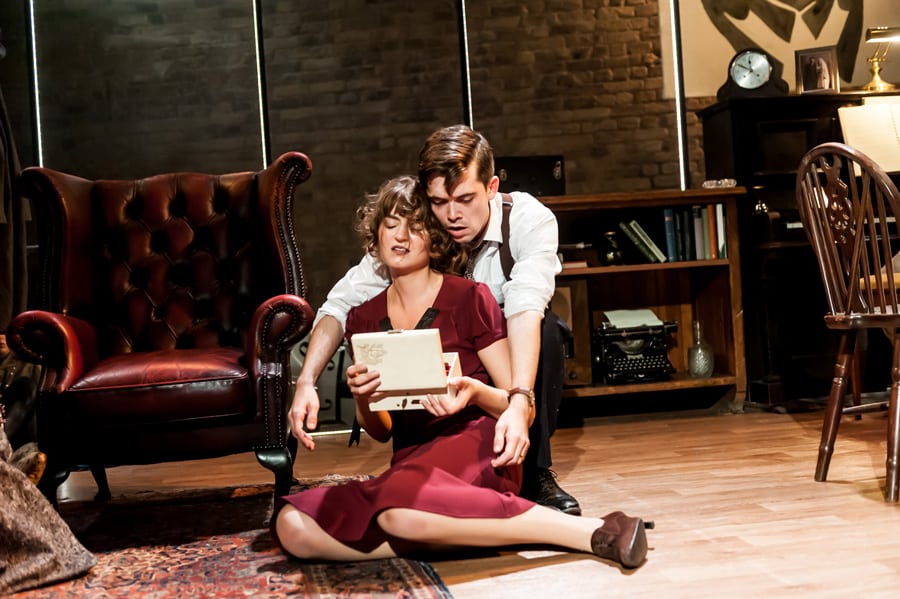 And, in a sense, the Man – played with energetic gusto by Colin Burnicle – and his Woman (a much cooler and more wistful Norma Butikofer), are some of the few winners in this terrible world: in fact, he asserts that he is now considered to be ‘above suspicion’, and so can indulge speaking freely to criticise the regime at home in between drinking heavily and bragging of his good fortune.  They are well dressed in new clothes and have a very comfortable, very bourgeois flat (costume and set design by Elliott Squire).  Also on stage with them are four more actor-musicians in shabby uniforms, who seem to be the ghostly remnants of people who have been sacrificed by the Terror of trumped up or hysterical denunciations, arrests, torture, show trials and executions.

Into their brittle, nervous world – sure enough – comes their very own knock on the door from Leon Scott, sort of like ‘An NKVD Inspector Calls’, who then abruptly and rather mechanically inverts their good fortune into their own personal version of hell, and – indeed – he even lays claim to being the Lord of the Underworld himself.  Busy guy.  Just to rub it in, a few minutes before midnight their clock appears to stop, and we hang suspended in time, while Old Nick tries to make up his ‘quota’ numbers before the witching hour approaches (‘And if I can’t do that, who can?’ he joshes.) 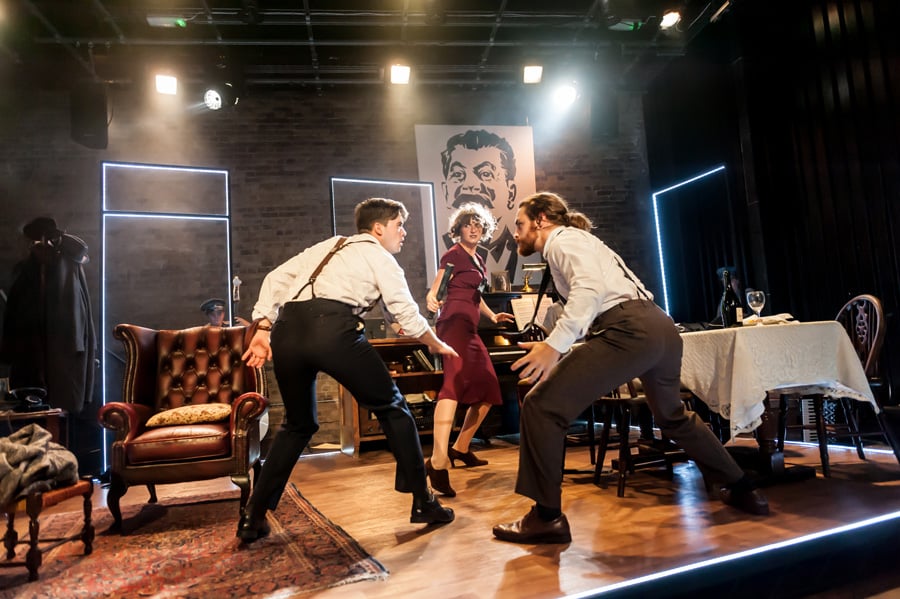 Equally predictably, he is not going to take the couple as a pair, but he wants to pit them against each other.  In doing this, lo and behold!, we further discover that each has been keenly denouncing the other to his thugs.  So far so neat and tidy.  And so depressing.  The script, by Timothy Knapman, seems to stick fairly closely to the original stage play, ‘Citizens of Hell’, and it is a very interior, very static affair, with long conversations about events which happen before the action of the drama.  The couple suffer the bullying of their unwelcome visitor for a while, and then rashly decide they are going to turn the tables on him, with utterly predictable consequences.

Knapman and his composer and co-lyricist, Laurence Mark Wythe, jazz things up a fair bit with some often cleverly written songs – the opening ‘The Future Came A-Knocking’ has promise – but there the main problems with this play with music start to become serious.  The score is by turns sunny or sentimental, but never anything less than easily accessible and blandly pleasant: it is also as simply written as the script with certain favourite chords sounding out over and over again, never really seeming to go anywhere – like the circular and almost hermetically closed book.  It so happens that these writers have written, and continue to write, for outfits like National Youth Music Theatre, as indeed the director Kate Golledge has directed similar works, and the show does sound very, very much like their characteristic product.  And the more one hears of it, the further removed one seems to become from the modest, chamber-sized, brief little drama at its heart. 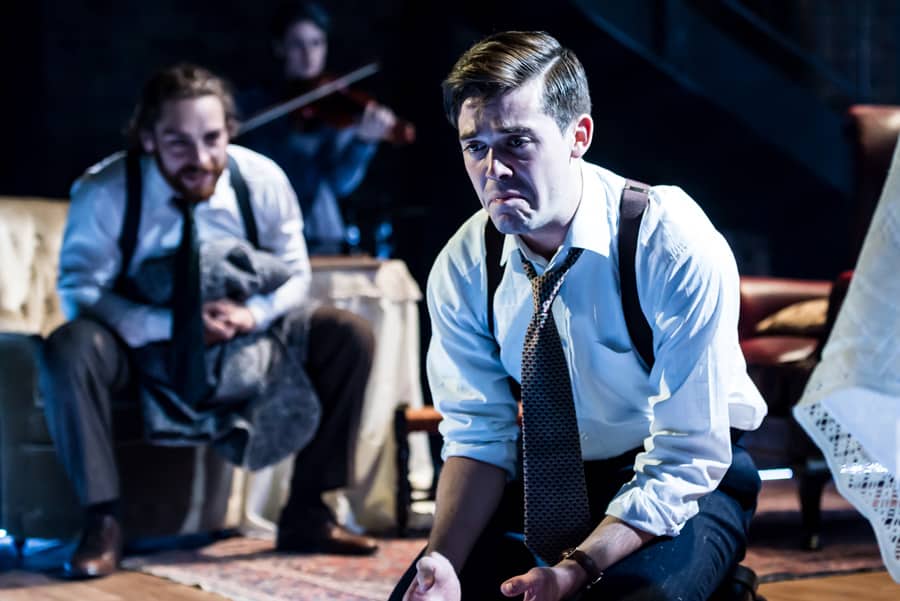 However, if you like that sort of thing, then doubtless you will be able to warm to this odd hybrid of a piece.  Nevertheless, you are certain to question the wisdom of some of the production choices, as I am sure the creative team are also questioning them.  There is not much room in the Union, but there is still less – especially for Chris Cuming’s smart choreography – when the action is squeezed onto a crampt rostrum serving as the Man and Woman’s living room.  And what a living room: so naturalistically stuffed in a play that yearns repeatedly to become fully expressionistic, and yet also framed by door and window frames of lights.  It seems to be neither one thing nor t’other, and that doesn’t help to draw one in and feel involved.  But if Brechtian alienation is desired here, why is the score so adamantly emotional, with some numbers feeling as if they have strayed in from a little known Andrew Lloyd Webber show, and others reminding one, repeatedly, of Sondheim, Kander and Ebb, and so very many more.  Pastiche is here the order of the day.  Are we being asked to think of it all as ‘fake’?  Is it really all deliberate?  It’s hard to be sure. 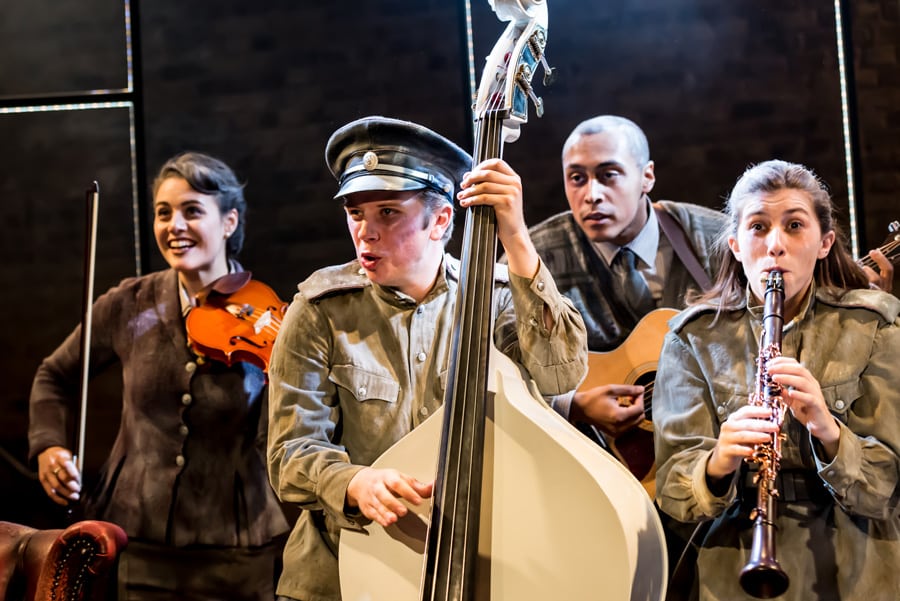 This proves, I feel, ultimately unfair on the actors, who are left to make sense of a production and script and score that – really – do not add up.  They can’t be expected to work the miracle of resolving so many internal contradictions.  The rest of the team, Melania Maggiore, Tilly-Mae Millbrook, Ashley Daniels, Luke Thornton and – especially – the grisly infernal intruder of Leon Scott, give it everything they’re got: they play musical instruments beautifully, all from memory, they sing well, they dance, they act.  Fridthjofur Thorsteinsson lights them with some flair and Harry Haden-Brown keeps a steady tiller on the hand of the erring bark of the score throughout: he almost convinces us that it has more merits than it actually possesses.  And when on rare occasions they are allowed to escape the never-ending circle of ‘tell and don’t show’ that dominates most of the script, the cast do connect with the audience, especially in the edgier, more dynamic second half.

Golledge herself is on record as saying that the job of a director is to disguise the weaknesses of a text from the audience.  In this case, possibly through seeking to welcome and include ‘layers’ of interpretation and meaning from her team (and company?) – as she describes in a programme note – I cannot help but feel that what she has, doubtless unwittingly, done is to draw attention to all sorts of problems with this strange fish of a show.  It’s a brave experiment, but it doesn’t quite gel.  Not at the moment, anyhow.

BOOK NOW FOR MIDNIGHT AT THE UNION THEATRE