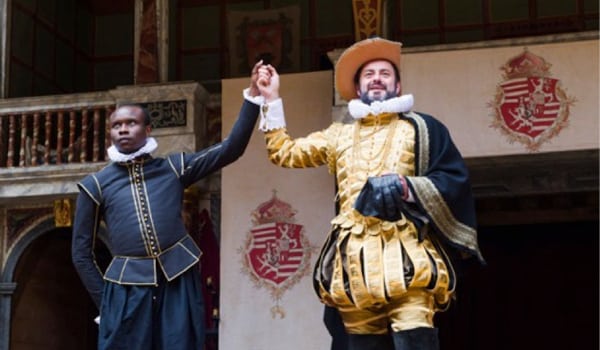 Writing in The New York Times in 1989, Frank Rich, the legendary theatre critic, said this about Mark Lamos’ revival of Measure for Measure at the Lincoln Centre:

“Why stage this fascinating play – whose so-called problems are challenges to theatrical exploration – if one has nothing burning to say about it?”

And Rich’s question is not satisfactorily answered by a defiant/apologetic “I have, or soon will have, done all the others.”

Measure for Measure is a complex, intricate play. As a direct consequence, it can be played a number of ways: the characters, plots and twists respond equally well to very different overall approaches.

The Duke realises that his lack of good government had led to near chaos and wanton debauchery on the streets, among his people. He decides to step down for a while, take a kind of sabbatical, and appoints Angelo as his deputy, to see what happens. At best it is a social experiment, at worst, a total abrogation of duty. Angelo is a repressed, troubled, apparent puritan and he takes his position seriously, setting about cleaning up the city, bringing tough, uncompromising order, and harsh “justice” in his wake.

Among his acts, Angelo condemns Claudio to death. His crime? Impregnating Juliet, the woman to whom his is betrothed, and whom he loves. Juliet loves him too. Claudio asks his friend Lucio to visit his sister, Isabella, who has recently joined a nunnery, to beg her to intervene on his behalf with Angelo. Reluctantly, Isabella agrees.

She meets with Angelo who becomes intoxicated with her intellect, her clever arguments, her sense of justice, her beauty – he assaults her, recovers himself, then proposes that he will pardon her brother if she will agree to have out-of-wedlock sex with him. Shattered, Isabella reports back to her brother who urges her to consider Angelo’s demands.

The Duke, disguised as a Friar, intervenes and manipulates events so that all turns out well in the end, although a corpse is mutilated and Isabella subjected to a fair deal of emotional torture along the way. Angelo is forced to marry Mariana, the woman to whom he had previously been betrothed (who loves him) and with whom he had sex, thinking her to be Isabella. Claudio is spared and free to marry Juliet; Lucio is forced to marry the mother of his bastard child. And the Duke proposes to Isabella and she accepts.

At least that is essentially how things go in Dominic Dromgoole’s revival of Measure For Measure which is now playing at Shakespeare’s Globe. There are many ways to approach the play but Dromgoole has gone for, essentially, the romantic comedy approach with quite a lot of excess bawdiness added for good measure. It works well enough, but it comes nowhere near the blazing and confronting heights this play can reach when its limits are pushed and its darkest crevices carefully examined.

This is a feel-good production of a difficult play. The very best thing about it is Dominic Rowan’s exceptionally charismatic Duke. In the second half, particularly, the underlying comic approach to the play allows Rowan to have a great deal of fun, and the final scenes, which can be excruciatingly painful to endure (because in some productions, essentially, the Duke is emotionally torturing Isabella in those moments) are light and engaging.

Rowan has a great voice and seems very much at home in Jacobean garb. He handles the audience easily and manages to make the important serious passages of text work surprisingly effectively given the farcical surroundings. His rapport with Brendan O’Hea’s splendidly vain, foppish and idiotic Lucio (think Mr Bean crossed with Maggie Smith and you are almost there, dressed in vivid lime) is particularly entertaining. 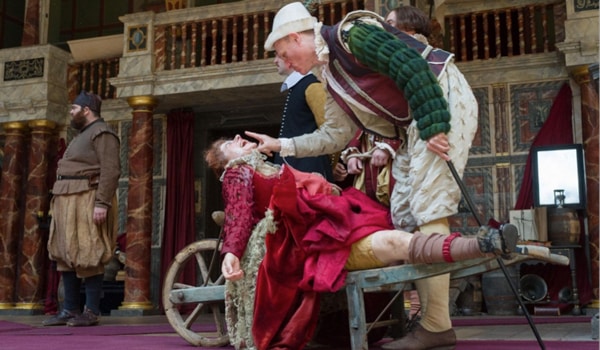 Dromgoole goes all out in demonstrating the state that the streets of the Duke’s city have got into under his lazy governance. There are small houses of debauchery and wild, drunken, virulent partygoers. All get broken up, their occupants imprisoned, or beaten, or branded or all three. There is so much sexual innuendo and in-your-face-o that the Globe gently hung signs warning faint hearted patrons of the naughtiness. Petra Massey overdoes Mistress Overdone quite deliberately, to the great approval of the groundlings. The crudity and obscenity is wide-ranging and includes Trevor Fox’s Pompey and Dennis Herdman’s Froth, who brings surprise nudity and a kind of The Hangover quality to proceedings.

There is excellent work from James Lailey as Friar Peter, Dickon Tyrrell as the Provost and particularly grounded and clear character work from Paul Rider’s fine Escalus. Dean Nolan is frighteningly funny as Barnadine, the great hulk of imprisoned flesh who refuses to be executed because he has a hangover. Nolan gives an unforgettable cameo.

Joel MacCormack does not get a proper chance to shine as Claudio because of the way Dromgoole stages proceedings and the fact that his deep, abiding love for Juliet (Naana Agyei-Ampadu) is given low priority in this version. He is eminently personable, but there is much more that Claudio can and should bring to the table. Rosie Hilal does nice work as Mariana, the woman who inexplicably still loves Angelo, despite his appalling treatment of her.

The greatest disappointment here lies in the way in which both Maria Gale (Isabella) and Kurt Egyiawan (Angelo) essentially throw away their roles. Gale’s voice is weak and dull and there is no sense of Isabella as a passionate or intellectual woman, determined and precise. She puts the wimp into Isabella’s wimple. Egyiawan delivers the words but there is little behind his eyes, no sense of inner turmoil or overwhelming anxiety. His Angelo is neither hot nor cold; tepid is the measure of this Angelo. Both characters go through the motions, but rise and fall without leaving a trace. 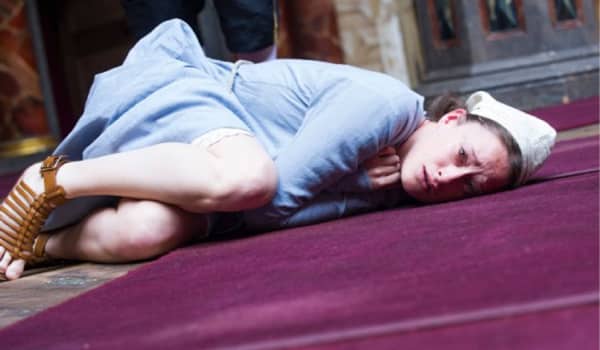 But the strength of Shakespeare’s play is such that, despite not coming anywhere near the heights it could, it still works, and is very entertaining for the most part. And there are overtones of Shakespeare’s thoughts about what constitutes a just society, the overlaps between justice, the law and mercy and the imperfection of man; if you look hard enough, the difficult questions are at least floated, even if they are not properly debated or considered.

Measure For Measure is, perhaps, the ultimate “problem” play in some eyes. Dromgoole solves the problem by presenting the piece as a rollicking bit of fun, with the odd serious or almost serious moment. That he can succeed in that is a measure of Shakespeare’s greatness and the quicksilver style of both Dominic Rowan and Brendan O’Hea.