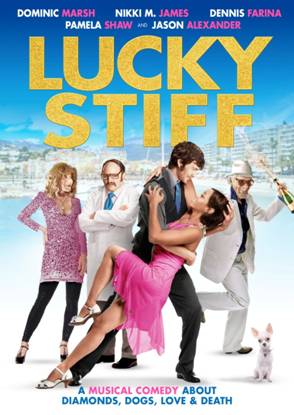 It is often a tough sell to get even a well established musical made for the big screen. So it seemed a particular puzzle that the off-Broadway musical Lucky Stiff had been recently slated for a big screen transfer.

Although it is best known for being the first collaboration of the massively talented Lynn Ahrens and Stephen Flaherty, the show did not make gigantic waves when it first played in 1988. It’s a delight to see a less well-known musical recorded for posterity but it is a total mystery what the catalyst was for this 2015 update.

Mild-mannered and gormless shoe clerk Harry Witherspoon stands to inherit six million dollars if he takes his dead uncle for one final trip in Monte Carlo. If he fails to meet the uncle’s strict itinerary, the money goes to the Universal Dogs Home instead, giving the charity an opportunity to be slightly uncharitable.

The plot is ludicrously convoluted and wacky, meaning it needed to build up a bit of emotional depth and character development to make it work. Unfortunately, this is in short supply; the film races through the plot, with a running time of 75 minutes.

This means that the overarching love story supplies very little in the way of passion and many of the supporting characters are totally baffling and one-dimensional. The cast does the best to bring life to the film; Dominic Marsh manages to make Harry a likeable leading character and an underused Jason Alexander provides a touch of comic relief as a nervy optometrist.

The score contains touches of the creators’ lyrical excellence, but there are more misses than hits; the songs used to introduce the Monte Carlo backdrop are particularly non-descript. There are a few enjoyable duets between the romantic lead, but otherwise both the script and score are eminently forgettable.

The production values are also questionable, with some budget looking green screen action, punctuated with ropey looking animation. Still, it’s not an easy one to direct; it’s hard to generate humour and whimsy when you have a dead body as a backdrop to most scenes.

Whilst Lucky Stiff may be of interest to fanatics for its sheer novelty value, it is so silly and saccharine that it may struggle to find an audience elsewhere.

LUCKY STIFF IS NOW AVAILABLE FOR DIGITAL DOWNLOAD THROUGH AMAZON.CO.UK