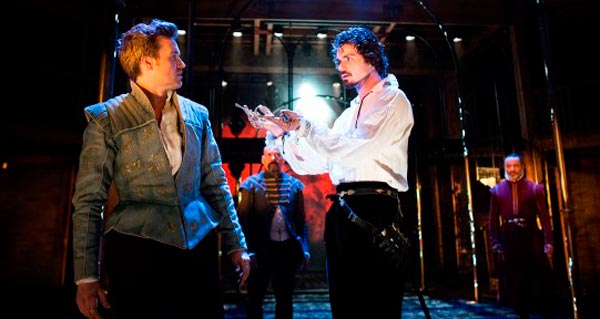 In the programme for Matthew Dunster’s production of Love’s Sacrifice for the RSC, now playing at the Swan Theatre, Professor Martin White states:

“According to the title-page of the 1633 quarto, Love’s Sacrifice was ‘received generally well’ by the Phoenix audience…(but) there is no record of a professional performance of Love’s Sacrifice until this one in the Swan Theatre. Such neglect in itself is not unusual. Many early modern plays have lain forgotten or ignored for centuries, often because their subject matter was deemed unsuitable. Ford’s choice of topics across his plays (incest, adultery, witchcraft, butchery) was particularly challenging; in the nineteenth and early twentieth centuries Love’s Sacrifice was judged to be lubricious and decadent…But it wasn’t just the content of a play that could damn it. A play simply might not conform to a particular period’s notion of what constituted a ‘play’. With Love’s Sacrifice, many critics have been confused by the deliberate inconsistencies in the characters’ behaviour or by the radical shifts in style and tone. None of these opinions on its content or its form had been measured against the play in performance. Though it may sound simplistic, the major reason that plays are not done is because they are not done. Consequently, they cannot develop a stage life, often have no place in the curricula of universities or schools, and there is frequently no easily accessible edition…All this can lend support to the jibe that if a play has been neglected then it must be because it’s no good. And yet how can that judgment be made until the play has been tested in action, in the theatre?”

Despite a delicious design from Anna Fleischle (the black velvet floor and beautifully detailed costumes especially) and some winning, often charming, performances from Catrin Stewart, Jamie Thomas King, Andy Apollo, Colin Ryan and Matthew Needham, Dunster’s production does not establish any case for Love’s Sacrifice to be revived.

The selection of this play for inclusion in a season at the Swan Theatre came about as a result of a dialogue between academics and the RSC, the academics pressing for a wider range of plays “contemporary” to Shakespeare to be programmed. That might be laudable, but, in truth, the RSC should only programme plays where there is something theatrical or lyrical or poetic (or all three!) about the plays which justifies the outlay and investment of effort, of both company and audience.

Currently in previews on Broadway is a new musical, Something Rotten, which concerns rivals to Shakespeare who lament that they cannot attract audiences in the shadow of the Bard. Perhaps those characters were based on John Ford? Earlier this year, a misconceived revival of another little known John Ford play, The Broken Heart, was programmed at the Sam Wanamaker Theatre. Both that production and this one make one think of Ford as a very poor imitator of Shakespeare.

Professor Martin White also says in the programme: “Ford’s work is distinctive for its frequent echoes of plays by other dramatists and its theatrical self-consciousness, and he expects his audience to ‘read’ his plays with that awareness.”

Or perhaps Ford was a writer who wrote contemporary send-ups or pastiche variations on the work of others? Perhaps his works constituted quicksilver attempts to surf current waves of popularity and were not intended to stand the test of time – rather like a Downton Abbey sketch on Comic Relief?

All that can be clear is that Dunster’s production of Love’s Sacrifice does nothing to establish its value as a piece of theatre worth reviving – anywhere, anytime.