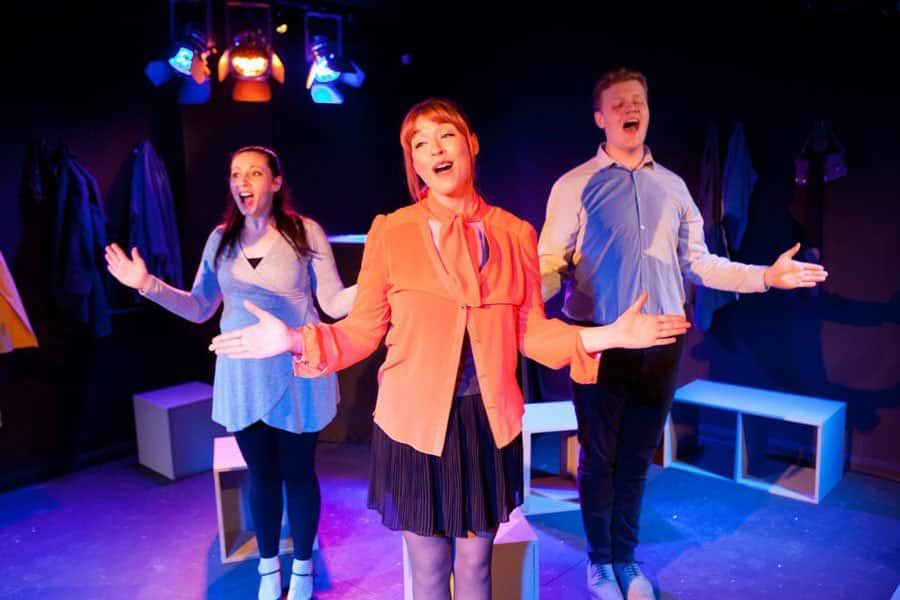 It’s not every week we get to hear a musical entertainment from Australia, and this show is a refreshing insight into a very different theatrical culture at this nice little fringe theatre above the roomy, gentro-rusticated hipster gastro-pub that is the White Bear in Kennington Park Road.  Although in this four-hander reflection on the many faces of love there are superficial resemblances to what we recognise from better known American models (eg. ‘I Love You, You’re Perfect, Now Change’), the heart of this work is in a very different space, expressing itself in language that is much more direct, rather less urbane and sophisticated, but rejoicing in an honest-to-goodness simplicity and earthiness that may come as quite a surprise.

The premise is straightforward: after a brisk curtain raiser, in the first half, we get a cycle of songs depicting the coming together of a variety of pairs in their various habitats; then, after an interval, we revisit those pairs, to discover what has become of them.  It is a neatly tidy format, by lyricist James Millar and composer Peter Rutherford, both of whom seem to have crossed paths working on the Australian production of ‘Matilda’.  And they are certainly well versed in mainstream musical theatre writing: each number seems to recall another genre, and sometimes specifically identifiable works: there’s even a boldly telling parody of ‘Sweeney Todd’ at one point, and there is much fun to be had in trying to spot the other connections.  However, you may find yourself yearning to hear the ‘real’ voices of these writers more frankly, especially in a show which puts such a premium on the core Australian values of honesty and directness.

Be that as it may, what director Grace Taylor does with this material is as handsome as handsome does: confident and smooth, the production always slides along elegantly.  In the ‘interesting’ L-shaped space of this venue every move counts and every position is expressive and Taylor is a master at catching the nuance in each moment.  In this, she is perfectly matched by her choreographer, Charlie Burt, whose deft arrangements enliven the impact of the numbers: in fact, the two work together so symbiotically, it is impossible to tell where the creation of one leaves off and that of the other begins.

They are a strong pairing, and a wise bringing together of the producers, who also make up half of the cast: Alasdair Melrose and Jessica Tripp, whose name adorns the company, Theatretripp Productions.  Both graduates of the RCSSD, and capable troupers themselves, especially in the splendidly realised ‘acting’ scena ‘A Rock’, Jessica has drawn on her Australian roots to bring this work to London, and together they have built a strong company around them.  They are joined on stage by the powerfully voiced Charlie Bowyer, who has already played the male lead in ‘Beauty and the Beast’ (for the Belgrade, Coventry and Lincoln Drill Hall) and from whom we will surely be hearing a great deal more – his voice has warmth, depth and flexibility combined with a commanding stage presence, and also by the impressive ingenue Ariane Sallis, who is a great find: attractive, a smart mover, with a hugely expressive face, and a voice that packs a stonking range of styles, she is always exciting to watch and listen to.

Musically, the show is full of challenges.  MD at the piano is Tim Shaw, who is a superb choice for this intimate revue: he knows exactly how to follow actors and always allows them to be heard, even in the most full-throttle rock’n’roll moments of the heaviest numbers, while providing bewitchingly limpid textures in the most tranquil and reflective episodes, like the wonderful ‘A Single Poppy’.  Equally, he is a consummate marshaller of voices, and in the frequently densely written harmonies for this quartet he always achieves clarity and precision: in fact, musically, this aspect of the show is one of its most interesting facets and may hint at where Rutherford’s musical soul lay lie.  It would be so good to hear that composer following his own instincts more.

The show is dressed simply by Verity Johnson and lit with unobtrusive efficiency by Yana Demo.  All in all, it is a well managed and pleasant debut for this enterprising new company, who have made so many right choices with this production that one looks ahead to their future ventures with keen anticipation.