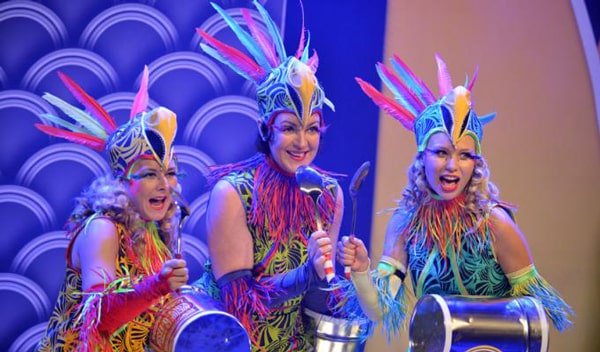 Remember the singing and dancing penguins in the classic 1964 film Mary Poppins? Imagine if they had decided to take advantage of their talents by seeking a career on the stage. In new musical Love Birds, this quartet gain a spot in a musical revue, Love Birds of 1923, and are drawn into the back-stage tribulations of putting on all-avian vaudeville show led by a cast of parrots. 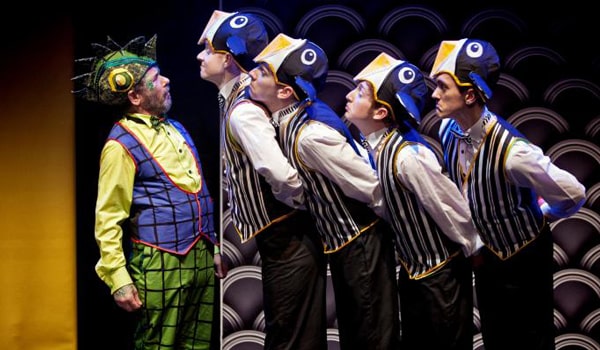 The musical’s music, lyrics and book have been created by Robert J Sherman, the son of Robert B Sherman who, with brother Richard, was responsible for classic songs in not just Mary Poppins but also Chitty Chitty Bang Bang, The Jungle Book, The Aristocats and Bedknobs and Broomsticks. The song-writing genes are demonstrated in Love Birds which is full of delightful melodies and witty lyrics that capture the style of classic American show tunes. Like a revue, the hour-long show is packed with songs, accompanied by lively choreography – including tap – devised by the director, Stewart Nicholls. The actors cleverly mimic birds in their movements, even down to their eye lashes, complemented by plenty of feathery colour and spectacle thanks to stunning costumes by designer Gabriella Slade. 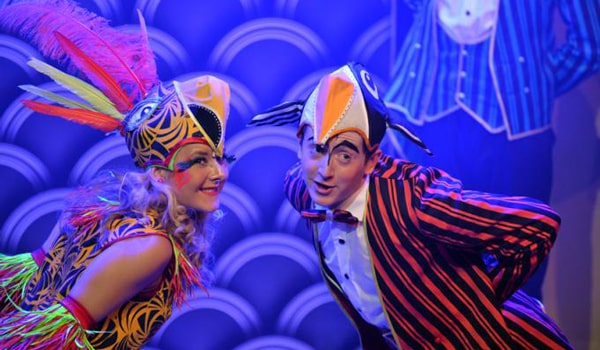 The talented, energetic cast quickly overcome any questions over whether we can accept actors playing penguins and parrots in a show aimed at grown-ups. Greg Castiglioni regularly steals the show as the temperamental opera-singing macaw Baalthazar whose tantrums and obsession with crackers threaten the revue’s future. Anna Stolli, Joanna Sawyer and Ruth Betteridge put in strong performances as the parrot singing trio while George Knapper, Jonny Purchase, Rafe Watts and Ryan Willis are excellent as the penguins, even though it takes a while to tell the taller three apart. The revue’s MC and impresario, Armitage Shanks, played by John Guerrasio, turns out to be not just a dinosaur – unevolved and old-fashioned – but, in a peculiar twist, also the Loch Ness Monster.

Love Birds is a real hoot but, at 60 minutes, it is clearly a work in progress, squeezing in well over a dozen different songs while giving us just the skeleton of the plot and characters. After its premiere at the Edinburgh Festival Fringe, it will be interesting to see how Robbie Sherman and his team develop the show and spread its wings.

Watch a trailer for Love Birds