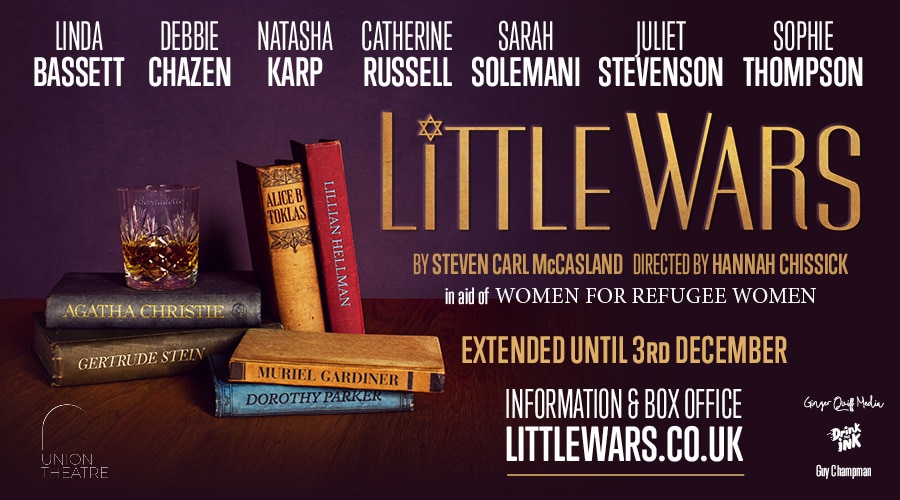 There have emerged some perils whilst watching streaming theatre, not least interruptions from neighbours, delivery people and other callers. Make sure you will be uninterrupted when you settle down to watch this wonderful rehearsed reading of Steven Carl McCasland’s extraordinary play. Don’t be put off either by the words “rehearsed reading”, with a cast of this calibre the script is alive and vibrant. On the eve of the fall of France in 1940, Gertrude Stein and her girlfriend Alice Toklas hold a dinner party for guests Lillian Hellman, Dorothy Parker and Agatha Christie. This is a dinner party gathering to die for! But, mouth-watering as all this is, we are aware from the outset that war is looming when freedom fighter Muriel Gardner arrives to arrange safe passage for three Jewish refugees that Stein and Toklas are supporting. Deciding to stay the night, Gardner adopts a pseudonym and tells the guest she is a psychiatrist, which the writers’ sense may not be the full truth.

As the night progresses and the alcohol flows, there is much bitchiness, especially between sworn enemies Hellman and Stein, but many tender and honest revelations, (Parker about her drinking and abortion, Christie about her much-reported disappearance.) This cast will make you want to see the production live on stage one day.  The always excellent Linda Bassett is majestic as Stein, managing to look down her nose at Hellman constantly through the camera, but also conveying a warmth and sensitivity. Juliet Stevenson is a feisty Lillian Hellman, her honesty and directness both hurtful and necessary, recognizing the danger the women are in. Catherine Russell is a beautiful, sensitive Toklas, Debbie Chazan a witty yet broken Parker, and Sophie Thompson wisely downplays the eccentricities of Christie and brings forward the inquisitive detective writer. Sarah Solmani is excellent as Gardner, calm, urgent and brave. When it transpires that Bernadette, a wonderfully fragile and powerful performance from Natasha Karp, is not simply Stein and Toklas’s maid, but a Jew they have rescued from Berlin and are harbouring, the women put aside their differences and conspire to get her out of the country.

Hannah Chissick’s superb direction catches every beat of the text, landing both comedy and poignancy effectively. There are occasional sound problems, but this is rarely distracting in a reading of such urgency and power. It’s a pertinent play about refuge, safety, hiding, women, survival and love. There is, clearly, even through the screen, a strong bond between cast and creatives. The production is raising money in aid of Women for Refugee Women. I didn’t know McCasland’s play until now, and I urge you to discover it. One of the best online experiences I have had in this most challenging of years.