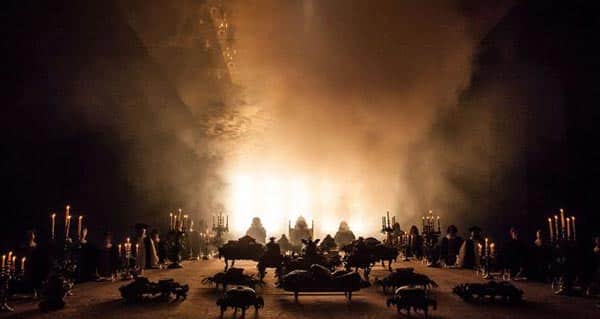 You have to hand it to Es Devlin and Soutra Gilmour. They know how to make extraordinary, overwhelming sets and vivid, detailed costumes. Their work in Lyndsey Turner’s revival of Caryl Chuchill’s Light Shining In Buckinghamshire, which opened last night at the National’s Lyttleton Theatre, is astonishing and, literally, breath-taking.

When the fire curtain is raised at the opening to reveal the intense, sumptuous and lavishly detailed vista of nobles from the 17th Century feasting at a huge table, seemingly every inch of the Lyttleton’s vast expanse occupied by actor or table, the effect is overwhelming. So much grandeur, so much profligacy. You cannot but wonder how smaller, unsubsidised, non “Elite” theatre makers would respond.

And, in part, this must be Devlin and Gilmour’s point. The rich high life of the entrenched nobility must be understood if the battle which Churchill’s play reflects upon is to make sense. The 1976 play takes a non-linear, off-centre look at the Civil War which led to the execution of Charles I and Oliver Cromwell’s Commonwealth of England. Rather than examining the main events and the thoughts and actions of the main players in the struggle, Churchill opts to look at those most affected by the conflict: the ordinary people, the poor, the disenfranchised, the women, the soldiers, the tradesmen. Through their experiences, a kind of sense is made of the greater machinations.

The centre piece of Churchill’s play is a tip of the hat to verbatim theatre: examining the actual records of the Putney Debates (an army shorthand system was used to record everything spoken at the debates, held over several days in late October, early November 1647) Churchill presents the actual words of the debaters, albeit in edited form. The sense of authenticity, then, is powerful, even if a sense of drama is not.

What is the most curious aspect of this production, the first in Rufus Norris’ tenure as Artistic Director of the National Theatre, is that nothing about the production seeks to illuminate or reveal or unearth the fabric, structure and gravamen of Churchill’s work.

The play is intensely intimate. It examines how ordinary people were affected by the wider world events, how big picture issues affected the pointy end of the day to day existence of the men and women of England. It is, essentially, a small play that deals in some big ideas. To achieve its best result, it needs an intimate, resonant production that concentrates and focusses on the minutiae. It’s original outing had a cast of six.

Staging it in the Lyttleton was always going to be a challenge – its natural home is the Dorfman or the Temporary Theatre. The Lyttleton stage is not the place for intimate theatre – it is a place for epic theatre, for big, bold-stroke pieces of comic or dramatic excess. And intimate works cannot be turned into epic works simply by placing them in huge spaces and throwing money and expertise at them. All that does, as is evidenced here, is make the set and costumes more important than the play.

There is an acute fascination in watching the richly intense banquet give way, bit by bit, to the advances of the common folk, to see the lavish table become stripped bare, and then transform into a place for measured debate instead of entitled excess. The wonderful lighting from Bruno Poet only accentuates the lush transition, as does Mary Chadwick’s atmospheric music. The hint of the regally attired Charles and his retinue, like a gorgeously detailed ghost, hovers in the background – there, but not there.

A “Community Company” of 44 swells the ranks of the performers, contributing a “rhubarb, rhubarb” fleshiness to proceedings and, occasionally, most notably in the Putney Debates sequence, illuminating the wisdom of Michael Green’s The Art Of Coarse Acting by uncanny demonstration. The programme boasts that the production allowed “the integration of a company of community performers into a main stage production”. As there is no indication the community performers were paid, their inclusion here, however important for them, is dubious at best, outrageous at worst. No one working on stage for the National should be unpaid; anyone working on a National stage should be part of the legitimate company.

Of course, including this “Community Company” does serve to underline points Churchill is examining: the way the entitled mistreat and use the unentitled. It may not have been intentional, but the use of the “Community Company” serves to highlight, tangibly and unavoidably, the key notion which sent Oliver Cromwell from the Putney Debates to a committee: are people valued by who they are and what they do or by what income they possess and their entitlement to it?

The sense of Churchill’s play is intensely personal. The programme describes it as a “folk play”. But Turner’s production is operatic and cold, highly impersonal in its lustre and excess. There is nothing folksy here.

Only the excellent Trystan Gravelle finds a way to rise above, or at least within, the trappings of the production to give a performance that burns with honesty and truth. His methodical and completely convincing turn as Briggs, an ordinary worker who joins up for the Army for pay and the possibility of justice, and who experiences disillusionment all along the way is very fine indeed. Alone in the cast, Gravelle refuses to permit his work to be swallowed by the tsunami of production values.

In the Putney Debates section, there is fiery conviction from Sargon Yelda, firm intransigence from Leo Bill, and indefatigable hope from Alan Williams, but the staging never truly permits a proper understanding of the points of difference in what is a remarkable moment in English history. Indeed, disengagement with the performers and their work is the rule here, rather than the exception.

Churchill seems to advocate that the failure to address the central issues in the Putney Debates is something which defines England today and which, truth be told, is an important, perhaps the most important, aspect of modern politics. Her point is sound, but it is completely lost in the great backwash the sea of spectacle Turner, Devlin and Gilmour have created leaves in its wake.

The first production programmed by Norris, and presumably conceived and executed with his specific blessing, is a triumph of form over substance. An epic, powerless staging of an intimate, powerful work. It tells you nothing about Churchill’s play but, terrifyingly, might say a lot about what is to come under Norris’s tenure at the National.