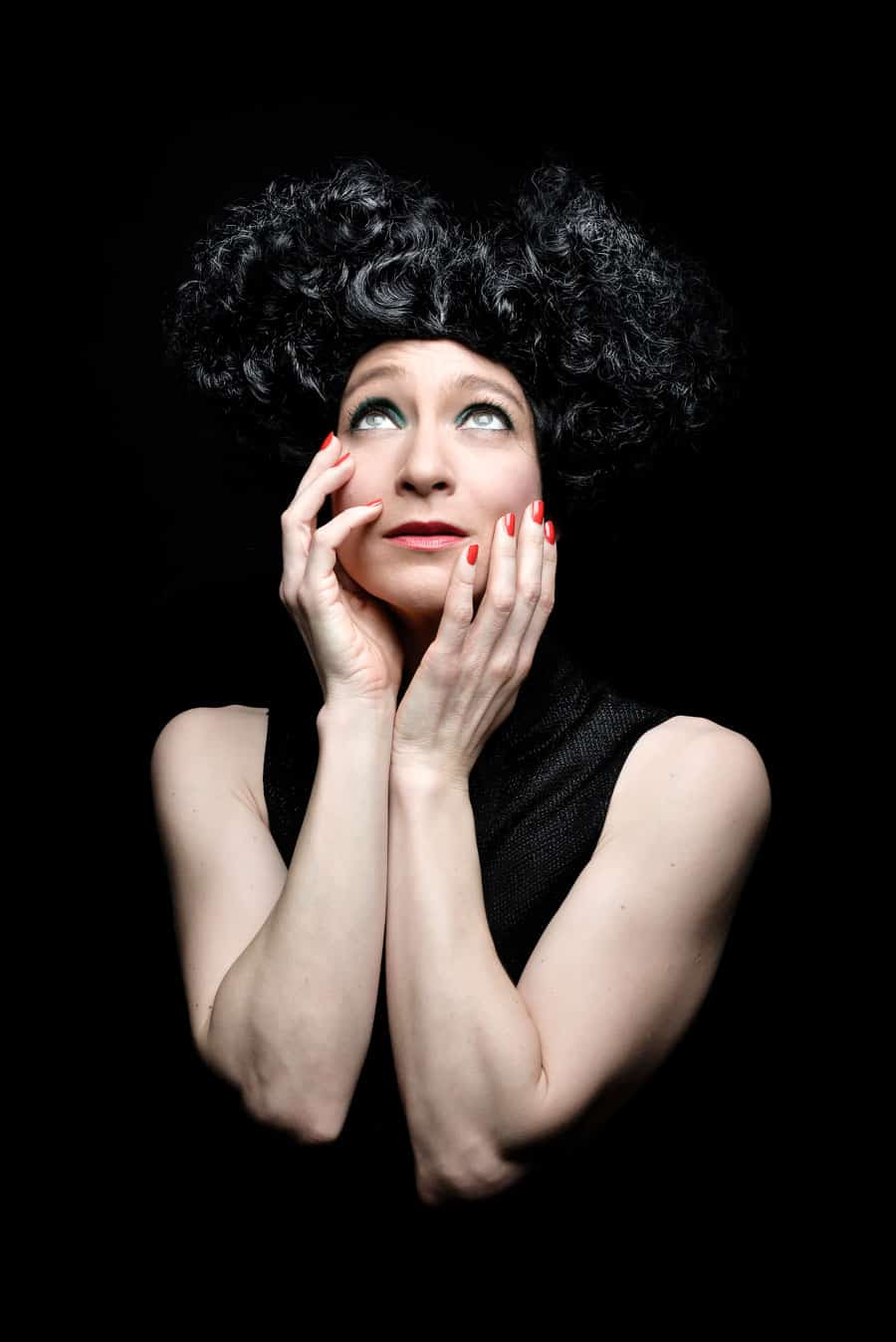 The delightful cabaret turn of ‘The frumpy pigeon’ (a l’anglaise) is a deceptively light creation by a pair of really top-notch songsmiths, MD Michael Roulston and actor-singer Sarah-Louise Young.  The joy of their work is mainly in the extraordinarily well-crafted and vividly realised performances of a sequence of pastiche chansons, whose styles span roughly the 1890s to the 1960s, delivered with meticulous care and ‘authenticity’ by the versatile diva, accompanied with suave verisimilitude by the canny pianist.  As a writing team Roulston mainly does the music, and Young the texts, but they share the overall responsibility for their work.

In a recent sequence of performances at Piccadilly’s chic Café Zedel, the pair swept all before them with their devastatingly convincing and beautiful homages to generations of French chansonniers.  From her first entrance, all transfixed, steely gaze and little black dress (with feathers), and clutching a large kitchen knife, clearly, this was a character intended to come across as potentially ‘difficult’ and ‘challenging’, and quite possibly a great deal worse.  So be it.  We readied ourselves for something traumatic.  Yet, what we got was, ‘My Voice’: a wonderful signature tune, expertly setting up the character and her importance, but not really hinting at the danger.  Nevertheless, it established that we were here to pay tribute to the voice that can, ‘…alert a ship to fog./  When I reach for a high note,/ I can paralyse a dog.’  These jokes are combined with refined stage artistry and are great fun.  So why the knife?

‘Some men just don’t translate’ was another smart ‘list’ song, where the rhymes fell with natural ease and good humour, given theatrical panache by the stylistically perfect expression.  ‘Surrender’ worked the room more broadly, and then ‘That night, that wonderful night’ became a comic duet for both performers, in which the laughs were kept sophisticated and fairly genteel, mixing her delusions of glamour with his realistic grasp of the plain facts of the case.  Again, this was all rather light and likeable, and a fair way away from the possibly murderous harpy we had been shown first.

The couture did get its own number to itself, a pleasant little waltz, and then Roulston had a Vic Reeves-like moment of comedy: this was well managed, but balancing the two roles is a delicate matter.  ‘Look At You’ was a wonderful beguine, followed by a clever narrative, ‘Every Wednesday Afternoon’, perhaps the closest thing we got in this evening of a parody of chanson realiste.   Then came the magnificent ‘Baggages’, offering a clever metaphor for life in its tale of lost luggage, including some elegant Brel pastiche in the repeated ‘carousel’ figures of both music and lyric.

There was some ‘audience participation’, developed out of ‘audience targeting’ and ‘audience manipulation’.  Each stage of this seemed to grow out of a different aspect of the central character’s obsessions, and while each was entertaining enough in its own right, it didn’t always feel that all of the material necessarily belonged together on the same stage at the same time.  While I would not wish to make direct comparisons, I can nevertheless think of some – not many – nightclub acts who manage to spin an entire cohesive biography out of their various numbers and bits of business.  When the songs are as good as these are, as a delighted audience you rather want the overall concept to be as robust, too.

An early tirade against Piaf, however, introduced a slightly sour, bitter taste of resentment into the character with whom we had just fallen in love.  And that slightly repellent edginess was maintained throughout the evening in a way that regularly mitigated against the warmth and beauty of the musical performances.  While this created a kind of camp, kitsch tension, it also introduced a note of inconsistency into the characterisation of the kind that erodes an audience’s ability to give itself over to an act wholeheartedly.

The show is full of powerful emotional communication, but perhaps needs a central point of focus, and for its peripheral characters to reinforce that central image more, rather than take us away from it on digressionary excursions.  The Michel Legrand-style ‘Thin Skin’ shone as a great song in its own right, easily capable of standing alone and taking the creativity of these entertainers further afield.  And by the time the reprise of the title song reappeared as ‘Your Voice’ and then led us into the finale ultimo of ‘Encore!’, we were ready to leave the cabaret with fond feelings in our hearts, and a copy of the CD in our pockets.