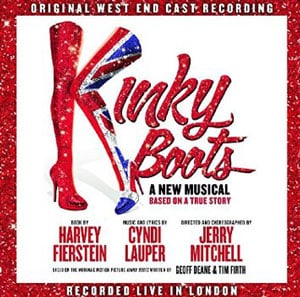 Following on from their win at this year’s Olivier Awards, the London cast recording of Kinky Boots has now been released. As with quite a few cast albums produced to accompany West End productions of late (Made In Dagenham and Legally Blonde amongst others), this album was recorded live in the Adelphi Theatre over several performances with an audience present.

This live recording can have several benefits when it comes to the recording of stage musicals. I’ve heard studio based cast albums where the soul of the show has been sanitised out of the recording in a studio setting in the search for a perfect recording. In this recording of Kinky Boots, the live recording works to the benefit of the show and you really get a feel of the live experience. It also allows for important dialogue in the middle of some numbers to be preserved to give context, which for me is one of the things that makes for a good cast recording. It gives Kinky Boots a raw and energetic feeling and really brings magic to the performances of this amazing cast.

Matt Henry’s Lola and Killian Donnelly’s Charlie sparkle in this recording, no more so than in Not My Father’s Son. Each of these actors are formidable talents and that talent explodes in numbers such as Hold Me In Your Heart and Step One.

Amy Lennox fabulous performance of The History Of Wrong Guys is captured here in full. It’s a performance that has well and truly established Lennox as one of the main players in West End musical theatre.

This cast album does give the listener a chance to really listen to some of the words in numbers like Sex Is In The Heel, which can tend to get lost in the staging of the show.

The London cast album is not encumbered by the dodgy accents that plague the Broadway album, but it still shows up some of the flaws in the dialogue. The introduction to Take What You Got, being a case in point. Kinky Boots still comes across as a show about Brits written by Americans, references to “London Town” still drive me round the twist.

Both act closing numbers capture the vigour of Kinky Boots, particularly the Act Two closer Raise You Up/ Just Be.

One of the benefits of having Cyndi Lauper compose your score is that a cast album like Kinky Boots can have a secondary life as an album played in a non-show context. In this regard I can see the cast album of Kinky Boots being a good calling card that might just encourage non-musical theatre fans to go and buy a ticket to the show. That has certainly been the case here as I’ve been listening to this album to review it.

PURCHASE A COPY OF KINKY BOOTS FROM AMAZON.CO.UK