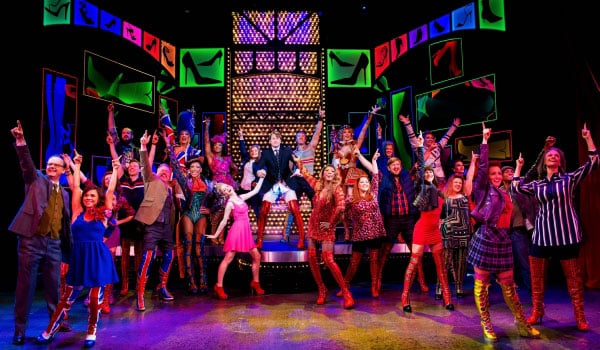 There are still those who scratch their heads in disbelief that Kinky Boots took out the Tony Award for Best Musical, Best Choreography and Best Original Score in 2013, a year when the field included Matilda, a show which, on any view of it, is superior in all of those fundamental areas. In truth, though, that head scratching is about the Tony Awards as an institution, rather than Kinky Boots and Matilda as musical theatre works.

The key difference between the two works is that Matilda is beautifully crafted by gifted creatives and can survive lacklustre performers; Kinky Boots is musical theatre by formula and relies totally upon superb performers to achieve power and weave magic. Happily, the London premiere of Kinky Boots, now playing at the Adelphi Theatre, features performers of the superb kind. For that reason it will probably do very well at the Oliviers, although, if it transfers, Mrs Henderson Presents may make it feel like Matilda did in 2013. (Read our review of the Broadway production HERE)

With a book by Harvey Fierstein, a score by Cyndi Lauper, and Jerry Mitchell on board to direct and choreograph, the core creative team behind Kinky Boots must be reassuring for the runs-on-board mentality that drives some investors. The truth, however, is that none of the three produce anything approaching their best work in Kinky Boots; if the trio had been completely unknown, I doubt the show would ever have been produced.

Partly, this is because the musical is an adaptation of a film and much has been lost in translation. More than that, though, this is an adaptation by Americans about British people, places, social issues and class concerns, and all of the very British aspects are presented through an American filter. Key characters speak in rhythms which are New York, not Northampton. There is an American filter over everything, which dampens, rather than illuminates, story and character. The burden on the performers is necessarily heavier as they have to cut through this filter to unleash the inner British-ness and make it gel. The piecemeal and formulaic nature of the narrative does not assist them in this task.

But such an approach may assist my task…

Top 5 reasons why Kinky Boots on the West End makes “Everybody Say Yeah”:

Lennox is sensational as Lauren, the whacky factory girl who flirts with and eventually wins the heart of the Boss. It is a comic tour-de-force from Lennox who doesn’t miss a trick, let a laugh opportunity pass, or do anything at less than dynamite power levels. She completely steals every scene she is in and her hilarious solo, “The History of Wrong Guys”, is the first moment in the show then you think that Lauper might be up to the task of composing a Broadway score. Start engraving that Olivier Award now, because if there is any justice Lennox will be a shoe in. 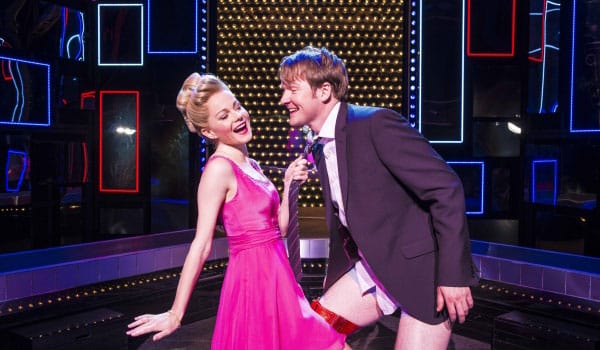 Donnelly is excellent as the somewhat simple, somewhat boring, somewhat confused heir to a collapsing Footwear dynasty. He has a completely engaging and pleasing affability which lets him make some of the awkward passages work better than they have any right to work (and didn’t work on Broadway). For example, the scene where he suddenly turns on his designer and friend, Lola, and is uncharacteristically vitriolic, sort of works in Donnelly’s hands. He has hang dog down to a tee here and that essential ordinariness, coupled with his powerful, soaring voice proves to be irresistible. It really is a case of making something out of nothing; not being a heel. His vocal work in “Not My Father’s Son” and “Soul Of A Man” is outstanding, extraordinary, first class. A terrific, uplifting performance.

Her name was Lola, she was a showgirl…Barry Manilow’s song provides all the inspiration necessary for the voluble and vivacious drag queen, Lola (aka Simon, the trained boxer and estranged son), and Matt Henry ensures his boots are made for walking (and singing) in a full-on, tits-and-teeth bravura turn. Sizzling, zany, and fierce as Lola, Henry has a field day where excess and eccentricity are tightly laced into every number and tart observation. His voice is phenomenal, especially in “Hold Me In Your Heart”, the divalicious 11 o’clock number. Henry did not seem quite so at ease when the make-up and drag was off but established nice chemistry with the homophobic worker, Don (an amiable Jamie Baughan). Less successful at smoothing over the deficiencies in the book, (the moment in the nursing home with his aged father jars) Henry is, nevertheless, damned good fun in very high heels. 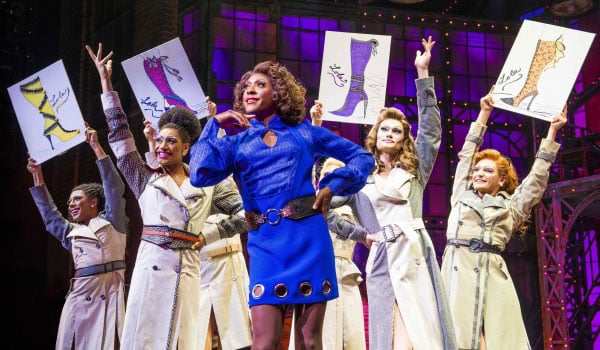 The entire cast pulses with vitality, sings with tuneful precision (although diction is often lax) and dances with exuberant energy and unrestrained glee. The big numbers are colourful and full of spectacle and intelligent effort. Smaller parts are generally well played with Michael Hobbs’ George and Amy Ross’ Nicola as standouts, the former for his laced up gentility and humour, the latter a whirl of Jimmy Choo ambition.

When everyone is onstage singing and dancing, it is near impossible not to smile. The finales for both Acts are toe-tapping sensations, no matter what kind of shoes you are wearing. It is difficult to resist the urge to dance or clap along with the ebullient tunes and the warm, celebratory performances.

Gregg Barnes provides gloriously camp costumes for Lola and her angels, some of which have to be seen to be believed, and all of which scream individuality and acceptance (in case the book was too subtle for any audience member). Kenneth Posner lights everything brilliantly – it is worth seeing Kinky Boots just to see the light display in Lola’s final solo.

The balance between singer and orchestra is not as it needs to be, often. The orchestra is too loud and the amplification for the singers not sufficient to ensure that the lyrics are conveyed. It’s annoying that this is not right because, especially with a new musical, hearing and understanding the words is very important.

Mitchell’s greatest contribution here is to provide some slick and engaging dance sequences. The routines which involve the conveyer belts of the shoe factory are particularly good. But, as the director, his eye is too firmly on the sequins and the starlight and not sufficiently focussed on ensuring that the narrative is made less sickly sweet and bleeding obvious.

The show has heart and worthiness splattered all over it; what it needs is nuance and charm, and a director capable of using spit and polish to make Kinky Boots beguile rather than stamp all over you. Subtlety needs to be back in the room, at least occasionally, with knee high glamour boots, exposed six-packs and whirling divas.

The set is dull. It’s efficient and compact, and no doubt will be cheap to tour. But it does not convey the spirit of the very different locations where significant action occurs. And it absolutely should.

Lauper’s score is a mixed bag. It doesn’t really have an overall cohesive feel; at no time do you have the sense that you are listening to a song from Kinky Boots. Most of the material is instantly forgettable, even though it has been delivered in a superior fashion. The songs that stand out have already been mentioned; “Sex Is In The Heel” is the other number which merits attention here, almost entirely because of the performances.

The cleverest thing Lauper has done is to ensure that each Act closes on a cracking tune sung by the entire ensemble. That really works and ensures that interval and post-show discussions are ablaze with praise for those numbers; somehow the disappointment of much of the music is washed away by those remarkable anthems, and the indelible memory of Lennox’ “The History Of Wrong Guys” and Henry’s “Hold Me In Your Heart” (show stoppers both). 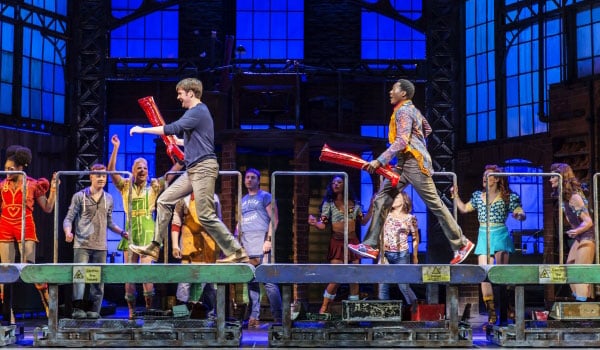 It is difficult not to muse on what kind of a score Jerry Herman might have provided for Kinky Boots and impossible to not wish that he had.

Whatever way you look at it, the book here is far from Fierstein’s best work. It’s a jig-saw puzzle of standard Fierstein characters, situations and barbs, with sentimentality sprayed over everything that threatens to be insightful. It’s obvious and extreme; subtlety is in short supply here.

There is a lot to laugh at and about, but not enough to sustain interest over the course of the evening. The central characters are not fleshed out sufficiently and not consistent; if they work, it is because of the individual characters and personalities of the actors.

For this work to join the great American Broadway musicals, it needs refining – book, score and direction all need more work.

Those end of Act finales are quite something and when one thinks of Kinky Boots, it is those two numbers (“Everybody Says Yeah” and “Raise You Up/Just Be”) which will ensure that pleasure is on the breath. Add the significant contributions of Lennox, Murphy and Henry and you have a West End hit which is better than its Broadway progenitor.