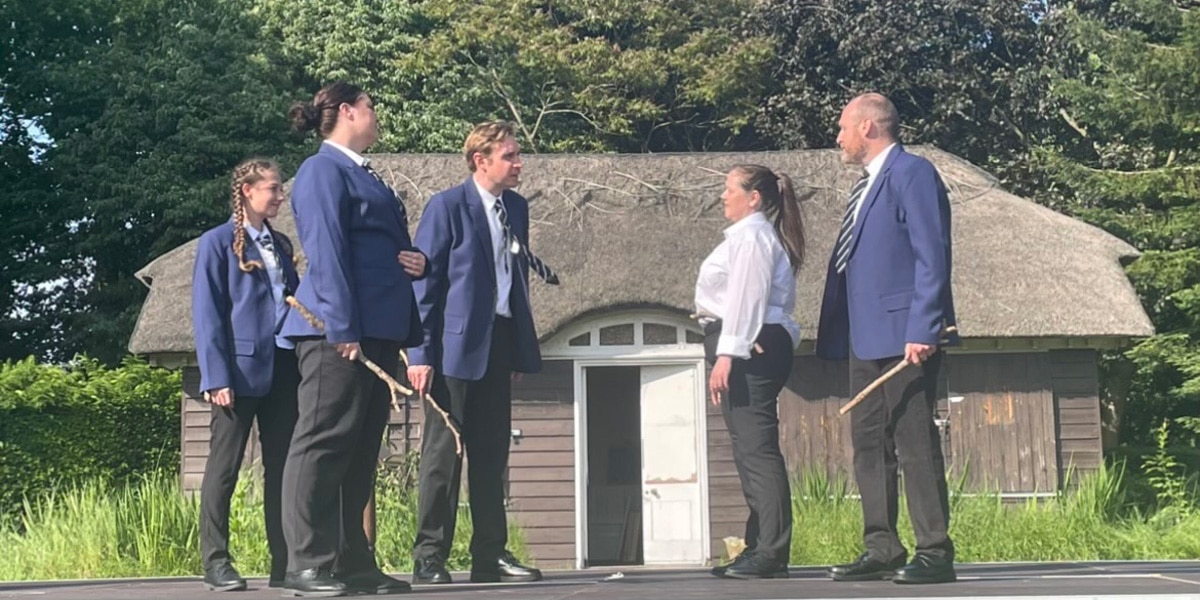 For the final production of the inaugural open-air season, Castle Park Theatre stage a contemporary version of Shakespeare’s most political play set in an English secondary school. It’s a concept that appears close to director Thomas R. Edward’s heart, but it struggles to make an impact out in the open air. I failed to appreciate why it’s staged this way unless it’s to make a parallel with public school hierarchy’s that lead to our politicians. Stripped down to a bare stage apart from two oil drums that have rhythms beaten on throughout, it’s lost in the open air, and victim to any distraction- passing joggers, dogs, youths, and the wind in the trees. A cast of five, including the director, are adults dressed in school uniforms, and while some sequences are effective, (deaths are staged particularly well), others, such as battles with sticks, look plain silly. The epic sweep of Rome looks like playground squabbles, and perhaps if younger people had performed it would have had a more effective “Lord of the Flies” appeal.

The main positive is the cast, who are a tight ensemble and fully committed to the vision. Thomas R. Edwards himself is a powerful Anthony, especially in the “friends, Romans, Countrymen” speech, and Roisin Keogh an excellent Caesar and Octavius, keeping focus on the shifting power systems. Ben Jacobson is a convincing Brutus and Charlotte Luxford plots effectively as Casca. The strongest performance, however, is from Grace Dunne as a commanding Cassius, making an outstanding Castle Park theatre debut. Vocally they are all excellent, the text clear as a bell, and they move as one.

Trimmed to a swift 90 performing minutes, (with a somewhat unnecessary interval), the production feels a little insular and may have benefitted from using the whole park space and not just the stage. The season opener, Ben Hur, had much more spectacle than this show, and, for me, that’s the main issue. Competing with the elements, open-air theatre does need to grab the attention, and that may be something to consider for future productions.