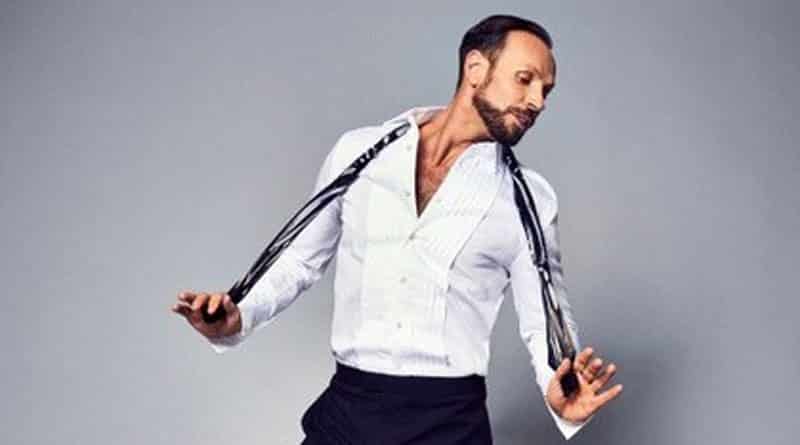 In The Closet is an autobiographical look at the life and career of choreographer, singer and Dancing on Ice judge Jason Gardiner, taking us through the inspirations, triumphs and adversity that bought him from Down Under to London via Hong Kong and America.

I’ve been aware of Jason since his beginnings as a cast member of both Cats and 42nd Street in Australia which coincided with the beginning of my life-long musical theatre addiction, an addiction it seems that neither of us has any desire to cure.

In The Closet is not exactly a cabaret, nor is it a one-man-show as such; what it is is a very personal piece of therapy as entertainment. Jason recounts highlights from his life and career; snippets of musical theatre classics fly by faster than anyone would have thought humanly possible. A melange of songs from A Chorus Line and West Side Story is followed by some Irving Berlin, Men At Work, Jerry Herman, Lionel Bart, Charles Strouse, Cy Coleman, Henry Kreiger, Cole Porter, Fritz Loewe, Richard Adler and Jerry Ross, John Kander, Andrew Lloyd Webber, Stephen Schwartz, Anthony Newley and even a smattering of Perren and Fekaris. Song snippets are sometimes used as written, sometimes slightly altered to fit a moment, or in some cases rewritten lyrically – some with success, some not.

It’s a good-humoured trip down memory lane but don’t get too comfortable, because when you least expect it Jason drops some bombshells from his past that are in one case quite horrific, and it’s a credit to the man that he is able to put those so very publicly out there.

You soon realise that Jason is far too big a force of nature to be contained or presented properly in an intimate venue like Crazy Coqs. Apart from his fab turn in Ruthless! at London’s Arts Theatre in2018, I realised I’d never heard Jason sing solo before. He has recovered from vocal surgery a few years back and is now very much in glorious voice. For most of the time, the show is spiced with drama and largesse to emphasise the accompanying narrative, but for me some of the best moments are when we get something soft and lyrical, clearly defined and all the more impactful because it holds a quiet truth without showbiz craziness.

It’s an evening of triumph over adversity and, as Jason himself puts it, a chance to make sense and make peace with his conflicted and colourful past, and in many respects he does just that in droves.

Jason is joined on stage by Sorcia and Ryan Joseph, who share vocals in some numbers and provide gorgeous harmony backing for others.

Phillip Foster has collaborated with Jason on this epic evening, arranging the music and providing his own style of gorgeous accompaniment at the piano throughout. It’s a joy to listen to Phillip’s rich playing which I can only liken to a two-handed orchestra always perfectly in check with the artist, as it should be.

There is only one thing that continues to make me uncomfortable about the evening. One particularly shocking recollection is accompanied by an arrangement of a well-known song that is so far removed from what happened that I found myself blocking out the lyrics so as not to associate that moment with that melody. It was probably constructed that way for dramatic effect, but I found myself resenting its use.

In The Closet plays until 2 February on various nights at Crazy Coqs. Hopefully, after the season here director Heather Douglas will work with Jason to edit some moments and give clarity to some of those frantic sections – where to quote that famous Hammerstein lyric – (he) could throw a whirling dervish out of whirl. Nothing has been said about further plans for In the Closet, but the one thing the show taught me about Jason, you should never expect the expected and secondly, he’s not someone to sit still – forward, ever forward.

What In The Closet has done is to give me a Jason Gardiner primer. I now have an even greater understanding and respect for the man. So many know Jason as the caustic character he created for Dancing on Ice, but there is so much more to be found. Here’s hoping that Jason might do another night where he interprets full versions of some of the snippets in this show. So packed with emotion and honesty were they that I am sure Jason’s life experience and fresh eyes would make us look again at well-worn stage musical classics, and ok maybe a bigger stage and some dancers!