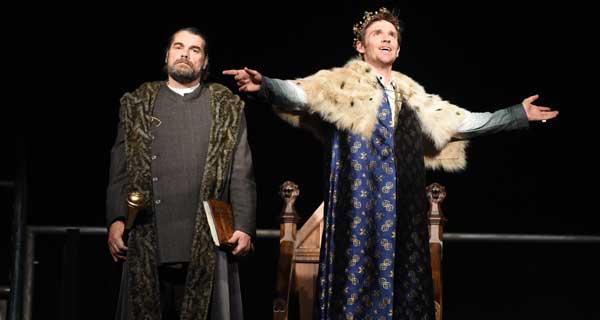 It starts with dancing and music. Gloriously tuneful music and simple, but sexy and effective, choreography. The giant sword is now adorned with gemstones; the set is more colourful, with fine gold print decorations adorning the regally blue walls. There is a palpable sense of joy – the Kingdom must be doing well. The clothing is much more modern in tone and kilts are in vogue. A stately female arrives – surely she is the Queen given her gown? The dance ends and the crowd disperses, and a young, pretty laundry girl takes a rest. The very attractive man in the black kilt, the one who has been ostentatiously dancing with the throng, strikes up a conversation with the girl. Does he know the King she asks. He is the King. Awkward giggles. Meaningful glances.

So starts James III, the final play in Rona Munro’s trilogy, The James Plays, now playing at the Olivier Theatre. It’s the sexiest of the three plays, the most modern and audacious in tone. Laurie Sansom brings a different style and sensibility to this play, creates an entirely different palette of emotions and drive for this third monarch, the one who is the wildest, the most flamboyant, the most erratic and, surprisingly, and perhaps counter-intuitively, the most regal.

James III ascends to the throne when his father is killed accidentally (one of his cannons exploded) and he is 8, but his mother rules as Regent for a few years. His ascension to the throne is unchallenged and in the early years of his reign, and following his marriage to Margaret of Denmark, Scotland’s territories stretched further than they ever had before. He is on the throne at roughly the time Richard III was angling for or in possession of the English throne. And he is a cultured creature, fascinated by the Renaissance and the inventions that go with it – he had coins issued which bore his image, the first Scottish king so to do.

Precocious and contrary, this James takes life at full throttle, cares not for the respect of noble blood, takes his pleasure where he wants and is happiest fighting or arguing. He has trust issues with everyone and his relationship with his brothers and sons is less than ideal. Lusty and ebullient, he is a monarch out of control, full of passion and wilful self-indulgence.

Munro’s approach to this play is, again, different to the earlier plays in the trilogy. This is really a play about the marriage between James and Margaret, she being the true, sensible ruler of the kingdom. By focussing the monarch’s story through the prism of the marriage, Munro creates two unforgettable characters and provides a dizzying insight into a capricious and uncertain time for Scotland.

Still, there are touches that unite. The roses planted by a previous James for his wife are in full bloom, and provide a clear link to James III’s past. Annabella, sister to James II appears here, now played by the glorious Blythe Duff: another link to the earlier play. The throne James I sat upon comes and goes, as James III does or does not do his duty. And, again, there is something ineffable about the playing for James III which makes him seem obviously the son of the parents we saw in the last play, James II and Mary.

Sansome imbues this play with a reckless, frenetic energy, a listlessness that reflects the monarch’s temperament and a sexy, splendid pulse that tantalises and intrigues. The story telling is very clear, very theatrical, but the sense of real history is strong.

In this version, James III is very bisexual, perhaps a reflection of his interest in the Renaissance and it’s art and splendours. He brings a mirror from Venice – the first true mirror to be seen in Scotland. It is a turning point in many ways as it allows people to see themselves clearly for the first time; never has knowledge seemed more powerful than when Queen Margaret uses the mirror to dispose of the laundry maid who the King has told is beautiful.

Jamie Sives is spectacularly good as James III. Impossibly attractive, vicious in word and deed, swaggering and also subtle, he gives a rich, finely detailed performance which is phenomenal in every respect. The moment when he takes off his shirt and follows his Queen to the bedchamber is as calculating and evocative a moment as I have ever seen on stage. His final petulant act of rebellion, when he pretends to be repentant, but then strips off clothes of suffering to reveal flashy garish nightclub attire and kisses his boyfriend, his personal assistant, Ramsay, in front of his court, is an ode to the rapacious theatricality of this mercurial Monarch. The final tableau depicting his death in battle is stunning. A terrific, spell-binding performance.

Daniel Cahill and Andrew Fraser are in fine form as the sons of James III. Cahill plays Jamie, the son treated with scorn and suspicion by his father, and he gives a beautifully judged performance full of pain and ambition. It is clear that he will be a great king in his time. Fraser plays the son favoured by James III, the one who is elevated to heir over his elder brother. He manages bewilderment and entitlement in equal measures and the scene where he tries to murder his elder brother is amongst the greatest highlights of the trilogy.

Blythe Duff as Aunt Isabella gets a chance in this play to go for laughs and pure heart – a chance she runs with. Her Isabella is pure delight, the scene where she bathes a particularly glorious moment of humanity. Everything Duff does is laced with perfection.

Mark Rowley is terrific as Ramsay, James III’s male lover. He positively exalts in the opportunities the role offers and it is easy to see why the King might be entranced by him. Gordon Kennedy is in good form as John, the adviser to the Throne, who may or may not have lustful thoughts for the Queen impeding his independent advice.

Ali Craig (Sandy) and Andrew Rothney (Cochrane) stand out in the smaller roles. Fiona Wood is winning as Daisy, the laundress who takes the King’s fancy and bed, although she might have done with better control in the devastating scene (for her) where she sees her reflection in the mirror for the first time.

Unfortunately, the big name in this cast, Sofie Gråbøl, she of the jumper from The Killing, is not quite equal to the demands of her role. She is half of the play and she has a momentous speech at one point which, alas, is simply thrown away. For the most part, she is charming and believable – but in the heightened moments, the interludes of real power, she has not enough gravitas and technique to create stunning moments of raw power. It’s the one slight misstep in the trilogy. It’s not fatal by any means, and much that Gråbøl does is enjoyable and classy – but she just misses the key moments which is a great pity.

Still, the overall effect is magical. The whole company rejoice in the possibility of the work and their combined energies, led by Sansom’s wonderfully clear and cogent direction, makes this third play of the trilogy an exciting, wonderful experience.

Seeing all three plays in one day perhaps enhances the experience. After seven and one half hours of historical drama, presented in different and intelligent ways over the course of three plays, I just wanted to see what happened next. What did James IV have to offer?

And that desire, that need to see more, speaks volumes about the scale and wonder of the Sansom/Munro achievement here. A fabulous cast, a fabulous notion, a fabulous sense of style – great, truly great theatre. What a pity it is not running forever. Everyone – absolutely everyone – should be able to see this extraordinary achievement.